Development of the TTY – Part IV: The Final Chapter

This week at Hearing International marks our “Final Chapter” in the development of the TTY. Over the past few weeks we found that the story began with Robert Weitbrect’s invention of the acoustic coupler, a collaboration with Dr. James Martens and Andrew Saks (see Part I, Part II and Part III). These pioneers of the TTY became known as the “trio” that led to the development of a telephone communication system for the deaf.  According to ITU News (2011), the trio formed their own research and development company called  Applied Communications (APCOM), Inc., the main purpose of which was to develop practical telecommunication equipment for use by deaf people. The three partners invested their own money in the company and marketed the “Phonetype” modem, as Weitbrecht’s acoustic telephone coupler was known, and Marsters embarked on a nationwide tour as the company’s spokesperson, praising the TTY’s effectiveness and stressing the need for everyday safety. He urged deaf people, hospitals and fire departments to install the machines for emergency calls. 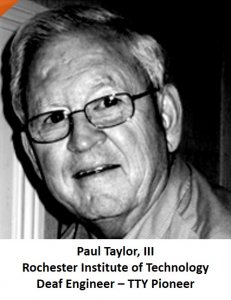 Another significant pioneer in the history of the TTY is Dr. Paul L. Taylor, III of the Rochester Institute of Technology/National Institute for the Deaf. Having viewed the video phone in the mid-1960s at a World’s Fair, Taylor become interested in Weitbrect’s invention. Weitbrect sent Taylor a coupler which he tuned to old Western Union Teletype machines and became intimately involved in the TTY movement. He then distributed these early, extremely non-portable devices to the homes of many in the deaf community in St. Louis, Missouri. (Click on Dr. Taylor’s picture for an inspirational video of his contributions to telecommunications for the deaf). 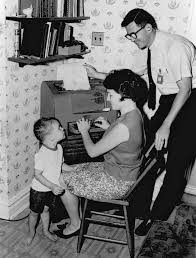 Taylor worked with others to establish and launch a local telephone wake-up service in the early1970s, which then expanded to a statewide system. Beginning in the St. Louis area and later throughout Missouri, Taylor’s TTYs were used in programs to teach deaf people to communicate with each other. While these successes were on a relatively small scale at first, the engineers at RIT/NID heard of his program and asked him to join the faculty at the Rochester Institute of Technology.  One of his passions was the establishment of relay networks for the deaf which offered them independence in connecting with hearing people for appointments, business interactions and other necessary communications. Previously these conversations were cumbersome and even nonexistent in many cases. 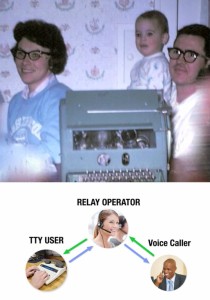 Here’s a sample TTY conversation with a TTY; GA means “Go ahead” and SK means “Goodbye”.

Caller A HI, THIS IS JOHN, CAN I ASK WHO IS CALLING? GA
Caller B HI JOHN, ITS ME FRED, I AM WONDERING WHERE YOU ARE, ITS GETTING LATE TO GO OUT TO THE PUB GA
Caller A HI FRED, SORRY I DONT THINK I CAN GO GA
Caller B WHY CANT YOU GO? GA
Caller A MY WIFE IS NOT FEELING WELL AND I HAVE NO BABYSITTER FOR MY KIDS! GA
Caller B AWWWW DARN. I WANTED YOU THERE. OH WELL WHAT CAN YOU DO ? GA
Caller A I KNOW.. I GOTTA GO. THE KIDS NEED ME. SEE YOU AROUND! BYE FOR NOW SK
Caller B OK NO WORRIES SEE YOU SOON! BYE BYE SK GA
Caller A SKSK (THE PARTY HAS HUNG UP)

Relay systems were popular in the beginning of the use of TTY systems:  Here is a sample of an early relay call, in which the operator would provide voice translation to the hearing person of the Deaf person’s written message, and then type out the speaker’s spoken message for the Deaf person to read. 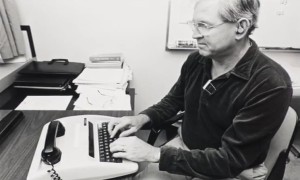 Noticed for his work in the relay and working with telecommunications, Paul Taylor eventually became Chair of the Engineering Support Team at the National Technical Institute for the Deaf in 1975 where he remained for 30 years, continuing to innovate and advocate for telecommunications for the deaf.  Dr. Paul L. Taylor’s devices and relay systems were the beginnings of a movement that would be essential to communication for the deaf in the next decades.  There were a number of others who significantly contributed to the development of the TTY, later called the Telephone Device for the Deaf or TDD, refining the technology to be smaller, less cumbersome, and more accessible through phone company subsidies for equipment and service making the use of the telephone a reality for the deaf. 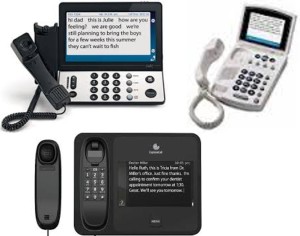 In the new century, telecommunication has flourished in the United States and Europe in particular.  The US passed the Americans with Disabilities Act which profoundly changed how society views and accommodates its citizens with disabilities.  President George H.W. Bush  signed Americans with Disabilities Act (ADA) into law on July 26, 1990.  The ADA  has helped create a society where curbcuts, ramps, lifts on buses, as well as telecommunication for the deaf are increasingly common.  Full companies such as CaptionCall and CapTel now make special phones for the deaf that are free from the US government to facilitate their communication.  These phones provide text as well as auditory communication so that if anything is missed in the conversation it can be read.  For those that are deaf, the whole conversation can be read on both ends of the conversation, but with a 21st Century device.  (Click on the Caption phones for an informative video).  Both of these companies, funded by the US government now even offer no cost smartphone applications for a mobile offering.

These are easily used and make the use of the phone by the deaf and hard of hearing easy and seamless.  While televisions have had captions for many years, Dr. Taylor’s miracle of the video phone is now possible for the average person through the use of special phones or more recently, the use of apps available for most smartphone through Face Time, Skype, or other applications that allow viewing the person that is being called facilitating the use of sign language by phone. 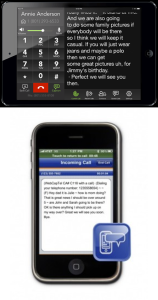 Hearing aid manufacturers have also gotten the message by offering devices that allow for phone connections for land lines, cell phones and other easy connections. Over the past couple of years Apple smartphones  directly connect the phone to hearing aids greatly facilitating communication and reducing stigma for the hard of hearing.

In this journey of the development of the TTY/TDD and beyond, probably the best reference available is the discussion of the development of this communication system by Dr. Harry Lang, a deaf professor and researcher at the University of Rochester.  Dr Lang has compiled a significant history of the TTY, its development and the brilliant contributions of deaf engineers, business professionals, researchers and the sons and daughters of the deaf that chronicles their telephone frustration into a system that now is accessible to all.

Lang, H., (2000). A phone of our own: The deaf insurrection against ma bell. Gallaudet University Press, Washington. Retrieved January 18, 2016.

Lore of whose Listening (2012). History of TTY that deaf people use to communicate. Whoselisteningtome  Retrieved January 11, 2016.

The Center for an Accessible Society (2000). The Americans with Disabilities Act.  Retrieved February 1, 2016.