Hearing Aids Made for iPhone®

Like many technical fields, audiology is rife with acronyms. Many are identical to those used in other fields, to the consternation of anyone trying to learn them. Take “REM” or “CIC”, for example. Recently, a new acronym has begun to make inroads in audiology, or at least in the area of hearing aids: “MFi.” An abbreviation for “Made for iPhone/iPod/iPad,” MFi is a licensing program from Apple for developers of hardware and software peripherals that work with their iOS devices (iOS is the proprietary operating system for Apple devices). It means that an electronic accessory has been designed to connect specifically to iPhone and has been certified by the developer to meet Apple performance standards. Manufacturers who join this program are allowed to display related logos on their products. When speaking of hearing aids, these “peripherals” may be accessory devices that communicate with iOS devices, or they may be the hearing aids themselves.

Does it matter that hearing aids or hearing aid accessories can connect to smart devices? After all, the majority of hearing aid users and candidates are older individuals. It is common to assume that people in this group are non-users of electronic “gadgets.” As an illustration of this in popular culture, the host of an evening talk show recently riffed on the news that hearing aids could now connect to the iPhone, joking “Now, if hearing aid users only knew what an iPhone was.” However, recent data on usage of smartphones and tablets points to two important trends among older individuals. One is simply that ownership of these devices is growing rapidly year over year. The other is that a significant percentage of older individuals already own smartphones or tablets. One in five clients over the age of 70 is likely to be a smartphone user and an even greater proportion will have tablets. These numbers suggest that many hearing aid candidates will find it relevant that their hearing aids can communicate with smart devices regardless of their age.

Audio is not the only signal that can be transmitted via Bluetooth. Data can also be transmitted in both directions, giving the user information about their hearing aids as well as additional ways of interacting with them beyond whatever on-board controls the hearing aids may have. For this to work, the hearing aid manufacturer writes an app that can be downloaded to the user’s Bluetooth enabled smart device. The most common function of such an app is to provide remote control of the hearing aids. In order to distribute their app for iOS devices, the manufacturer must join the MFi program and meet Apple certification requirements. The ReSound Phone Clip+ is an example of an MFi wireless hearing aid accessory. It relays data from the ReSound Control app via the Bluetooth link to the iPhone to provide remote control functionality for wireless ReSound hearing instruments. 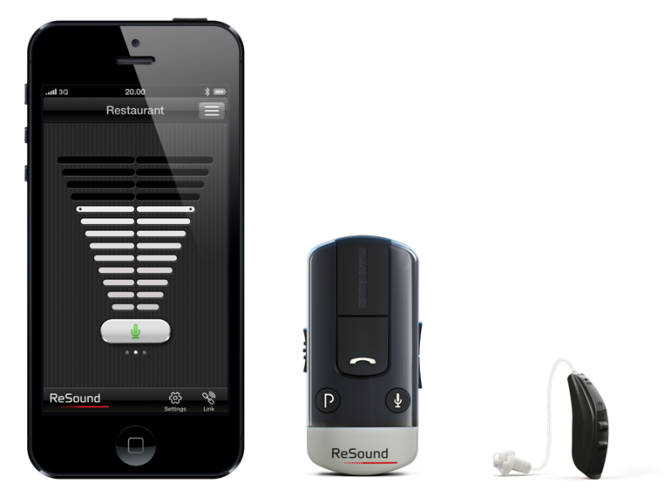 Until now, it has not been feasible to implement Bluetooth directly in hearing aids mainly due to power constraints, thus necessitating a wireless accessory for any communication with cell phones or smart devices. However, Bluetooth version 4.0 includes a low energy feature which meets the power constraints of hearing aids. Branded by the Bluetooth SIG (Special Interest Group) as “Bluetooth Smart,” this technology is a “power-friendly” version of the open Bluetooth wireless standard and has become popular particularly for monitoring devices like heart rate monitors and fitness trackers.

So what can MFi hearing aids do? One of the most attractive features of MFi is audio streaming in high quality stereo. Any type of audio played from an iOS device can be streamed to MFi hearing aids, including music, podcasts, games, Facetime calls, Netflix, or YouTube videos just to name a few. While all of these uses certainly can add to the enjoyment and utility of using an Apple device, perhaps the most significant benefit is the streaming of phone calls to the hearing aids. Phone use is made difficult by the absence of visual cues, inappropriate or inadequate coupling to the phone and the presence of background noise. Not surprisingly, many hearing aid users feel they are unsuccessful on the phone. Receiving the phone signal directly from the phone to the hearing aids with no intermediate accessory provides an obvious benefit in terms of convenience to the user. In addition, it has been established that a bilateral wireless signal optimizes benefit for hearing on the phone.1 A recent study of the benefit of different phone options including MFi reinforced this finding, but also suggests that MFi may provide additional benefit compared to streaming the phone signal via a wireless accessory with conventional Bluetooth.2 In this study, listeners were administered an adaptive speech-in-noise test with the speech presented unilaterally in four different telephone conditions:

As presented in Figure 4, performance in all wireless conditions exceeded the “Acoustic Phone” condition. The authors also noted that the greater variability for the “Acoustic Phone” and “Telecoil Phone” conditions than the two digital wireless conditions, which they attributed to individual difficulties in placing and maintaining the telephone correctly for signal reception. As a result they predict more reliable benefit with the digital wireless solutions. What is also striking about these results is that the MFi condition was significantly better than either the “Telecoil Phone” or “Phone Clip+” conditions. This was in contrast to the expectation that the two digital wireless phone solutions would yield equivalent results. The authors speculate that this may be related to a decline in signal quality caused by the extra link needed when using a Bluetooth-based hearing aid accessory (phone-to-accessory-to-hearing aids). 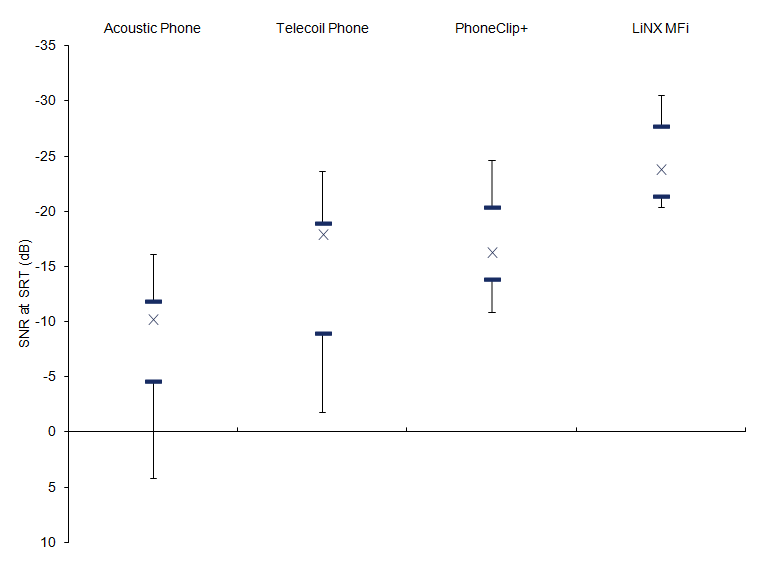 As mentioned, MFi also gives users the opportunity to manage their hearing aids from the iOS devices. In the case of the ReSound LiNX, the ReSound Smart™ app enables this functionality. First of all, the ReSound Smart app serves as a remote control for the hearing instruments. Users can change programs, adjust volume and choose the input to the hearing aids. One adjustment type allowed by the ReSound Smart app that typically is not available to hearing aid users is an adjustment of treble and bass. This can be particularly useful for specific listening situations, such as music listening. Additionally, this app offers the capability to associate specific hearing instrument settings including the listening program, volume and treble/bass adjustments with a geographical location. This functionality is called “geo-tagging.” Finally, a “find my hearing aid” feature can help locate a misplaced device, and tutorials provide usage and troubleshooting advice that is easily accessible. 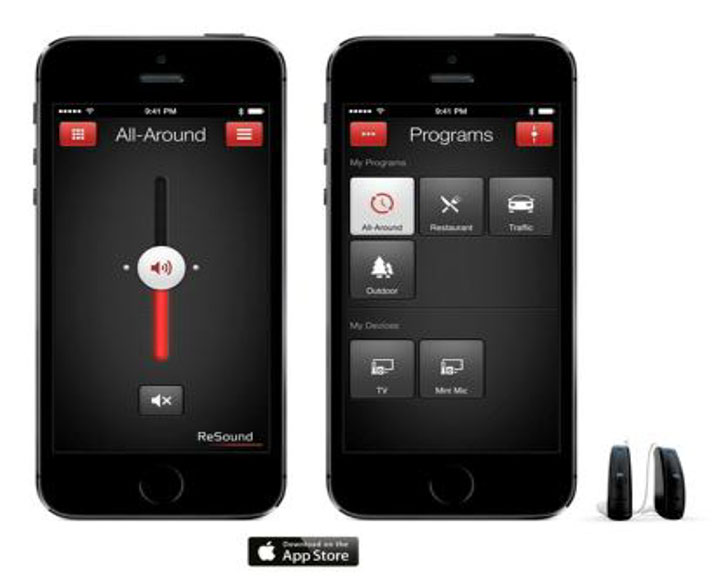 The next development in direct connectivity to smart devices will be apps such as the ReSound Smart app for the Android operating system. Because the ReSound LiNX is a Bluetooth Smart device, it is possible to write apps for other operating systems that can be downloaded to Bluetooth Smart ready devices like Android smart phones and tablets. Like the ReSound Smart app for iOS, this will allow users remote control functionality as well as other features that involve data exchange between the hearing aids and smart device. The ReSound Smart app for Android is planned for late 2014. Since there is as yet no standard audio streaming protocol that is appropriate for direct connectivity to hearing aids, it will be longer before this functionality is available for other operating systems or other manufacturers’ smart devices.

With all the excitement about MFi, it can be easy to either forget about what other features MFi hearing aids offer, or to shelve them as products that are only appropriate for those clients who already own or who are planning to acquire an Apple device. However, MFi is really a secondary feature, one that at some time in the future may be considered a given in the same way that hearing aids today are expected to have noise reduction algorithms or telecoils. The purpose of an MFi hearing aid is first and foremost to provide amplification of speech and other sounds for persons with hearing loss. The ReSound LiNX is actually a tiny but full-featured receiver-in-the-ear instrument with the same advanced Surround Sound by ReSound technologies available in the ReSound Verso, with the addition of new signal processing algorithms for frequency compression (Sound Shaper) and automatic gain adaptation (Acceptance Manager). It offers a revamped receiver program for fitting hearing losses up to the severe-to-profound range. Furthermore, the ReSound LiNX continues to support the proprietary ReSound 2.4 GHz wireless system. This means that device-to-device wireless program change is available as are the advanced wireless steering algorithms that support binaural hearing. In addition, the ReSound LiNX is fully compatible with ReSound Unite wireless accessories, which provides users with a complete range of connectivity options for any audio sources, not just iOS devices.

“Made for iPhone” means that an electronic accessory has met Apple standards to specifically work with iOS devices. MFi hearing aid accessories are go-between devices that use standard Bluetooth wireless technology to provide connectivity between an iOS device and the user’s hearing aids. MFi hearing aids take this a step further, in that they use the low energy feature of Bluetooth to provide direct connectivity between hearing aids and Apple devices. Wearers of MFi hearing aids can stream high quality audio in stereo from iOS devices directly to their hearing aids. Phone usage via wireless streaming bilaterally has been shown to be advantageous, and some evidence has emerged to suggest enhanced benefit with MFi. Connectivity to iOS devices also extends to data, allowing users to control and interact with their hearing aids in new ways. The ReSound LiNX is a fully featured MFi hearing aid that is appropriate for most hearing losses, offers wireless device-to-device communication, and is also compatible with existing ReSound Unite wireless accessories.

© 2014 The GN ReSound Group, all rights reserved. Apple, iPhone, iPad and iPod touch are trademarks of Apple Inc, registered in the U.S. and other countries. Bluetooth is a trademark of Bluetooth SIG, Inc.