Am I A Hearing Person Wannabe?

The green-eyed monster rises up in me every once in a while. I can’t help it – it’s human nature. My human nature.

There are occasional moments, when stabbed in the heart with envy, I look at a hearing person (someone with no hearing loss) and think, “I wish I were you.”

Usually it’s more like, “I wish I could do that!” Because truly, I don’t want their looks, money, career, body shape, or Twitter followers. All I want, every once in a while, for even just a few minutes, is their ability to hear. To “get it” in real time, in the moment, unaided, without struggle, without working at it.

In those green-eyed moments, I engage in a little bargaining. I’d scrub heaven’s floor in the morning and polish the gates of hell in the afternoon, just so that I could experience effortless hearing. This is deep confessional stuff for a woman who, for the past 20 years, has been writing and talking about how it’s possible and doable to live well with hearing loss. We just need to learn our stuff, keep our elbows up and be ready with a good sidekick and occasional head-butt to smash through the barricades to better communication. 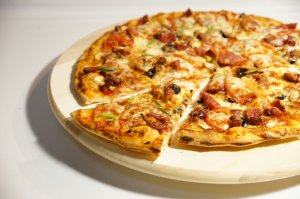 My friend Myrtle says, “Hearing people do what they do best—they hear.” They’re not more worthy than me just because they can hear the ‘T’ in ‘pizza’. (Bet you’re pronouncing ‘pizza’ to yourself right now, aren’t you?) I don’t feel inferior; my sense of self-awesomeness is intact. But I like saying things correctly and the fact that they can hear that T-in-pizza amazes me. I only found out about it when a friend said she couldn’t stand hearing me say pee-zuh anymore. Why didn’t my mom tell me how to say it right when I was a kid? It would have saved years of peezuh-eating.

Since then, I sometimes ask friends how to say words if I’m insecure about pronunciation, although I can spell and define them with ease.

So what do hearing people do so well that I’m willing to deliver meals on wheels to Hell’s Angels to be like them? They can talk through walls, for starters. A kitchen-to-living room-conversation is nothing for these folks. They can hear anything fall out of their pockets; if there’s no other sound, I may hear my car keys smack the pavement, but the soft plfth of a leather glove? No way.

Hearing people can carry on a conversation while reading the horoscope, or doing anything else. If someone wants to talk to me, I have to stop and give them my full attention. Going to the movies is tougher for me because if I whisper questions to my partner, I don’t hear the response – which he usually doesn’t give because he knows I won’t understand him anyway. 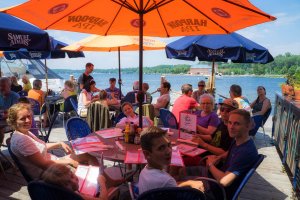 People with perfectly functioning cochleas can chat while lying in bed at night, in the dark, and then start right up again in the morning before they even open their eyes, without fumbling for hearing technology. At dinner parties, they don’t slow down the group discussion or put it into reverse with frequent pleas of “what did she say” or “who said that?” or “what are we talking about now?” They can understand, and you won’t believe this, people talking behind them! They can make sense of the brogue of a bearded Scot and guys from Newfoundland. They can identify a bird by its birdsong—and what tree it’s in.

I would love not to have small children go shy and silent when their mommy tells them, “You have to get the attention of Gigi (short for Grandma Gael) before you speak to her. And face her. And speak up.” What 2 ½ year old is going to say anything after that?!

Usually these things don’t bother me, but it’s a secret guilty pleasure to give in to my inner Green-Eyed Monster now and again. And I don’t want to visit heaven or hell – or Hell’s Angels – any time soon. In the meantime, I’ll keep kicking down those barriers and asking people for help with the tough words to hear.