This paper presents is summary of sound levels measured inside nightclubs featuring loud music and a study of the hearing damage risk potential to the employees and patrons.

Due to a recently implemented by-law in the City of Toronto, HGC Engineering has had the opportunity to measure the sound levels associated with numerous nightclubs, most of which are situated in Toronto’s Entertainment District. The nightclub industry in Toronto is quite intensive, with over one hundred clubs located in the one square kilometre area of the Entertainment District. The high concentration of nightclubs in the area, coupled with high density residential development, has triggered concern amongst residents and city officials, with regard to the environmental (outdoor) noise emissions of the clubs.

A City of Toronto by-law requires nightclubs to assess their environmental sound emissions to ensure that the emanating sound does not disturb citizens travelling, or living in the vicinity of the subject club. While the formal purpose of the work conducted was to measure outdoor sound levels and assess compliance with the applicable bylaw, measurements were also conducted inside the nightclubs for reference purposes. The results of these measurements are summarized in this paper.

Sound levels were almost always found to be significantly higher than the applicable Ministry of Labour workplace noise exposure regulations at locations where nightclub employees (wait staff, bar tenders, etc) and patrons spend much of their time. Furthermore, staff and patrons were typically not observed to be wearing hearing protective devices (HPDs).

The regulatory body responsible for defining the applicable sound limits for worker exposure is the Ontario Ministry of Labour. They have developed a regulation intended to protect the hearing of workers exposed to high sound levels in the workplace. It contains the noise exposure limits and expresses the way in which to calculate the potential for employee noise exposure to cause hearing damage.

The content presented herein is not intended to represent a thorough review of the regulation and its application within the industry, but to raise awareness and bring light to the fact that employees in the nightclub industry could be incurring significant damage to their hearing.

2. Description of the Subject Facilities

Sound level measurements were conducted inside over 60 nightclubs in Toronto, most of which were situated in Toronto’s Entertainment District. The areas in nightclubs that are exposed to the high sound levels are generally the areas surrounding the main dance floors. Bars serving beverages are frequently positioned adjacent to, and therefore within the same sound field as the dance floors, resulting in employee exposure levels similar to that of the patrons, but for extended periods of time. Furthermore, walls surrounding these areas tend to be constructed of either brick or painted gypsum board, and these workplaces are therefore reverberant in nature, such that sound levels may not decrease significantly with distance from the source. Sound systems vary in set-up and size, depending on the size and layout of the venue, and tend to range from 10,000 to 40,000 watts in power.

As indicated above, noise exposure in the workplace is governed by the Ontario Ministry of Labour, who, in 2007 published “Amendments to Noise Requirements In the Regulation for Industrial Establishments” (Regulation 851, Section 139 of the Occupational Health and Safety Act). This regulation states that “Every employer shall ensure that no worker is exposed to a sound level greater than an equivalent sound exposure level of 85 dBA, Lex,8.” The Lex,8 is a representation of the time-weighted average noise exposure level over an eight hour work shift. Thus, the calculated Lex,8 accounts for varying noise levels throughout a shift, and/or shifts that may be shorter or longer than eight hours in length. For reference, Table 1, below, outlines the allowable Lex,8 exposure levels, given a specific shift length. 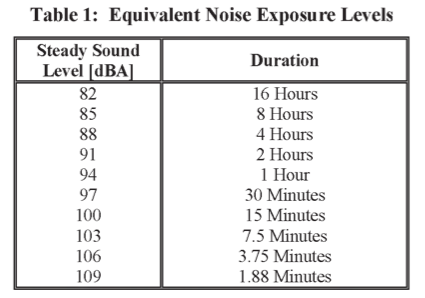 Sound level measurements were conducted using integrating sound level metres set to record the sound levels as a function of both frequency spectrum in octave bands, and time, on a second-by-second basis. From these measurements, the average (Leq) sound levels in A-weighted decibels were calculated. While the measurement periods did not extend the duration of an entire work shift, they can be considered to be generally representative of the typical exposure levels throughout a shift for an employee working in the vicinity of the sound system and/or dance floor, as indicated by the club managers, and by personal experience.

The overall measured dBA sound levels are included in Table 2 below. 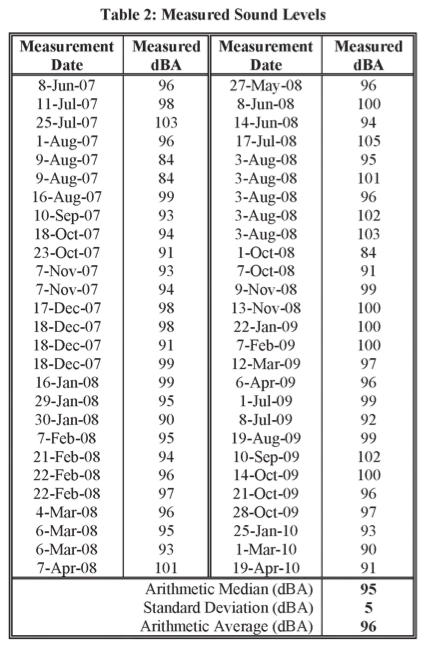 The overall average sound level in all of the nightclubs was 96 dBA. Depending on the nightclub, work shifts typically do not last a full eight hours. It is safe to assume that many bartenders and weight staff are exposed to sound levels of this magnitude for a period of four hours, which would result in an Lex,8 exposure level of 93 dBA. Even if employees were exposed to this average level for two hours, the resulting Lex,8 sound exposure level would be 91 dBA. Both of these situations represent significant excesses over the applicable exposure limit

Interesting information can also be gathered from the frequency spectrum of the measured sound levels, several of which are shown in the following Figure 1. 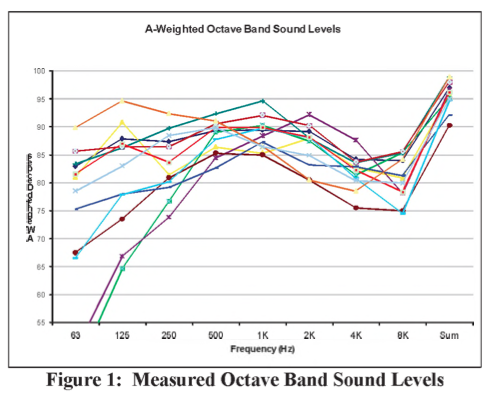 Generally, the human ear is the most sensitive to the higher frequency bands of the sound spectrum (i.e. 1000 Hz to 4000 Hz). Because of this, human hearing is also the most vulnerable to sound in these frequency bands. As can be seen in Figure 1, the A weighted sound levels in these bands tend to be relatively high. It is clear that the measured sound levels and frequency content present a risk of hearing loss.

It is unlikely that voluntarily reducing the interior sound to levels to less than 85 dBA would be considered feasible, as patrons visit the subject establishments often for the purpose of listening to music at high levels. Moreover, the use of hearing protective devices is not generally considered to be viable by staff as frequent verbal communication with customers is vital. Further study of communication ability with HPDs in high noise environments may be helpful with regard to educational possibilities. The installation of absorptive acoustical panelling to the walls of some of these spaces may be beneficial to some degree, by reducing the reverberation of the sound in the upper frequency bands and thereby lowering sound levels at locations remote from the dance-floor. Such treatments would have little effect close to the source.

The results of these measurements indicate that it is likely that workers employed at nightclubs are frequently exposed to sound levels greater than those outlined in the Ontario Ministry of Labour Occupational Health and Safety Act, Regulation 851, Section 139, and are at risk of hearing damage. Technical solutions short of “turning down the volume” or wearing HPD’s are limited.