Suppose we want to measure the length of an object. We use a ruler or a measuring tape and we express the result in metres, inches or something similar. Simple, right?

Now, suppose we want to find the weight of the same object. We use a balance and we express the result of the measurement in term of kilograms, pounds or in their fractions.

Why we cannot do the same when measuring sound or noise? Yes, we use a Sound Level Meter (SLM), but then we come up with a cacophony of terms and units that can make our life miserable? We get immersed in dBA, sound pressures, intensity, levels, etc. Do we need all of those? Most probably, no! It depends what you want to describe/measure, but still you have to know which term to use and when!

Here is help coming, trying to clarify some basic terms used in acoustics.

What's sound? There are two ways of defining sound. One is well known: a sensation detected by our ears and perceived by our brain. In other words, everything we can hear. The second definition is done by physics and refers to a vibration that propagates as a typically audible mechanical wave of pressure and displacement, through an elastic medium such as air or water. Don't like the second definition? Then stick to the first that is closer to our daily experience.

So, sound is what we hear. Right? Yes, indeed! We do also hear noise, speech, music, etc., are they all sounds? Yes, they are!

So, what about noise? Here, again, there are a couple of definitions. Probably you have heard the familiar “sound is what I do and noise what my neighbor does.” Another one is “Noise is an unwanted sound” (that has some philosophical interpretations regarding what’s “wanted and unwanted”). Finally, there is this found in physics books that define noise as a sound random in nature, the spectrum of which does not exhibit clearly defined frequency components.

As a summary, we can say that noise is a just a type of sound.

Here are two terms that are frequently misused: sound pressure and sound intensity.

What? Are they not the same thing? Don’t we use to talk about the intensity of a musical passage? Besides, pressure sounds a bit pedestrian, like someone pushing you, while intensity appears more ethereal, sentimental, etc.

Definitely, we may have them as synonyms in colloquial speech, but not when dealing with well-defined physical magnitudes.

Let’s go back to the beginning. High school physics tells us that sound is vibration of air molecules, that when impinge on our ear drum elicit the sensation of hearing. So far, so good! When both arms of the tuning fork are vibrating, they are pushing the molecules that are in contact with them. Those molecules push those surrounding them and so on. As a result sound travels through the air creating the phenomenon called “propagation.” Sound propagates at a speed of approximately 330 m/s in air (some 1,235 kilometres per hour). The speed is higher in the water (1497 m/s) and even higher in solids (e.g. 6000 m/s in steel).

As with the tuning fork, the same happens with speech: when talking (or singing) our vocal cords put in vibration the air molecules that are “touching” them. They push the adjacent ones and the vibrations propagate. That is how our speech can be perceived at a distance.

Now, what happens to the molecules that are touching our tympanic membrane? Well, they cannot move further, because the membrane, as a wall, does not budge. (This is not exactly true, since the vibration of the molecule is transmitted with much smaller amplitude to the membrane). So, the molecules are pushing against a surface, in the same way as our hand pushes against a wall. The net result is a pressure. In the case of the little molecules, it is sound pressure we are talking about. It is very small, but still a pressure. It even has a unit: “force per unit of surface” (N/m2 or Pascal – Pa).

But what about sound intensity? Imagine this time a balloon that vibrates. In other words, its surface periodically increases and decreases. Here, again, we will have molecules pushing each other and the sound will travel from the balloon outwards. It is easy to understand that the further the sound travels its energy is spread over a larger surface (Figure 1). Therefore the energy per unit of surface becomes smaller. Now, obviously there is a relation between energy and pressure. Therefore, since the energy is decreasing, the pressure is decreasing too. This is why the further we are located from a sound source, the weaker is the sound that we perceive. So, now we can define another sound magnitude: the sound intensity, as the “energy per unit of surface” (W/m2).

Here we can see that sound pressure and sound intensity are two completely different birds of prey, even though both refer to sound. And, the main difference is that 99% of the time, we deal with sound pressure, since intensity is something used seldom and for very specialized applications.

One more difference (probably the main one from the practical point of view): what we measure using a sound level meter is just sound pressure. Measuring intensity requires sophisticated (and expensive) instruments that few professionals possess and know how to operate.

The relation between the weakest sounds pressure that we can hear and the one that can destroy our inner ear cells is over 1:1,000,000. Quite large and difficult to manage, right? Transforming sound pressure to SPL implies a mathematical procedure that reduces this relation to only 120 units, called decibels (dB). Decibels are easier to measure and use.

You have probably seen a table similar to Table 1 below. Some have more details, but the concept is the same. Between the faintest sound perceived by our ears (= 0 dB) and the one that can shattered them and that forces us to plug our fingers in our ears (=120 dB), there are only 120 dB! There are other properties of the decibels. For instance an increase of 3 dB is equivalent to a doubling of the sound energy. A 10 dB increment sounds like doubling the loudness. 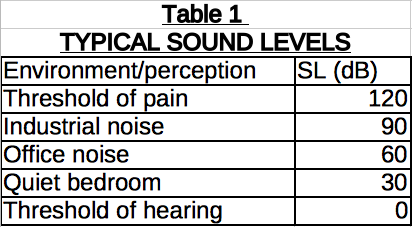 In summary, when in doubt, use the term “sound pressure level” or “sound level” and you will be right 99% of the cases!

And Finally, the dBA

So, you assumed that dB was the end of the story. Not so fast: our hearing is complex enough at to have only one way of measuring noise.

However, some 15 years later, people became very interested (and they are still) in occupational hearing loss and hazardous noises. They found that when the noise was measured using this filter (and called dBA) the resulting sound level was proportional not only to the hazard to hearing, but also to annoyance. The result is that today national and international standards, provincial and municipal regulations all around the world that deal with hazard and annoyance, they all require noise levels to be measured in dBA.

Does it mean that the book is closed and that dBA applies to all situations? Definitely not! When measuring in dBA, the acoustical energy at low frequencies (below 500 Hz) is largely ignored. This is acceptable in most situations involving industrial and transportation activities. However, an excess of low frequencies may be quite annoying even if the SLM reading in dBA is acceptable. Examples are noise generated by wind generators, large power transformers and large compressors used by the gas and petroleum industries.

So, Where Do We Stand Now?

To sum it all, all we hear is sound that can be noise, but also speech, music, warning signals, etc. Sound propagates from its source and it is perceived at different sound levels that range from 0 to 120 dB. We measure those levels using a sound level meter that, when dealing with hearing hazard or annoyance, uses a special filter, “A” and the result of the measurement is known as dBA.