A Case for Mid-frequency Amplification?

Most individuals with hearing loss are affected mostly in the high frequencies. And, because consonants–those phonemes (distinctive speech sounds) that are believed to enable humans to differentiate one word from another–are high-frequency sounds, hearing aid fitting formulas universally call for high-frequency amplification. This continues to be a take-off of the old “audiogram fitting” approach (although with less gain, but still tending to mimic the audiogram), but those writing fitting formulas today would have a field day arguing this comparison.

Part of what I write about has to do with history related to hearing, and one part that never ceases to amaze me is that so much of what was written years ago, is still applicable today. This is especially true for topics related to psychoacoustics and acoustics. Hearing had significant contributors whose work continues to stand the test of time.

Many years ago I wrote about the significance of mid-frequencies when fitting hearing aids[1]. I was recently reminded of that article, re-read it, and found that the topic continues to intrigue me. Therefore, this post will look back to review what the “ancients” had to say about mid-frequencies, and to suggest again that we look to see if their information applies to current hearing aid fittings. Much comes from the original article.

The mantra of the late 1970s was to recommend high-frequency hearing aids not only for high-frequency losses, but even for flat losses[2][3]. A resultant problem was that acoustic feedback emerged as a major fitting concern. The feedback-reduction circuitry of today was not available then, with feedback managed by either employing a notch filter at the suspected feedback frequency region, or to roll off the high frequencies (in opposition to the intended goal).

Amplification of high frequencies is understandable, but it is a fact that hearing aid user satisfaction continues to be an issue despite the many significant hardware and algorithm improvements in hearing aids throughout the years. Is it possible that useful mid-frequency information is being ignored, even today? Many would agree that even judicious use of high-frequency amplification alone is not the answer. Might there be benefit in reviewing mid-frequency contributions again?

What is it about mid-frequencies that warrant attention, if anything?

The spoken message exists in different forms in its progress from the mind of the speaker to the mind of the listener. These take the form of linguistic, physiologic, anatomic, and acoustic aspects of speech production and perception. This post will not consider all of these, but limit discussion to some of the factors that are involved at the listener’s end that are frequency related and have an impact on speech perception.

It should be obvious that many things are important in the recognition and interpretation of speech – not just the frequency response! Still, in spite of this, and for a variety of reasons, high frequencies have been elevated to the position of significance in hearing aid fitting. What follows is an attempt to show that even time-accepted data might not support the almost blind devotion to high frequencies. What is even more interesting is that attempts to equate pure-tone hearing losses and word recognition scores seem not to provide much useful data.

Frequency and energy considerations often are given substantial emphasis to justify high-frequency emphasis. These will be reviewed in terms of: (1) the average speech spectrum; (2) power, frequency, and intelligibility; (3) critical bands; (4) crossover frequency; (5) energy bands; and (6) intelligibility versus bandwidth.

The average speech spectra (energy vs. frequency) measured for men and women over a long period of time is shown in Figure 1, after Dunn and White, 1940[4]. Little difference is shown between the male and female voices. It is also obvious that most spoken energy is below 1000 Hz, and certainly below 2000 Hz, with the greatest peak energy in speech very close to 400 or 500 Hz. This suggests that frequency information in the mid-frequencies is of some importance. It is recognized that this is also the frequency region of considerable interfering noise, making amplification of this region an extremely difficult undertaking, especially when both noise and speech utilize the same frequency areas in their spectra.

A. Power vs. intelligibility 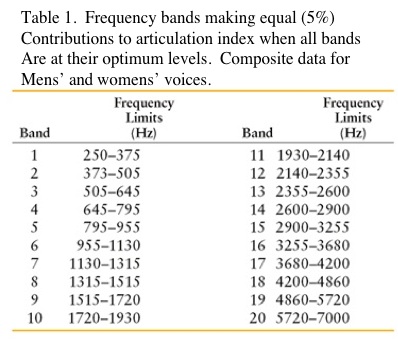 The loudest vowel [aw] as in “all,” to the softest consonant (voiceless “th”), as in the word “thin,” shows the vowel to have about 680 times greater sound pressure (ratio of 680:1), making it about 28 dB stronger (Figure 2). In the long-term average speech spectrum (Figure 1), 2000 Hz has less energy than 500 Hz by almost 35 dB. Initially, this would seem to imply that if normal conversation were to occur at 65 dB SPL, the high-frequency sounds above 2000 Hz would be softer by about 30 dB, or presented at 35 dB. The issue is complicated, however, when the intensity of a sound in free space follows an inverse-square law, which means that the intensity of a sound varies as the square of the distance. Following this law, when a listener moves to twice the distance from the sound source, the intensity will decease to one-quarter the original intensity. (If the distance is increased ten times, the intensity will be reduced to one one-hundredth the original intensity).

Fortunately, this is not what happens in a reverberant room (where most people listen), where different frequencies are emphasized (resonance) or de-emphasized, allowing high-frequency sounds to be heard more easily. Still, what is the real effect when a person has a high-frequency hearing loss? Can reverberation overcome the hearing loss as well as the overall decrease in high-frequency sound pressure, and if it can, what is the impact of increasing reverberation time on intelligibility? We know that it is not good.

Based on nonsense syllables

By definition, critical bands are frequency bands making equal (5%) contributions to intelligibility when all bands are at their optimum levels. Table 2 shows the critical bands developed by French and Steinberg for 20 bandwidths from 250 to 7000 Hz, and for a flat signal[5]. In these critical bands, the bands below 2000 Hz contribute a full 50% to intelligibility; and through 3000 Hz, a full 70%. It is suggested that if the bandwidths were not optimum, wider bands would be required for a given critical band. The question is, are all of the bandwidths at optimal levels in a hearing aid? In a narrow-band amplification system (what a hearing aid might be called), it might be suggested that the mid-frequencies are more likely to have optimum bandwidths, and thus contribute more to intelligibility. High frequencies are less likely to have optimum bandwidths, suggesting that a wider bandwidth is required to provide the 5% equal contribution that is shown in Table 2. However, wider bandwidths are not common in hearing aids, even today. Additionally, cochlear hearing impairment can have dramatic effects on the critical band by making it wider[6]. 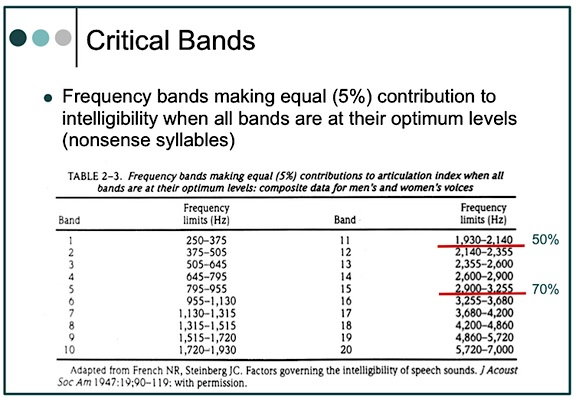 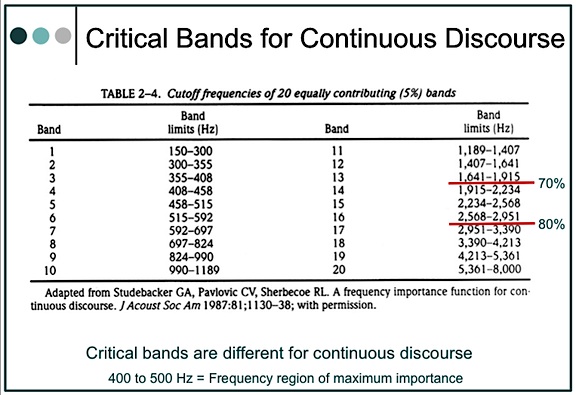 Based on continuous discourse

An assumption that critical bands are the same for all the speech materials has been shown not to be true[7]. Studebaker and his colleagues found that the frequency-importance function for continuous discourse (CD) was different than for nonsense syllables, and that lower frequencies were found to be relatively more important for the intelligibility of CD than for identification of nonsense syllable and other types of speech for which data are available, except for synthetic sentences.

These researchers also interpolated 20 bands of equal contribution (5%) for continuous discourse (Table 2). When compared with French and Steinberg’s critical bands, they show greater intelligibility contribution at lower cutoff frequencies (70% below 2000 Hz and 80% below 3000 Hz). When plotted for one-third octave-band-importance function (importance/dB), they found the frequency region of maximum importance at 400 to 500 Hz, with a suggestion of bimodality with relatively less importance in the 800 to 1250 Hz region.

What is the implication for hearing aid amplification? It seems to suggest that greater concentration of the mid-frequencies, especially if amplified cleanly, may improve intelligibility as much, or perhaps even more, than unchallenged concentration on the high frequencies.

The data suggest that vocal communication is highly resistant to distortion, and that redundancy may shift the frequency of crossover even lower. Although conversation is intelligible with only the upper half of the speech spectrum, it is not unique because it can all be discarded and intelligibility can be maintained equally with only the lower half of the speech spectrum.

Speech spectrograms have shown that F2 (the second formant or frequency energy region) of a phoneme is most important for intelligibility, both for normal and for sensorineural-impaired listeners with sloping audiometric configurations[9]. Formants are characteristic of vowels. Figure 4 illustrates a sound spectrogram of a phrase and identifies the phonemes. Note the definite energy (formant) regions of the vowel sounds, with the formants labeled from the bottom of the graph upward.

Table 3 shows the formant frequency ranges for various vowel sounds. Note that the range of F2 is from 880 to 2200 Hz. However, while F2 is considered very important, several authors recommend attenuating the first formant region to improve speech intelligibility of hearing impaired listeners[10][11]. 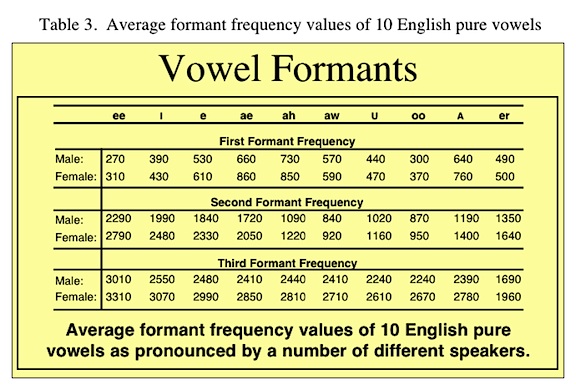