Originally posted at HHTM on February 4, 2014. Reprinted with permission.

Most audiologists know that the ability to hear relies upon small sensory cells or “hair cells” in the inner ear. Many types of commonly acquired hearing loss are the result of damage or death to these delicate hair cells, including noise-induced hearing loss, presbycusis (age-related hearing loss), and ototoxic hearing loss (hearing loss that occurs after a patient is exposed to certain life-saving but toxic medications). 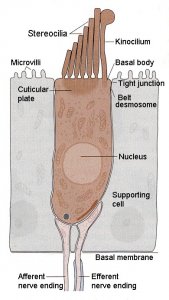 More than 90% of hearing loss occurs when either the hair cells or auditory nerve cells are destroyed. This starts affecting some individuals from birth and about one-third of the world’s population over age 65 and about half of those 75 or older.

Named for the microscopic hair-like extensions called “stereocilia” projecting from their tops in bundles, these “hair bundles” (right) convert sound vibrations into electrical impulses that travel to the brain via CN VIII, the auditory or hearing nerve.

Once damaged in mammals, these hair cells are gone forever, leaving humans hearing impaired. Until the last few years, scientists believed that hair cells in mammals could never be replaced if they were injured or destroyed.  In the late 1980s, researchers discovered that hair cells could be regenerated by the Japanese quail. This discovery led to hopes that hair cells could also be reproduced by humans when given the correct combination of ingredients.  Its now been over 25 years since the discovery that birds can regenerate hair cells (Corwin & Cotanche, 1988;Ryals & Rubel, 1988).  While the research looks promising, (the Hearing Pill, notwithstanding) there is still no approved disease modifying drugs for sensori-neural hearing loss. Through gene therapy and stem cell research, however, scientists have been able to grow new hair cells in laboratory animals, in some cases restoring some hearing to deafened mammals. 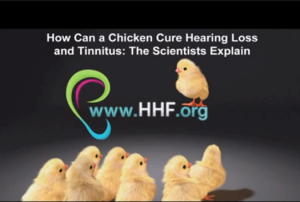 As with other important scientific discoveries such as penicillin, the discovery that chickens can regenerate their own hearing occurred almost by accident. While studying how drugs that cause hearing damage affect the tiny sensory cells in the ear, Hearing Health Foundation funded scientists needed to permanently damage a chicken’s hair cells. (Click on the Chicks for a video.) For 10 days, research assistants administered a common antibiotic known to cause hearing loss to laboratory chickens. On day 11 many of the hair cells were gone and a few days later, even more had disappeared. Surprisingly, when the scientists looked three weeks later, almost all the hair cells had returned.  They didn’t believe these results so they did the experiment again and again. Sure enough, chickens can naturally regenerate their inner ear hair cells, restoring their hearing after damage. Now we know this ability is true of all types of vertebrate animals except mammals, including us.

Experiments with mice are also proving to be enlightening. In these studies, researchers applied a drug to the cochlea of deaf mice. The drug had been selected for its ability to generate hair cells when added to stem cells isolated from the ear. It acted by inhibiting an enzyme called gamma-secretase that activates a number of cellular pathways. The drug applied to the cochlea inhibited a signal generated by a protein called Notch on the surface of cells that surround hair cells. These supporting cells turned into new hair cells upon treatment with the drug. Replacing hair cells improved hearing in the mice, and the improved hearing could be traced to the areas in which supporting cells had become new hair cells.

“The missing hair cells had been replaced by new hair where the hair cells were replaced,” said Dr. Albert Edge of Massachusetts Eye and Ear Infirmary and Harvard Medical School.

“We’re excited about these results because they are a step forward in the biology of regeneration and prove that mammalian hair cells have the capacity to regenerate,” Dr. Edge said. “With more research, we think that regeneration of hair cells opens the door to potential therapeutic applications in deafness.”

The key to restoring hearing in humans is to regenerate cells deep within the inner ear. In fact, most types of hearing loss in humans results from damage to these cells, called hair cells. While humans cannot regenerate hair cells in the inner ear after they are damaged, chickens can. In fact, most animals other than mammals can regenerate these delicate cells, restoring their hearing spontaneously after damage. Our goal is to translate this to humans.

We are now much closer to having to answer these questions than ever before!