Originally posted at HHTM On May 20, 2015. Reprinted with permission. 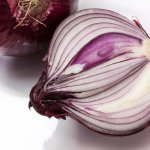 “Peeling the Onion” is a monthly column by Harvey Abrams, PhD.
For today’s post, I’d like to combine the subjects of two previous, seemingly unrelated “Peeling the Onion” posts – the Transtheoretical (Stages of Change) Model and MarkeTrak (MT) 9. MT9 Goes to the IOM Meeting

On June 30th I attended the Second Meeting of the Institute of Medicine’s Committee on Accessible and Affordable Hearing Health Care for Adults that was held at the National Academies of Sciences, Engineering and Medicine in Washington DC. Information about this committee and its responsibilities can be found in a previous post by David Kirkwood in HHTM as well as in a recent Hearing Review blog by Karl Strom.

I was asked to provide a brief presentation to the committee on MT9 from the consumer’s perspective.

The readers of HHTM should be generally familiar with MT9 at this point. David Kirkwood provided an excellent overview of MT9 in an earlier post and Jan Kilm and I prepared an article on MT9 for the Hearing Review. Amyn Amlani and I addressed some specific issues associated with the adoption rate in subsequent HHTM posts.

For the purposes of my presentation to the IOM, however, rather than present the committee with a slide deck filled with data, I thought I would attempt to tell the story of MT9 through the context of one patient’s journey. Let’s call him John.

John is 68 years old and recently retired. He is married with grown children and several grandchildren. He’s in good health, physically and socially active, and financially comfortable.

Like many individuals his age, John is beginning to experience increasing hearing and communication problems. Specifically, he’s having to ask his wife and friends to repeat what they’ve said; he’s having problems understanding his children and, particularly, his grandchildren on the phone; he needs to turn up the TV volume to a level that’s becoming uncomfortable for his wife.

If John is anything like the millions of other Americans with adult-onset hearing loss, he is about to embark on a journey that started even before he became aware of his problem and will end, ideally, when he’s satisfied that his communication problems are resolved.  Interestingly, the data from MT9 informs us, in very detailed ways, just how that journey is likely to be navigated by John and millions like him.

John’s journey can be conceptualized through the Transtheoretical Model of behavior change originally introduced to describe a therapeutic approach to smoking cessation and subsequently applied to the management of other therapeutic interventions to include, most recently, audiologic rehabilitation.[1],[2][3] The transtheoretical model recognizes that behavior change is difficult and that most individuals progress (and sometimes, regress) through a 6-stage cyclical process. You may recall that these stages of change are identified as:

We know that John didn’t wake up one day and decide to purchase hearing aids. Adult onset hearing loss tends to be invisible, painless, and progresses very slowly; so much so that, early in his journey, during the pre-contemplation stage, John may not have even been aware of his hearing difficulties, though others likely were.

It’s possible that John likely blamed others for his problems. As friends and family increasingly raise the issue of his hearing difficulties, John begins to accept the fact that he has a problem and begins to think about doing something about it. He internalizes the advantages and disadvantages of taking action in what’s known as the contemplation stage.

John’s Journey Isn’t a Walk in the Park 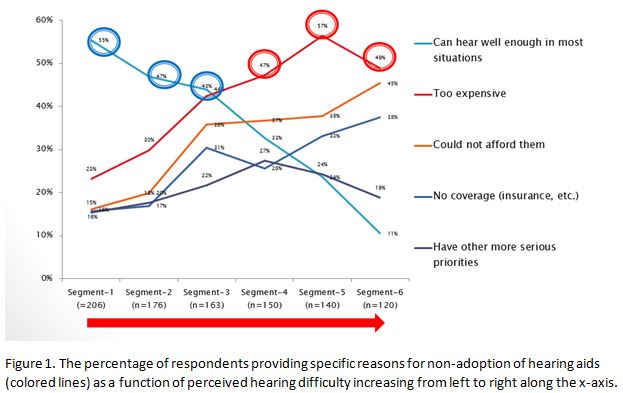 John’s internal cost vs. benefit calculus can be illustrated in another model called the Health Belief Model which I’ve also reviewed in a previous post. Before we take action related to a health-related concern, we internalize our susceptibility to the disorder, how serious it is, what the benefits will be if we take action and the barriers that are preventing us from doing so. We weigh those perceived threats against our expectations of the outcomes and decide whether or not to act. In John’s case, this action might be manifested in scheduling a hearing test.

The data from MT9 provides important insight into the perceived barriers to taking action which tend to be a function of the perceived severity of the hearing loss which is consistent with the Health Belief Model. Figure 1 illustrates the reasons respondents in the MT9 survey gave for not taking action. The segments along the bottom of this graph generally represent increasing amounts of perceived hearing difficulty.

Among those with mild to moderate hearing difficulty (segments 1-3), the primary barrier is their perception that they hear well enough in most situations, as represented by the teal line and circles; for those with more severe difficulty (segments 4-6), affordability appears to be the primary barrier as represented by the red line and circles. Expense (orange line) and lack of insurance coverage (blue line) as barriers, also seem to be correlated with the perceived degree of hearing difficulty. 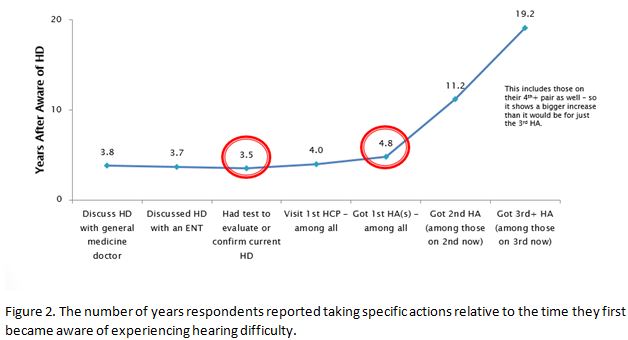 MT9 data suggests that, as a result of these barriers, it will take approximately 3.5 years between the time John was initially aware of his hearing difficulty and when he had his first hearing test and an additional year before he purchases his first hearing aid (Figure 2).
In the next post, I’ll discuss how the MT9 data informs us as to how John prepares to take action as he enters the preparation stage.