Originally posted at HHTM On October 20, 2015. Reprinted with permission.

In many state or provincial worker’s compensation boards there is a “correction factor” that may be applied to a calculated noise induced hearing loss. In many cases, this is a “presbycusic” correction and may amount to subtracting 0.5 dB off of the calculated average hearing loss for each year over the age of 60. On the surface, this appears to be an expeditious ”correction” factor; it is quick and easy to calculate and at least is in the ball park of a correction for age.

OSHA in the United States uses rather scary looking tables F-1 (for males) and F-2 (for females) that can be found in their optional appendix. This gives age corrections for ages starting as early as 23 (with a 1 dB correction given at both 4000 Hz and 6000 Hz). The corrections start to exceed 5 dB by age 32 with a slight correction also being given for 2000 Hz and 3000 Hz.  It is slightly less dramatic for women in table F-2 with corrections on the order of 5 dB beginning at age 35 or 36.  It is not known why there is a difference between men and women although there are many metabolic and hormonal theories being proposed.

At least for men, there is a 30 dB age correction at 6000 Hz and about a 28 dB one at 4000 Hz for those over the age of 60. There are no additional age corrections above age 60. For those who like numbers, part of table F-1 for men is given below. Unfortunately it’s still given below for those who don’t like numbers. (The actual table has entries for every age in 1 year units). 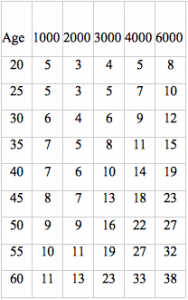 It is interesting to note that a slight hearing loss is “expected” for even 20 year olds. It is also important to recognize that OSHA is based on a 90 dBA fence and uses the 5 dB exchange rate which significantly underestimates the effect of noise (and music).  Most jurisdictions in the world use criteria that are similar to those used by NIOSH (85 dBA action point and a 3 dB exchange rate).

The “intent” of this table however was primarily to assist in determining there was actually a real hearing change (a change exceeding the Standard Threshold Shift) or whether it can be attributed to aging.

In the “subtract 0.5 dB for every year over the age of 60” scenario, this is something that may be a bit over-zealous. In this scenario, hearing loss due to noise exposure would be the average of several frequencies such as 500 Hz, 1000 Hz, 2000 Hz, and 3000 Hz, depending on the jurisdiction.  A 0.5 dB/year correction (subtracted from the above four frequency average) would amount to a 2 dB change for each frequency for each year over 60, or equivalently, an 8 dB change for each year at 3000 Hz only. This is rather dramatic, since changes at 3000 Hz typically amount to one decibel at most/year. This is partly related to the fact that most hearing loss occurs in the higher frequency region such as 4000 Hz and 6000, and its progression experiences a toughening or slowing down of hearing loss over time (see blog on asymptotic hearing loss).

Although the references are dated, like most areas of what we know about noise exposure, Bies and Hansen, 1990, and Bies, 1994, criticized the 0.5 dB correction as being too over- zealous. It is really just a “correction” that saves money for the various compensation boards rather than having any clinical reality.

Another assumption behind this correction is that the effects of noise exposure and music exposure are the same animal. Research in this area is very difficult to perform but a 2000 article in Hearing Research by Gates, Schmid, Kujawa, Nam, and D’Agostino suggests that even presbycusis and noise exposure are quite different in their progressions and underlying structures.  This doesn’t answer the question of music exposure versus noise exposure but does bring up the point that sensori-neural hearing loss may be quite different depending on the source, despite audiometrically appearing to be quite similar.
The Gates, Schmid, Kujawa, Nam, and D’Agostino article is so important (even though it is also 15 years old) that a future blog will be dedicated to this…. in fact, stay tuned for next week!