An Update on Meniere’s Disease

Michael Vekasi, AuD, R.Aud, Aud(C), FAAA and Erica Zaia are coordinating the “Striking the Right Balance,” column which will cover the latest information on “all things vestibular.”

In this edition of “Striking the Right Balance,” Dr. Neil Bailie, otologist and neurotologist at the Royal Victoria Hospital in Belfast, Northern Ireland provides an update on Meniere’s Disease.

In 1861, the French physician Prosper Meniere described a syndrome characterised by the presence of intermittent vertigo, tinnitus and hearing loss, correctly proposing that the site of the pathology was the inner ear.1 Subsequently, the condition was correlated histopathologically with the presence of endolymphatic hydrous2,3 although the etiology remains unclear and as yet there is no definitive diagnostic test. Where Meniere’s symptoms arise due to a recognised cause, such as syphilis or Cogan’s syndrome, the term Meniere’s syndrome is used, whilst the term Meniere’s disease (MD) is applied if there is no identifiable cause. At the present time, Meniere’s disease is a “committee diagnosis” – one whose diagnosis relies on fulfilling criteria agreed upon by a panel of experts. The most recent guidelines were published by the American Academy of Otolaryngology Committee on Hearing and Equilibrium in 1995,4 (Table 1). 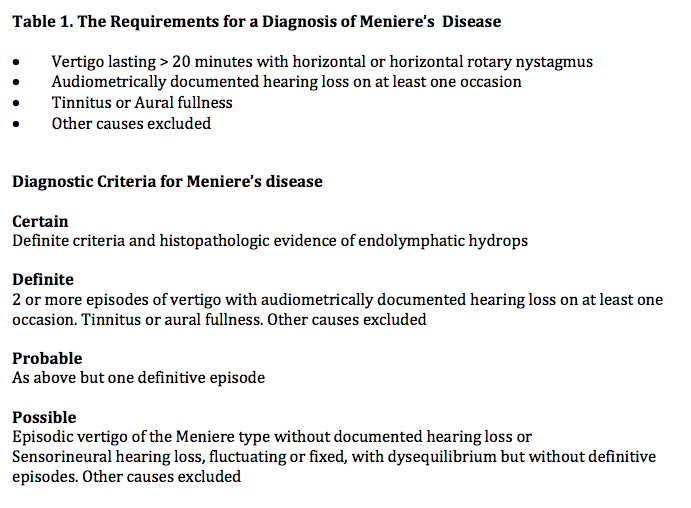 A multiplicity of treatment options exists for MD. However, the principles of treatment were succinctly described by Kerr5 and continue to provide a useful structure under which to consider the various treatments:

Meniere’s disease is capricious, with a high tendency to periods of natural remission, making it difficult to determine whether symptomatic improvements are due to treatment or simply part of the natural history of the condition. It is recognised that patients with vestibular disorders often have co-existent pathological anxiety, which can negatively impact on their symptoms. Thus it is also possible that patient confidence in a particular treatment may result in an improvement in their symptoms due to a reduction in anxiety, rather than any other particular property of the intervention. An ideal treatment should prevent vertigo and relieve tinnitus and hearing loss but remains elusive at the present time.

What follows is by no means a definitive or exhaustive treatise but rather highlights some recent developments in the understanding and treatment of MD.

Whilst it remains controversial, there is an increasing recognition of an overlap between MD and migraine. It is recognised that there is a higher incidence of migraine amongst those diagnosed with MD compared to the general population.6 Phillips et al., have argued that, aside from basilar migraine, migraine does not cause vertigo.7 However, there is an increasing belief to the contrary amongst otolaryngologists and neurologists and the Baranay Society has published guidance on the diagnosis of vestibular migraine.8 Recently, Foster and Breeze9 have proposed an intriguing model to explain the pathophysiology of a Meneire’s attack and the link between migraine and MD. It has been long recognised that whilst endolymphatic hydrops is the pathological correlate of MD, hydrops is also seen at post mortem in those who did not suffer MD. The authors propose that the emergence of MD symptoms requires both endolymphatic hydrops and a trigger – that of temporary impairment of blood flow to the affected inner ear. The model proposes that endolymphatic hydrops acts as a “Starling Resistor” – an external compressor on the capillary bed within the inner ear – increasing the resistance to blood flow within the inner ear. A decrease in the upstream arterial pressure may then result in cessation of flow through the inner ear, giving rise to an ischaemia-reperfusion injury within the inner ear. It is well recognised that during a migraine attack, there is a period of cerebral vasoconstriction and this new model suggests that this, in combination with pre-existent endolymphatic hydrops, may produce a Meniere’s attack. Other risk factors for cerebrovascular ischemia including smoking, hyperlipidemia, and diabetes could similarly trigger a Meniere’s attack. Irrespective of whether this new model stands up to future scrutiny, my own practice to date has been that where Meniere’s and migraine headache co-exist, to try to ensure optimal control of migraine headaches and any other vascular risk factors such as smoking. In my experience to date, successful control of migraine headaches has frequently coincided with a profitable improvement in vertiginous episodes.

The use of intra-tympanic steroid therapy in the treatment of MD was first described by Sakata10 and has gained increasing popularity in recent years. A variety of mechanisms have been proposed for their mechanism of action, including reduction of inflammation in the inner ear and alterations of fluid homeostasis. Proposed regimes vary from a single injection to multiple injections given up to daily for 5 days. Whilst there have been relatively few good quality studies to date, systematic reviews have suggested good control of vertigo, for perhaps up to 1 year, but without appreciable effect on the long term hearing symptoms.11,12. Questions remain about the optimum dosing regime. There are relatively few side effects from an intratympanic steroid injection and I generally offer this amongst first line options to patients having flare ups of vertigo despite standard treatments. My own experience to date has been that the response, whilst on the whole favourable, is variable and relatively short-lived, often with recurrence of symptoms within a year or less.

Where all else has failed, elimination of fluctuating vestibular function can offer the patient the opportunity to reduce their vestibular symptoms through central compensation. Surgical labyrinthectomy on the affected side can cure patients of fluctuating vertigo from MD but will also “cure” them of any remaining hearing function in the operated ear. Thus, this is not an ideal treatment option where serviceable hearing still exists. Vestibular nerve section, on the other hand, offers the possibility to selectively defunction the peripheral vestibular apparatus on the affected side whilst (usually) preserving the hearing. However, the procedure has the disadvantages of a major neurosurgical approach, with a small risk of serious of complications such as stroke or death. The recognition that aminoglycoside antibiotics are ototoxic led to the development of the less invasive technique of chemical labyrinthectomy.13 At present, gentamicin is favoured due to the fact that it relatively more toxic to vestibular rather than the cochlear neuroepithelium. Many of the early regimes involved a “scorched earth” policy of repeated administration of gentamicin until all of the vestibular function was ablated. Whilst such higher dose techniques have been effective in controlling vertigo, they are associated with a risk of coincident hearing loss in approximately 25 % of cases.14–16 It is well recognised that MD has a propensity to affect the contralateral ear and this risk increases the longer a patient has suffered the condition. The exact incidence of bilateral disease remains unclear but a large population study15 suggested bilateral disease in about 10 % in the first few years, rising to 40% at 20 years. There has been concern that complete ablation of peripheral vestibular function in one ear may result in more significant disability, should the contralateral ear subsequently become involved in MD. This, combined with the risk of worsening of the hearing loss with higher dose regimes, his has led to the development of a more conservative approach. It has been recognised that low-dose gentamicin regimes can produce similar cure rates for episodic vertigo as more aggressive intervention whilst reducing the risk of hearing loss.17 It is felt that this technique may also reduce but not completely ablate vestibular function on the affected side, which may be beneficial if subsequent contralateral disease arises. The author has found that in the majority of cases, one or two intratympanic injections of gentamicin are sufficient to bring about a lasting resolution of episodic vertigo.

Endolymphatic sac decompression has probably polarized the otolaryngology community more so than any other aspect of MD treatment. Following the publication of the Danish Sham study,18 the procedure was largely abandoned in Europe. However, the study had methodological flaws leading many to question the validity of the results. The procedure remains popular in the United States at the present time. To do justice to this particular argument is well beyond the scope of this article. However, being Irish, I shall invoke an anecdote on the subject involving the consumption of alcohol. After a night with this author and another otolaryngologist of Polish extraction, one of the authors of the Danish Sham study conceded that the procedure might actually be effective in controlling vertigo symptoms. However, he felt that the improvement, rather than being mediated via decompression of the endolymphatic sac, was due to the surgery inflicting a degree of insult to the vestibular system, similar to the effect of low-dose gentamicin. I suspect that heated discussion on the subject of sac decompression will continue for some years to come.

MD continues to vex and challenge physicians and, despite a plethora of publications on the subject, an effective evidence-based treatment or treatment pathway has not been defined. With increasing access to the Internet across the globe, perhaps the time in now ripe to set up worldwide studies involving sufficiently large numbers of patients to answer once and for all which of the current treatments are effective and which are not.