In-Ear Monitors Need To Be Aimed at the Eardrum… True or False?

I went to the vet for my regular check-up… actually it was for my two new kittens, Broccoli and Feather, and not me. I still get the cats mixed up; they are both 4-months old, are long haired female tabbies from the same litter, and to my untrained eye, look identical. While sitting in the vet’s office, and while trying not to watch as the vet gave the last of a series of rabies shots, I noticed a great poster on the wall of the peripheral hearing anatomy of the cat. Like ours, it started from the outer ear meatus and went medially towards the middle ear (complete with the three ossicles), but unlike ours, the ear canal dipped precipitously downwards and then proceeded on. 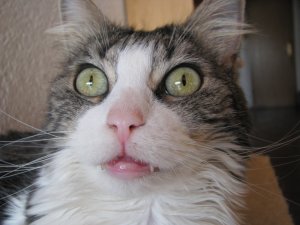 I was thinking that it would be quite difficult to make an in-ear monitor for my cats (in case they wanted to listen to their favourite cat songs such as Soft Kitty). When making ear mold impressions for in-ear monitors we want to accomplish three things: (1) as long of a bore as possible to minimize the occlusion effect, (2) have the most medial part aiming at the eardrum to ensure that higher frequency sound energy is optimally transduced, and (3) having the mouth open so that the front-back diameter for the in-ear monitor would be large enough to ensure a good seal, even while purring in order to get a good bass response. I am not sure that I could even get a cat to keep their mouth open long enough for an ear mold impression, but assuming that I could, I would want to get a good seal where the ultimate orientation of the in-ear monitor receiver(s) would point towards the eardrum.

After the vet appointment, I dropped off the cats at home and consulted with the world’s leading cat audiologist Snickers McFeline. Dr. McFeline told me that I was completely wet behind the ears and must be off my feed. An optimal in-ear monitor for a cat, and even for a human does not need to be aiming at the eardrum. This is the result of incorrect human (and cat) logic.

Here is where I went wrong… 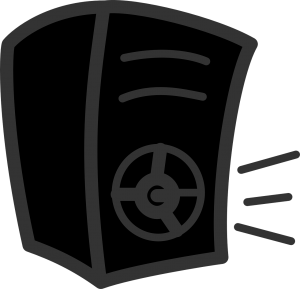 We know from a loudspeaker orientation in a room that low frequency sounds emanate from the loudspeaker in any direction and to say the least, are non-directional. This is why the bass woofer loudspeaker can be placed anywhere in a room; under a couch, facing the wall, or facing upwards. This is also why we call a home stereo system with 6 loudspeakers (5 normal ones and a large sub-woofer) a 5.1 system rather than a 6.0 system. There are 6 loudspeakers but the sub-woofer low frequency loudspeaker is non-directional and to say that sound comes from 6 directions (from 6 loudspeakers) would be false. The honest audio engineering field (they must be cat lovers) correctly identified this system as a 5 direction, and one other sub-woofer, or 5.1 system and not a 6.0 system, even though everyone knows that 6.0 is better than 5.1.

For higher frequency sounds, we do know that they are progressively more directional as the frequency increases. For higher frequency sounds (from a tweeter loudspeaker) sounds tend to emanate almost like a laser beam. Move slightly to the right or to the left of the main axis, and the high frequency sound has a lower sound level. Indeed at least one manufacturer has (www.Hypersound.com) has used this fact to allow one person among several in a room to be able to listen to a TV without anything more than their ears. This is also why trumpet players in an orchestra should be placed on risers – the high frequency (and higher sound level) components of their trumpet will go over the heads of those other musicians downwind and thereby reduce their potential music exposure. (Brass players also like to be on risers so that everyone can see them!)

While it is true that the front-back diameter does increase when the mouth is open, the comment about needing to aim the sound at the eardrum, is false.

It is true that higher frequency sounds are quite directional from loudspeakers in a room, this does not follow for an occluded small volume space such as the ear canal. Just open any introductory textbook on acoustics and the reasons are all there in black and white print. The acoustics of small occluded spaces is too complex to go in to here.

It is an error to assume that the in-ear monitor (or indeed any in-ear earphone that may be used for listening to music or speech) needs to be aimed at the ear drum. There are many over the ear earphones (that can be used as monitors as well) that provide a wonderfully flat and broad band response without having to aim at the eardrum.