Reprinted with permission from The Hearing Review.

Repeated claims in recent years that ER-15 Musicians Earplugs™ (Carlson, 1987) and ER-20® HiFi earplugs do not perform as advertised have been based on experiments published by Chesky et al. (2009) and Chesky & Amlani (2014). They suggest that REAT (Real Ear Attenuation at Threshold) measurements made in accordance with ANSI standard S12.6-1984 are invalid because they are made at threshold, and also that typical manikin measurements are invalid unless music tokens are used. The purpose of this paper is to report that their manikin data, using their own recorded musical tokens, show a nearly flat response for the ER-15 within a few dB from 100 Hz to 16 kHz when plotted correctly on a standard logarithmic (musical) frequency scale. In the correct format, their data agree with 25 years of measurements by independent laboratories in the U.S. and abroad, using REAT (Real Ear Attenuation at Threshold) and manikin measurements.

Chesky and Amlani (2014) show a series of careful KEMAR® manikin measurements, using several different musical tokens as the sound source. Eight loudspeakers were located one meter from the manikin, and spaced every 45 degrees around a circle. The attenuation for the ER-15 earplug in a custom earmold made for the KEMAR manikin was obtained by comparing the plugged- and open-ear response on KEMAR.

The published ER-15 graph of Chesky and Amlani (2014) shown in Figure 1A, was recreated after a careful extraction of the data from their Figure 6. (Appendix 1 describes the extraction method.) Their graph used a linear frequency scale starting with a frequency of 47.07 Hz. The next frequency on their graph is at 1765.72 Hz, slightly more than five octaves higher, and so on until at the opposite end of the spectrum the last two labeled frequencies, 17269.61 and 18992.27 Hz are about 1.5 musical half tones apart. The strong dip that visually appears to be at the middle of the piano is at 8.5 kHz, an octave above the top of the piano keyboard

Figure 1B shows the same ER-15 data re-plotted on the logarithmic frequency scale normally used for reporting earplug attenuation data. Chesky and Amlani’s ER-15 data show a nearly flat response within a few dB from 100 HZ to 16 kHz, with the exception of an anomaly (dip) around 8 kHz. Such a dip does not appear in a true diffuse-field measurement, suggesting that each of the eight loudspeakers played identical (in-phase) musical tokens.

Chesky and Amlani (2014) state that: "...the claims used to market [Musicians Earplugs] to musicians and music schools are misleading and that the discrepancies for claiming attenuation characteristics in response to musical stimuli are related, in part, to the use of the REAT testing procedure." The explanation appears instead to be related to the visual appearance of graphs plotted on a linear frequency scale. In fact, their KEMAR measurements generally agree within a few dB of the ER-15 REAT measurements reported 26 years ago by Berger (1989). See Figure 2 below.

Figure 2A shows open-ear and plugged-ear data for a nominal ER-15 Musicians Earplug in a correctly-made custom earmold. Figure 2A shows the good match in spectrum shape between open ear and plugged ear obtained with an ER-15 earplug. Figure 2B shows the attenuation derived from the responses Figure 2A, as well as the attenuation based on REAT "Real People" measurements reported by Berger (1989) on 16 subjects tested 3 times. Both of the attenuations shown in Figure 2B resulted from diffuse-field measurements; objective in the case of KEMAR data and subjective (threshold-difference) in the case of Berger's E-A-RCAL data. Both used noise instead of music for the measurements.

The close agreement between the two curves in Figure 2B suggests that either one of those curves could reasonably represent the performance of the earplug under test. The use of pink or third-octave noise is irrelevant: Any sound source that has sufficient bandwidth and enough energy in each measurement band (to stay above system noise) will give identical attenuation results. The first author has performed many fidelity-rating tests (Killion, 1979; Killion 2004) using pink noise, orchestral passages, jazz trio segments, and a string quartet from the Chicago Symphony Orchestra. All of these, including pink noise, gave the same frequency response.

Criticism of the Fidelity of ER-20 Earplugs

ER-20 HiFi earplugs, which are approximately one-tenth the cost of Musicians Earplugs and widely used by high school bands and drumlines, have also come under criticism from Chesky et al. (2009), who concluded that "This study disputes often cited claims that flat-attenuating earplugs are widely accepted by musicians (Chasin, 2001; Niquette, 2007)." Yet in that same study, of the more than 300 students given ER-20 earplugs (of the 600 ER-20 earplugs supplied by Etymotic Research at no cost for the experiment), 85% of students report using the earplugs since receiving them, and the use rate was 91% for music majors compared to 78% for non-music majors. The report states that "The music majors also reported being significantly more likely to use the earplugs in the future compared to non-music majors." Most significantly, "Students reported that ...the university should provide earplugs to all music students (93.4%)."

To be fair, brass players reported some difficulty playing with earplugs, perhaps because the average playing time before that survey was taken was only slightly more than 5 hours. Additional possible explanations were discussed by Killion (2012).

The Chesky and Amlani data do not agree with the other three data sets even though they were obtained on KEMAR. In contrast to the ER-15 Musicians Earplugs, which depend on the earmold laboratory to make an earmold that seals, the ER-20 triple-flange eartip depends on a trained experimenter to obtain a good seal on KEMAR. One problem that is not obvious is the risk of "folding" of the three flanges, which can produce a large leak in the solid-steel "ear canal" on the KEMAR manikin. The attenuation shown in the Chesky and Amlani data is remiscent of that problem. Colleagues at other testing laboratories have reported that extreme care is required to obtain valid KEMAR data that are comparable to the normal real-ear performance of that earplug.

A comparison among the attenuation measurements of ER-15 Musicians Earplugs at several labs shows excellent agreement between objective measurements on the KEMAR® manikin and subjective Real Ear Attenuation at Threshold (REAT) measurements on human subjects, both of which show a nearly flat attenuation response from 100 Hz to 16 kHz. The discrepancies in Chesky and Amlani’s data appear unrelated to REAT measures, but instead to the scale used to plot the data. When re-plotted to standard scales, Chesky and Amlani’s data show a flat-attenuation response, in agreement with all other published data within a few dB from 100 Hz to 16 kHz, except for an anomaly around 8 kHz.

The data extraction method underlying the graphs in Figure 1 is illustrated in Figure A1. Interpolation of data between the lines was confirmed or corrected as required by overlaying the resulting Excel spreadsheet (linear) graph over the original graph until the two graphs agreed within one dB at all frequencies. 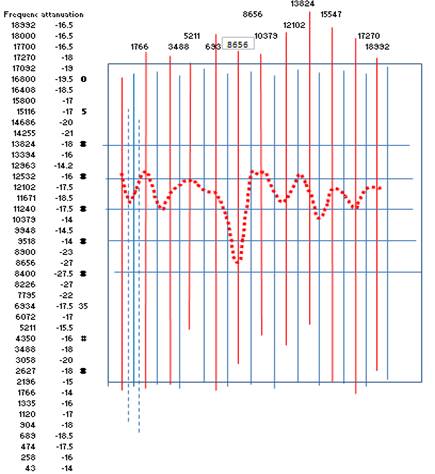 Appendix II A Third Check of REAT and KEMAR Measurements.

Since the 1940s, Elmer Carlson, taught how to use the electrical analog of a microphone, receiver, coupling tube, or earplug (Zuercher et al., 1988). Carlson, the inventer of the Musicians Earplug (Carlson, 1987) designed it -- of course -- with the aid of an analog. That analog, reproduced from Killion's (1992) tribute to Carlson, is shown in Figure A2, below. 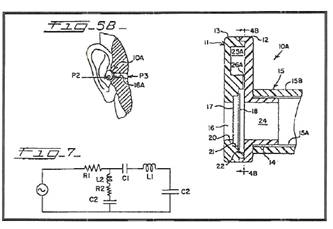 A properly constructed analog will agree within 1-2 dB of the actual device in each case. Having analogs for all products helps prevent errors in design, production, and measurement. The analog-derived attenuation of ER-15 and ER-20 earplugs agree with the data in the solid and dotted curves in Figure 5.