Do Infants with Hearing Loss Listen Like Little Adults?

Rapid developments occur in speech perception over the first year of life. Within hours of birth, normal hearing (NH) infants differentiate their mother’s voice from a stranger’s,1 rhythmic pattern of their native language versus non-native language2, and discriminate speech sounds from around the world.3-5 A decline in NH infants’ abilities to discriminate non-native speech sounds is observed around 6–12 months of age, followed by improved speech discrimination of their native language.4 This rapid perceptual change indicates that early auditory experience is important for the development of speech perception and word recognition. In contrast to our knowledge about infants with NH, little is known about auditory development in infants with hearing loss (HL) and how hearing aid (HA) processed speech may impact development.

Differences in how NH infants discriminate speech may be explained by their use of temporal envelope (TE; slow amplitude variations) and temporal fine structure (TFS; fast amplitude variations) information.6 We know that vowel discrimination for infants with NH require better spectral resolution than older children and adults.7 For adults with NH and HL, successful speech discrimination in quiet is possible with only TE. The addition of TFS improves speech understanding in noise, although the amount of benefit differs between those with NH and those with HL.8,9 However, little is known about how infants with HL use TE and TFS. Furthermore, consideration should be given to how HA signal processing using nonlinear algorithms (e.g., wide dynamic range compression, frequency lowering, noise reduction) affects these abilities, as nonlinear processing result in modifications either to the TE, the TFS, or both.

To examine the impact of HA signal processing on infant speech discrimination we quantified the amount of TE modification using a well-established metric, Cepstral Correlation (CepCorr10). CepCorr has been used to examine the cumulative effects of signal modification using commercial HAs, and as such does not consider each algorithm individually. Instead, CepCorr considers the overall HA output in the context of hearing thresholds. Thus, it provides an objective method for characterizing how much the TE changes relative to linear amplification because linear amplification does not modify the TE of a signal. This method provides a means to extend measures of HA processing beyond audibility. 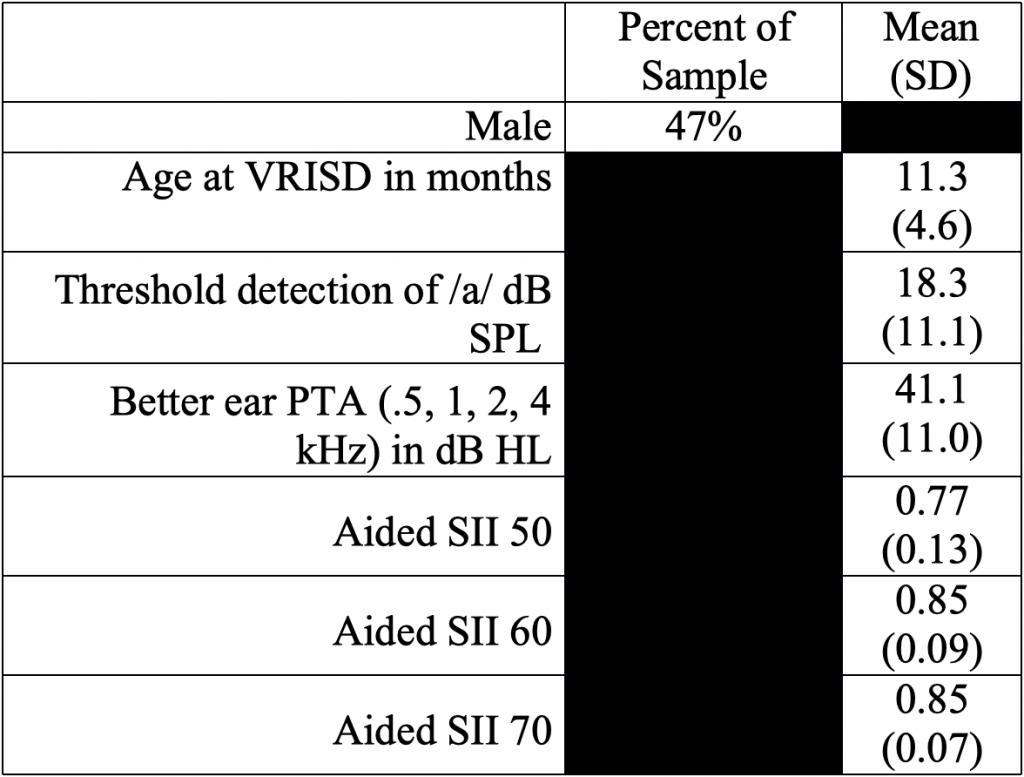 Personal HAs and Acoustic Recordings

HAs from three manufacturers (18 models) were programmed with fitting data from the child’s better hearing ear to create the acoustic recordings. Full details regarding recording setup are available, see.12-14

Stimuli used for the HA recordings and acoustic analysis were two HINT15 sentences in quiet (one male and one female talker) at three presentation levels (PL): 55, 65, and 75 dB SPL.

Two contrasts (/a-i/ and /ba-da) were used in the behavioral assessment. These contrasts represent different levels of discrimination difficulty, with the vowel contrast (/a-i/) being easiest and the consonant contrast (/ba-da/) being most difficult.16-18

Testing is described in Uhler et al.,19, and is reviewed here. We employed visual reinforcement infant speech discrimination (VRISD), a conditioned head-turn oddball paradigm similar to that used for VRA. VRISD assesses an infants’ detection of a change in speech stimuli. The performance was reported in p(C)max, an unbiased value, derived from d-prime,20 taking into account correct responses and rejections, false positives, and misses. Criteria were met (i.e., discrimination was deemed successful) when an infant achieved a p(C)max ≥0.73. If the child achieved criterion for the contrast at 50 dBA, then testing for the first contrast was complete and testing for the second contrast was initiated.18,21 However, if the child did not reach criterion at 50 dBA, the level was increased to 70 dBA, and then the level was reduced to 60 dBA, regardless of performance at 70 dBA.

We sought to identify how a measure of TE modification relates to speech discrimination performance in infants while utilizing their personal HAs. The VRISD score used for the analysis was the p(C) max score for the lowest intensity level where the infant reached criteria. For infants who did not reach criteria, we used their best p(C) max score regardless of PL. LME regression models with a random intercept for each participant were fit to accommodate the repeated measurements within an infant to examine the relationship of p(C)max with PL and TE modification. The /ba-da/ contrast had a VRISD score at 50 dBA that was approximately 0.08 lower than /a-i/ (95% CI -0.02, -0.07; p=<0.001), as measured by p(C)max. This finding indicates that overall performance on /ba-da/ was poorer than for /a-i/. Sixty percent of infants met criteria for /ba-da/ discrimination at either 50, 60, or 70 dBA, while 83% of infants met criteria for /a-i/ discrimination. The addition of TE modification in quiet at 55 dBA was not significant (β=-0.16; 95% CI -0.65, 0.32; p=0.516) and the estimate of the /ba-da/ contrast was unchanged, indicating that TE modification was not significantly related to performance, not explaining any of the variability in speech discrimination. These results were similar for all combinations of TE modifications and VRISD performance measured. Results are visualized in Figure 1, where there are tight bands for TE modification that span the entire range of behavioral performance, illustrating the limited ability to predict performance from TE modification.

Figure 1. Behavioral performance (p(C) max 50) for the a-i and ba-da stimuli (see legend) as a function of TE. Each panel represents PL (in level from left to right).

In this study, and previous work, we have shown that reliable TE modification measures can be captured from commercial HAs.14 These measures in the present study indicate that for children fit using best practices, including assuring audibility, there is little variation in the range of TE modification across individual HA fittings (see Figure 1). On one hand, this is ideal, as it indicates that clinical providers are following published guidelines. However, given the limited variability in TE modification, it is of limited use for predicting the wide variability in speech discrimination performance in this study population. These results paired with previous findings support exploring how infants with HL utilize both TE and TFS for speech discrimination.

Funding for this research was provided by the National Institutes of Health – National Institute on Deafness and other Communication Disorders 1K23DC01358; and by CCTSI=NIH/NCRR Colorado CTSI Grant Number UL1 TR001082 to author KU. We are grateful to the parents, participants, and audiologists who participated in this work.