Some Considerations for Audiologists as the OTC Hearing Aid Era Dawns in the U.S. 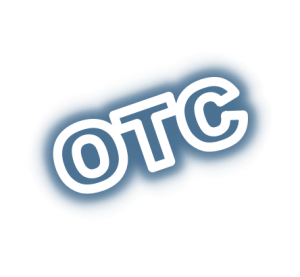 Two significant developments about the Food and Drug Administration's (FDA’s) regulation of hearing aids in the United States (U.S.) have occurred in the past five years. First, in 2016, the FDA removed the "physician waiver" system as a pre-requisite for the acquisition of hearing aids in the U.S. Second, in 2018, the Federal Over The Counter Hearing Aid Act was signed into law.1 Both of these changes followed from the "Affordability and Accessibility of Hearing Healthcare" movement which, in turn, led to important documents generated by the President's Council of Advisors on Science and Technology, and the National Academy of Science, Engineering and Medicine.2–4

As the movement's name implies, the focus has been on increasing both the affordability and accessibility of hearing healthcare for adults. Why this focus? For the past quarter-century, there have been repeated demonstrations that most Americans with mild-to-moderate hearing loss, primarily older adults, were not seeking help from hearing aids. Evidence that only about 20% of those who could benefit from hearing aids were getting them came from hearing-aid industry reports and large-scale population studies.5–7 This issue does not appear to be a uniquely American issue in that there is evidence for low uptake of hearing aids in Europe.8,9

Although the Over The Counter Hearing Aid Act required the FDA to develop guidelines for these products and their provision by late 2019, as of this writing, such guidelines have not as yet been distributed, even in draft form, for public review and comment. This undoubtedly will happen soon, however, and it is best to be prepared as a profession for the arrival of OTC hearing aids.

With the advent of OTC hearing aids looming, it is appropriate to consider the audiologist's role in the provision of these devices to those with mild-to-moderate hearing loss. One might argue that a necessary first step for the provision of hearing aids would be the documentation of hearing loss audiometrically, including the demonstration that it is, in fact, mild-to-moderate in severity. However, the Over The Counter Hearing Aid Act is careful to note that candidacy shall be based on perceived mild-to-moderate hearing loss, not audiometrically established mild-to-moderate hearing loss. The act also notes that "tests for self-assessment of hearing loss" may be used to establish candidacy. Such tests, presumably, could either be surveys, such as the Hearing Handicap Inventory for the Elderly,10 or behavioral measures along the lines of the digit-triplet tests administered over the phone or via the Internet,11,12 though, a professional assessment is not required to establish candidacy. Rather, the consumer with hearing concerns is empowered to act on these concerns directly.

So, what then will be the role of audiologists and how will the availability of OTC hearing aids impact audiology practices in the U.S. and elsewhere.? (I think it would be naïve to think that this movement to OTC hearing aids will be confined to the U.S., even if it remains the only country to enact such legislation.) Based on the findings of two randomized clinical trials (RCTs) conducted at Indiana University (IU),13,14 one viable option would be for audiologists to embrace OTC hearing aids, perhaps even making them available through their practices. Audiologists could provide a menu of options: self-select the devices entirely in our OTC room at lowest cost; self-select, but purchase assistance for X sessions with the audiologist at intermediate total cost; or work with the audiologist throughout following audiology best practices to select and fit the devices, as well as provide follow up, at the maximum cost. This assumes that the devices themselves will be very similar if not identical for each option and the consumer is purchasing varying amounts of support for the selection, fitting and maintenance of the devices from the seller.

Second, although audiology best practices proved superior in terms of likelihood to keep the trial hearing aids and yielded significantly better outcomes for those initially fit by the consumer, there were very few significant differences between best practices and consumer-decides regarding the measured benefit, satisfaction, and usage. That is, the older adult consumers in these RCTs did a good job self-fitting their devices and had many positive outcomes at the end of the 6-week trial. In most cases, the outcomes were indistinguishable from those in the best-practices arm of the first clinical trial. Further, recall that it is estimated that about 20% of those who could benefit from hearing aids acquire them via the prevailing best-practices approach. It is the remaining 80% with assumed unmet needs who have been the target of the accessibility and affordability movement of recent years. The two IU RCTs enrolled people who were not wearing hearing aids despite having enough hearing loss to benefit from the devices and having that loss for several years. In all ways, age, mild-to-moderate hearing loss, non-owners of hearing aids, the RCT participants were representative of the targeted 80%. As noted, for the consumer-decides approach, about 50% indicated at the end of the trial that they would likely keep their self-fit hearing aids. Assuming 50%, this would cut the 80% with unmet hearing needs to 40%. That is, of the 80% with unmet needs and not currently availing themselves of the existing audiology best practices for hearing-aid acquisition, half of them would now be fit if they could do it themselves using the consumer-decides approach. This would effectively triple the number of older adults with mild-to-moderate hearing loss receiving help from hearing aids from 20–60%!

What about the 50% of the consumer-decides group who indicated at the end of the 6-week trial that they were not likely to keep their hearing aids. Here, our prior RCTs can also offer some insight and the impact of this decision and a possible role for audiologists. First, over 90% of those who were not fit with audiology best practices in the first trial period opted for a second 4-week follow-up trial during which they were fitted using best practices. Thus, the prior "negative" experience, especially for those fitted with placebo devices lacking measurable gain, did not dissuade them from continuing to pursue hearing aids with the audiologist's help. As noted, moreover, for those who did pursue the extra 4-week trial with best practices, significantly improved outcomes were obtained. Across the two RCTs, there were a total of 64 individuals who wore placebo devices; the same hearing aids as all others but programmed to provide 0 dB real-ear gain. This likely would be a worst-case scenario for future OTC hearing aid self-selection. Although only 33% of the 64 placebos indicated that they were likely to keep their hearing aids after the initial 6-week trial, when the hearing aids were refit using best practices, 92% kept their hearing aids after the 4-week follow-up trial. Thus, even a very poor fit for the first trial period ultimately led to successful outcomes following a second trial with audiology best practices. Thus, if the audiology practice incorporates OTC hearing aids and the consumer is unhappy with their self-selection, they will likely return to the place from which they purchased the devices and, if they do, there is evidence that they will likely obtain better outcomes when refitting with the audiologist's help. A caveat to note: the participants in the RCT did not have to pay for the extra 4-week trial after the initial 6-week trial. The only cost to them was the extra time required to try the hearing aids and to make a final decision. Still, it is good to know that the vast majority, over 90%, were willing to continue for the 4-week follow-up and that when doing so, excellent outcomes were obtained.

The second IU RCT was a smaller study of 40 older adults who self-selected and fit their hearing aids using the consumer-decides approach.13 This RCT sought to gain additional information about this selection method. Near the end of the trial, for example, several questions were asked about the ease or difficulty experienced fitting the tubing, domes, and hearing aids, as well as their confidence in doing so. It turned out that the confidence they had in the hearing aid fit was the only significant difference between the 20 older adults who were likely to keep their self-fit hearing aids and the remaining 20 who responded that they were either not planning to keep them (N=18) or were undecided (N=2). Figure 1 illustrates this significant difference (Mann-Whitney U, p<0.05) in the distributions of responses between the two groups regarding their confidence in the hearing aid fit. Those who were likely to keep their self-fit hearing aids after the trial ("Yes" group in Figure 1) had more confidence in the self-fitting of their hearing aids. There were no other significant differences in ease or difficulty of fitting the tubing, domes, or hearing aids nor in the confidence in doing so for the tubing and the domes. These data provide another insight into how audiologists might be of help to those pursuing OTC hearing aids within their practice. For example, perhaps some selecting their hearing aids in the audiologist's practice would like to pay an additional fee to have the audiologist check their fit at the end of the process, reassure them regarding their choice, or suggest alternatives to try before leaving with the devices. 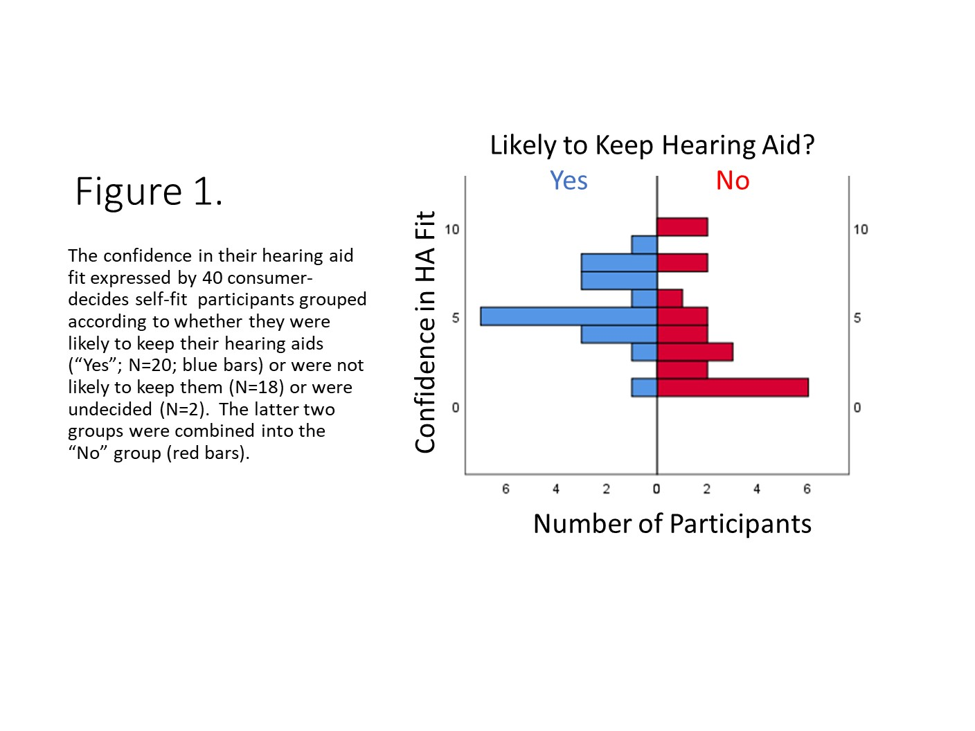 Throughout the history of hearing aids, changes in technology and practices seem to be one of the few constants. Almost 75 years ago, Raymond Carhart wrote: “The field of hearing aids is in rapid flux. Substantial changes in instrument design and performance are occurring. Our understanding of patient requirements and of the important criteria for instrument selection are becoming-more definite. We may expect the confusion which has clouded the field to dissipate steadily.” A new era of the OTC hearing aid is dawning and the field will be clouded with confusion once again. Ultimately, the goal of these new devices is to reach the underserved 80% of older adults with mild-to-moderate hearing loss. Hopefully, epidemiological studies and industry studies a decade from now will find that considerably more than 20% of adults with mild-to-moderate hearing loss have acquired hearing aids and use them to meet their listening needs. Time will tell. In the interim, audiologists should embrace every opportunity to serve those with impaired hearing, even those that may require creative reimagination of possible ways to do so, including those opting for OTC devices.