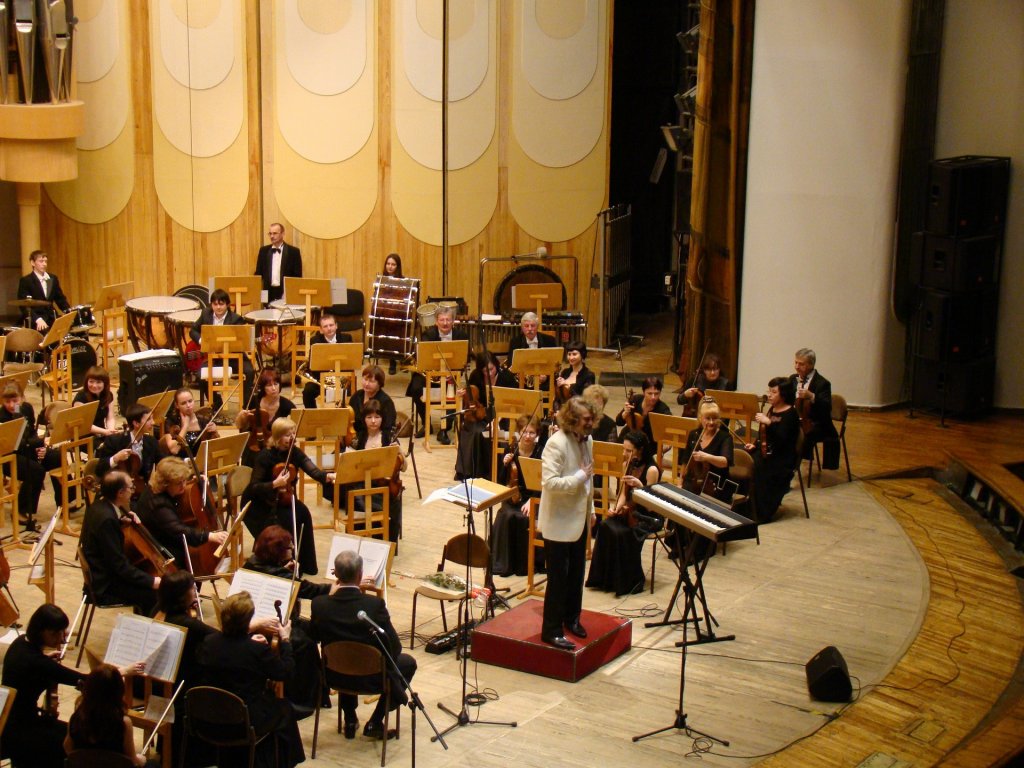 Many studies have been conducted to measure noise exposure of classical orchestra players.1–3 Each study found many points toward a potential risk of hearing loss and the need of some form of noise control to reduce the noise exposure of musicians. Other than the use of hearing protectors, use of acoustic shields is often recommended.

Acoustic shields are devices used for controlling sound energy reaching musicians seated in front of loud instruments (mainly brass). They consist of plastic plates, mounted on a pole and located at the head level of the musician intended to be protected. So, basically, they are set between the instrument behind the shield and the musician in front of the same.

There have been many studies where the attenuation of shields was measured in well-controlled laboratory environments, but the present study was designed to assess the attenuation in a real-life situation, with musicians seated in the orchestra pit in the Four Seasons Centre for the Performing Arts, in Toronto, Ontario.

The site is a 2,071 seat theatre with an orchestra pit beneath the stage. The pit measures 15.5 meters in width, 6.4 meters in depth (it protrudes 3.3 meters over the pit, while 3 meters is unobstructed from above), and the stage is 2.4 meters above the floor of the pit.

Measurements were performed during 10 performances of the ballet Le Petit Prince with music by Kevin Lau. Each set of measurements used 2 dosimeters: one located on the rear side of the shield, and the other attached to the shoulder of the musician intended to be protected (seated in front of the shield). The attenuation was obtained as the difference between these 2 measurements.

Sixteen musicians from the National Ballet of Canada Orchestra participated in the study. They were seated in areas of highest sound levels as per the arrangement of a previous study by Quian et al.4 Sound levels were recorded by Bruel & Kjaer personal noise dosimeters types 4445 and 4448. Each measurement consisted of a pair of readings from the 2 dosimeters.

Two types of acoustic shields are used by the orchestra: Wenger shields and Manhasset shields, model 2000.

The Wenger shields are made of clear polycarbonate and are 57 cm × 43 cm. The Manhasset shields have larger dimensions: 65 cm × 55 cm, and are made of Lexan polycarbonate. The thickness of both types of shields is 6 mm. Since the density of the material is 1,200 kg/m3, the surface density is 7.2 kg/m2; much lower than the 25 kg/m2 required for a highway noise barrier. The theoretical transmission loss, according to the mass low is around 22 dB at 500 Hz.

All dosimeters were set to record at the start of each performance. They were not paused during the intermission and continued running until the end of the show. Musicians were advised not to generate any artifact noises by yelling, breathing heavily towards, or accidentally touching the microphones of the dosimeters.

A total of 27 paired measurements were executed in this study. The attenuation of each shield was calculated as the difference of the sound exposures in dB(A) measured by the dosimeters located on both side of the shields.

Measurements were performed in a real work situation, meaning that the influence of the location of the shield and the instruments in the perimeter of the player were not taken into consideration. All shields remained at the same location throughout the course of this study. Therefore, it cannot be definitely stated that one type of shield is better than the other because there is the possibility that both types may perform identically when located at the same spot.

The results of individual attenuations measured on both types of shields: W (Wenger) and M (Manhasset) are shown in Figure 1. There were significant variations between individual tests, but we found overall a better performance for the Manhasset shields, compared to the Wenger. Table 1 shows a summary of the results for both shields. 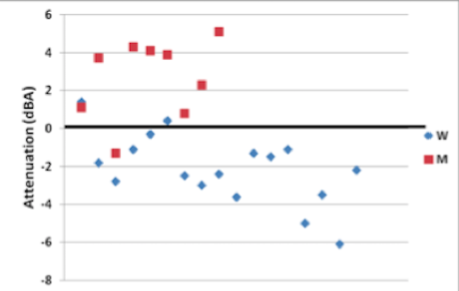 Table 1. Results of the measurements.

We were also interested in the variation of attenuations for a given shield (and same setting) during different performances. For that reason, the attenuation of some shields was repeated 2 and 3 times. The average of the variations was 2 dBA, while the range was 4.0 to (– 0.4) dBA. Therefore, variations were within the range of the accuracy of a field noise measurement and are not considered significant.

As shown in Table 1, the average attenuation of all shields pooled together is negligible.

There are several controlled and uncontrolled variables, generally unavoidable in a study of this kind that makes it difficult to come to general conclusions.

The size of the shield’s surface area is too small compared to the distances from the source to the shield and from the shield to the receiver. This gives way to a large diffraction effect around all 4 edges of the device. Therefore, the flow of acoustical energy around the shield becomes as significant as the flow through the shield thus reducing the resulting attenuation.

The distance and the location of the head of the player behind the shield also vary during a music session due to the fact that musicians move around in their chairs during performance, resulting in an ever larger diffraction effect.

Another factor is the sound from the musicians located on the sides of the protected colleague. The shield not only offers no protection from these musicians, but may even increase their sound exposure due to sound reflected from the shields. In those circumstances, the sound of the instrument behind the musician is not as important as the lateral and the front contributions, thus reducing the benefit of the shield. Sound reflection is a significant factor contributing to musicians’ elevated noise exposure, and this is especially true for those musicians seated close to the walls of the pit. The fact that the shields are made from polycarbonate, which is a reflective material, contributes to those reflections

Other than the issue of the sound coming from reflections and other musicians, there is also the sound generated by the protected musician himself that contributes to his exposure. (This may explain some or all the negative attenuation results obtained in the present study).

Results also show a significant difference between the attenuations from both types of shields. This is probably caused by the difference in the size of the Plexiglas boards. The Manhasset’s surface is almost 50% larger than is the Wenger’s, and this is something that may explain the difference in attenuation.

Finally, for this population, the attenuation was found not to be significantly different between different sessions. This appears to indicate that players do perform at approximately the same sound level between performances. Qian et al. arrived at the same conclusion that the inter-performances’ variations are not significant.4