The Case for Tablet Audiometry 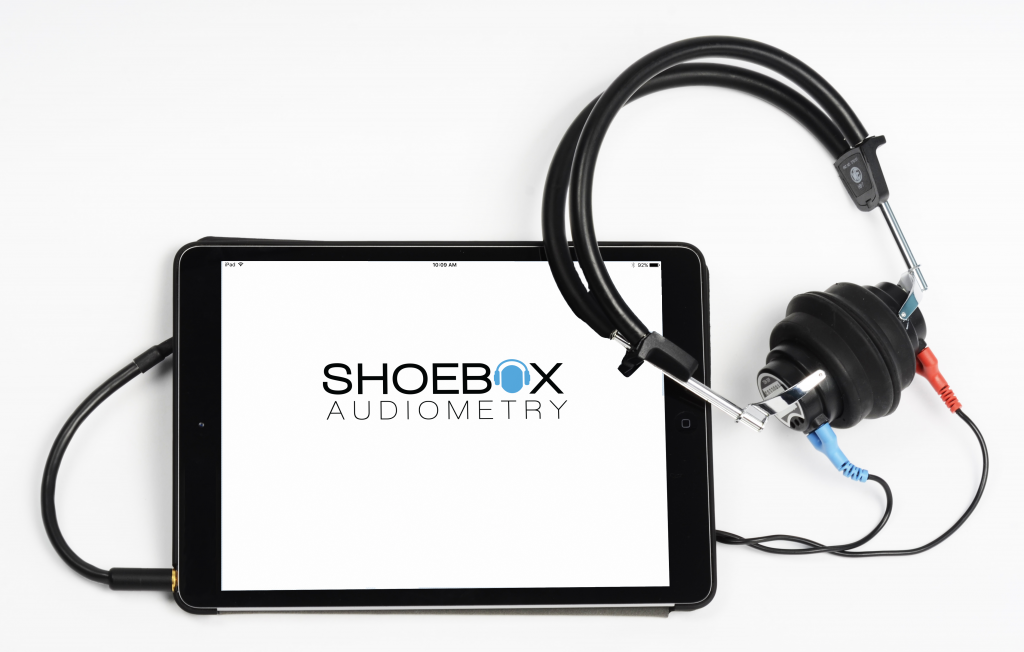 It was a revolution in communication and one that lay the foundation for technological advances such as the smart phone. In 1876, Alexander Graham Bell patented the telephone. It was not his only scientific contribution, albeit his most famous one.

Bell witnessed the impacts of hearing loss firsthand. His mother lost her hearing as a child and his wife was deaf. Additionally, his grandfather, father, and brother all worked in areas associated with speech and hearing. This exposure and subsequent interest led him to develop the first audiometer in 1879. Around that same time German physician, Hermann Ludwig Ferdinand von Helmholtz, invented an electrically driven tuning fork to measure hearing sensitivity.

Shortly thereafter, just before 1900, Carl E. Seashore introduced what we now know as a traditional audiometer. His device relied on battery power, and functioned by presenting a series of clicks. Seashore’s invention established the foundation of hearing testing methods that we still abide by today.

The commercialization of hearing technology came about in the 1920s. Western Electric developed the first commercially produced electronic audiometer. The price tag for the technology, fifteen hundred dollars, about the same as the price of a house at the time, kept it out of reach for many. 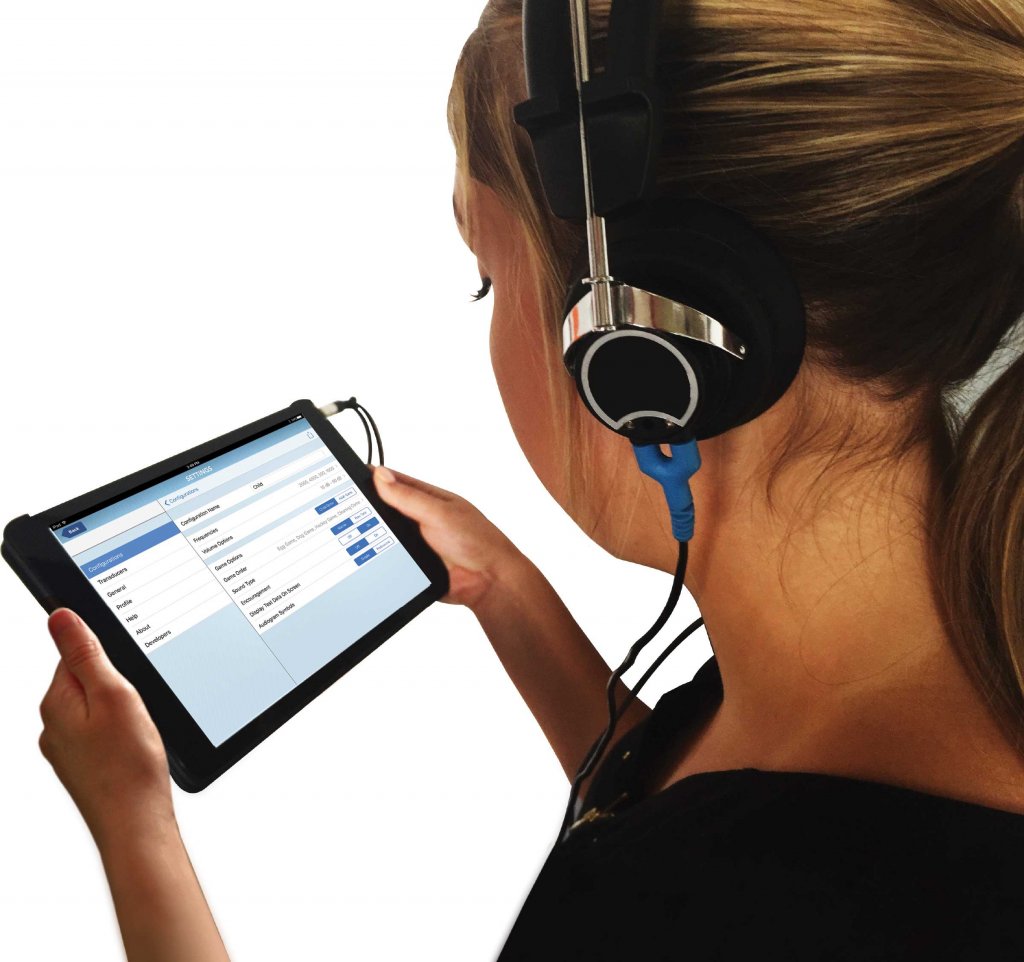 The introduction of the jet engine during World War II further propelled hearing research. The Army Air Corps noted that hearing loss from the sound of jet engines could occur in a short period of time making "verbal communication impossible and caused a series of physical manifestations." These findings led the US Air Force to publish its first regulation on hearing conservation in the late 1940s. Advancements in hearing health continued to rise including the development of more portable audiometers in the 1950s.

This added portability served as a valuable tool to audiologists, bringing hearing testing out into the community, but they were not without their limitations. Many still required a power source and a modicum of expertise to operate. For those that worked off of battery power, the added weight was restrictive. While weight is often still an issue today, many portable versions provide basic testing ability but lack the advanced functionality we have become accustom to in modern-day audiology. Lastly, the data output when using portable audiometers is typically handwritten audiograms, which has inherent data management limitations. 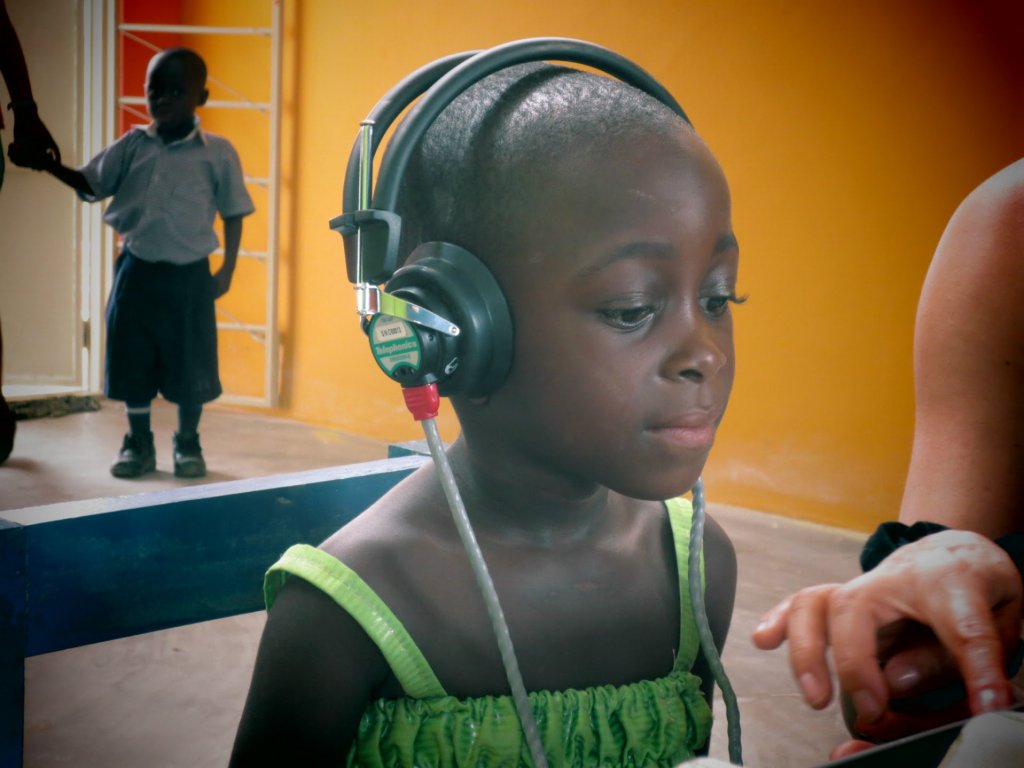 Enter the 21st century and the rise of the tablet computer.

Microsoft was first on the scene with its new portable computer, followed by the launch of Apple’s revolutionary iPad in 2010. Tablets have changed the way we communicate. Small, compact, and lightweight, these “data centres on the go” transformed information technology almost overnight. It wasn’t long before the medical community began to take notice.

With the invention of the tablet-based audiometer comes a new revolution in hearing health care. Innovative thinkers recognized that the mobility and true portability of these powerful computing devices could be used to rethink the way audiometers are used. Composed of software, a tablet, and a set of calibrated headphones, a new evolution in audiometry is being realized.

The most advanced tablet audiometry systems offer ambient background noise monitoring that is helping to usher in an era of “boothless technology” in hearing testing. They are compact, ultra-lightweight, and do not need an external power source to function. Many tablet audiometers offer multiple testing methods including manual and automated modes. In manual mode the system is fully controlled by the tester, to help meet the specific testing needs of the patient and/or the environment. In automated mode, the system functions in a game-like fashion – the patient virtually tests themselves using pre-set configurations. In this mode, non-hearing professionals such as teachers, nurses, family physicians, and therapists can administer testing. Because of its simplicity, this new way of testing is opening doors for hearing evaluation, reducing potentially long wait times to see an audiologist, and thus getting people the help they need sooner. 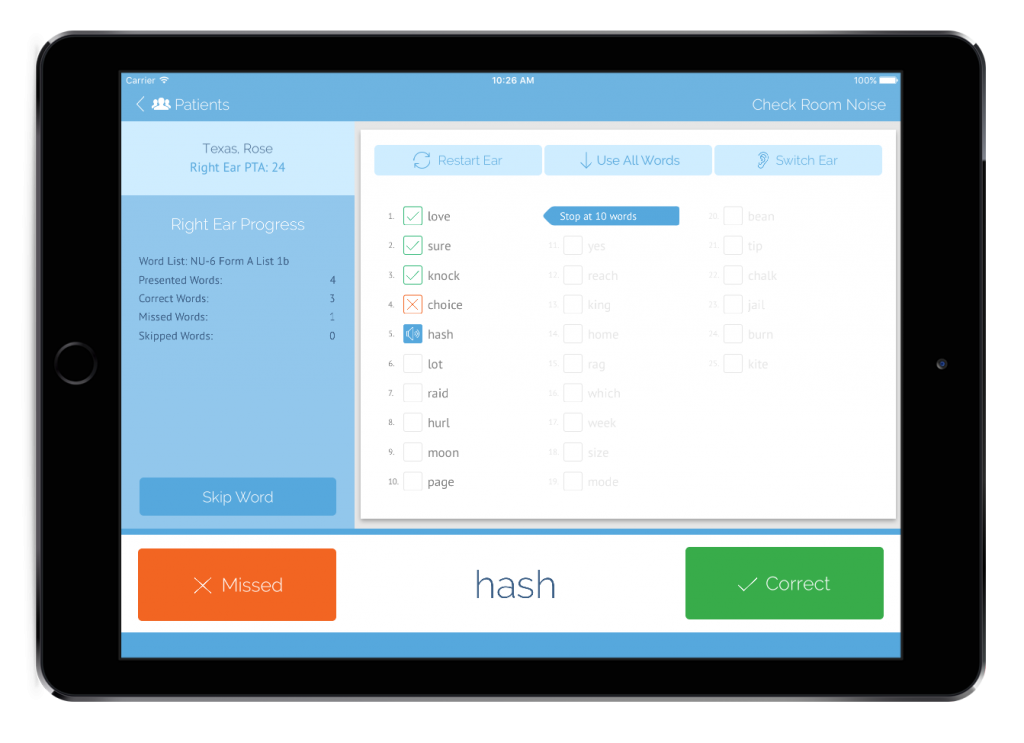 Another added benefit of tablet audiometers is that although they can function in offline mode, adding WiFi connectivity means that data can be organized and stored in meaningful ways. Furthermore, data can be backed up to compliant storage services, shared among health care providers, and easily moved to other reporting systems such as electronic medical records. Vast amounts of data can be gathered, stored, and analyzed for hearing health research or for managing historical employee records. Tablet audiometers can also offer advanced functionality such as integrated speech discrimination testing, hearing health questionnaires, and central auditory processing testing. From a clinical validity standpoint, established tablet audiometers often conform to the various technical and privacy requirements stipulated by ANSI, OSHA, and HIPAA. Several systems have been systematically evaluated and you can find a multitude of peer-reviewed research papers supporting their clinical validity.

Today, tablet audiometers are changing how hearing health is managed. This is a landmark development in the evolution of audiology. They are being actively used in over 50 countries worldwide for a variety of reasons including clinical evaluation, tuberculosis treatment monitoring, school screening, rural testing, humanitarian missions, occupational hearing programs, and more. I’d like to share a few of my personal experiences using tablet audiometers in non-clinical settings. 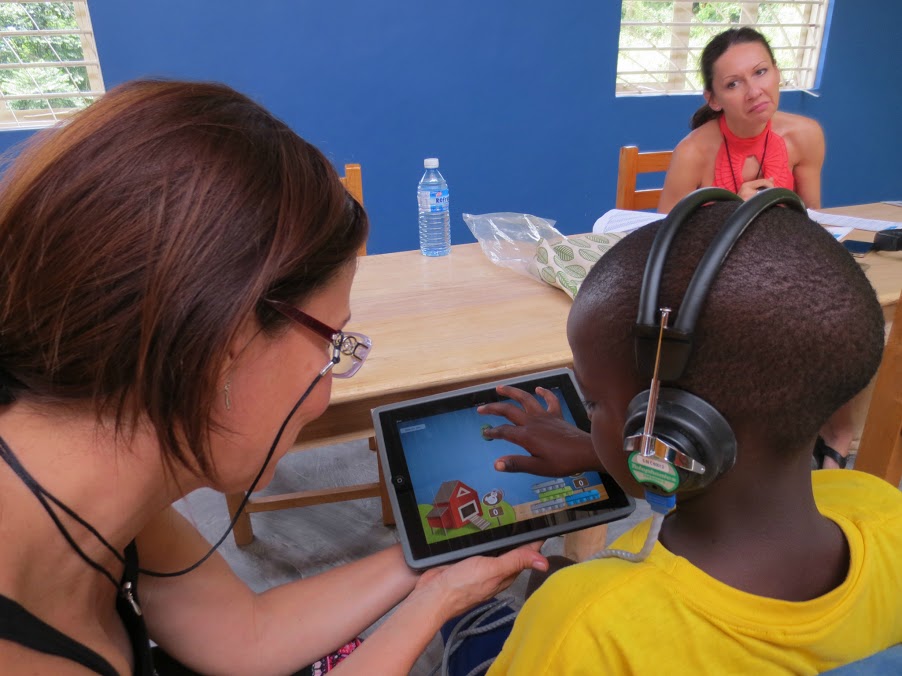 Last year, an Ottawa-based initiative called iHear was born at the University of Ottawa Faculty of Medicine. Under the guidance of Dr. Matthew Bromwich, an otolaryngologist at the Children’s Hospital of Eastern Ontario (CHEO), a team of approximately 40 medical students volunteered to go into local primary schools and test the hearing of students in grades 1 and 2 using SHOEBOX Audiometry. SHOEBOX is a clinically validated tablet audiometer. The medical students were responsible for managing and executing all aspects of the program, and for ensuring that appropriate audiological and medical follow up pathways were established in advance. Over a 3-month period in early 2015, 251 students were screened for hearing loss. 12 students were detected with hearing-related concerns with one of those found to have a profound loss in one ear. All 12 students have since been referred to an audiologist for further evaluation, and an ENT specialist when warranted. The exciting news is that three other Canadian cities are coming on board in September 2016: Halifax, Saskatoon, and Montreal. As an advisor and an active participant on the original iHear program, I can say that testing outside of a sound booth does present unique challenges. In some of the schools, we were set up to perform our testing in the library. While we were in a generally quiet room, we just so happened to be positioned at a table under a relatively loud fan. Moving our testing station 10 feet away was enough to reduce the ambient noise at 500 Hz sufficiently to be under the Maximum Permissible Ambient Noise Levels (MPANLs) stated by ANSI. In these types of settings, transducer selection takes on additional importance, where passive and active noise-cancelling headsets are helpful options.

Also, even though tablets are generally considered ubiquitous amongst a student population, and many have been playing iPad games since they were toddlers, some children under the age of 5 could struggle to maintain their attention for the duration of the test. I would not recommend leaving children of this age to self-administer the exam, but rather employ a hybrid of the game and tester assistance. Providing regular encouragement and taking short breaks will help you successfully complete the tests in a reasonable amount of time. Older children, however, will find the gameplay interface of these systems engaging and they generally do not have any problems completing the tests with minimal supervision. In fact, we have seen evidence that testing using these methods is often preferred over traditional equipment. 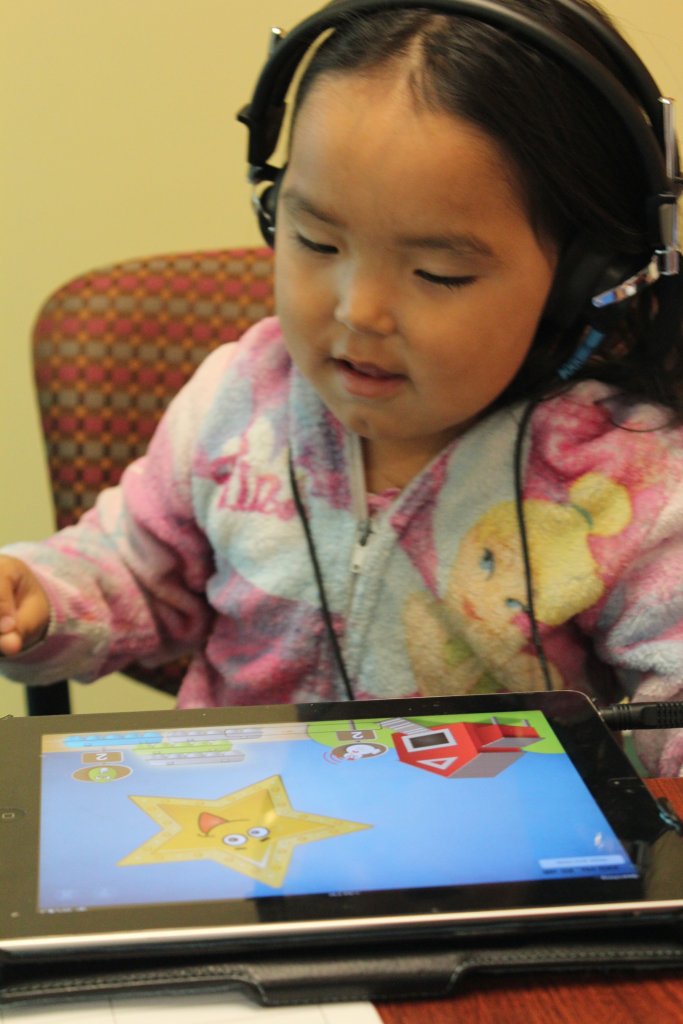 In another example, I had the recent pleasure of visiting a pharmacy where a small clinic had been set up to provide complimentary hearing evaluations for local older adults. We have all read the statistics that on average 1 in 3 adults over the age of 65 suffer some hearing loss. We wanted to help newly identify individuals who might be struggling to hear, and help get them referred to an audiology clinic for follow-up care. What I learned was that many of the people we tested had never interacted with an iPad, and had not yet been exposed to the “drag and drop” activity that is so common with a tablet. Limited dexterity made this a potentially frustrating action for this population. In this case, the simple workaround was to have the individual verbally or physically indicate when they heard the tone, and we would manipulate the iPad, and “drag and drop” the icons on their behalf.

In my final example, we move out into the field. I have been working closely with several of our customers who are using SHOEBOX Audiometry for both humanitarian missions and ototoxic monitoring clinical trials. One of the amazing benefits being realized when using a tablet audiometer in these types of settings is the vast amount of data being collected in an electronic fashion. Patient demographic information and test results are stored, and backed up to a central, encrypted storage service. This development opens up new, exciting avenues to be able to aggregate and analyze a global database of hearing health data. The possibility this creates is endless and I could write an entire article on the potential here alone.

In summary, tablet audiometry is improving access by creating new opportunities to identify hearing loss. From field testing in remote locations, including audiometry as part of your annual visit to the family physician, assessing children’s hearing in schools, and managing onsite occupational hearing programs for your employees, these modern approaches are opening new pathways to clinically valid hearing evaluation. A tablet with calibrated headphones and specialized software including noise monitoring, this simple yet sophisticated technology can administer a myriad of diagnostic hearing tests to a wide array of patients.