Research to Reality Training the Brain: Hearing Aids and ReadMyQuips

More than 10 percent of the population has a hearing loss that affects communication and, consequently, psychosocial health (NIDCD, 2010). This percentage steadily rises with age: by age 65, 40 percent of the population is hearing impaired and, after age 70, almost everyone is hearing impaired (Gates & Mills, 2005). The population segment 65 years and over is projected to rise from 41 million in 2015 to 61 million in 2030 (U.S. Census Bureau, 2014). As audiologists, we have the unique opportunity to help these growing numbers of aging individuals with hearing loss maintain their quality of life through appropriate rehabilitation strategies.

In the auditory system, age-related changes occur anatomically along the pathway from the outer ear to the brain. A common functional problem of age that all audiologists can attest to is the decline in speech perception, especially in noisy environments. This is because speech perception involves an intricate combination of processes from the cochlea to the cortex. Peripheral processes of audibility, frequency discrimination and loudness growth, together with the cognitive functions of attention, memory and comprehension, are necessary for successful speech perceptual outcomes in everyday listening environments. Aging can negatively impact the range of processes required for speech perception (see review in Pichora-Fuller & Souza, 2003).

The first step after diagnosis of hearing loss is to restore audibility through amplification to ensure access to acoustic cues. This may be achieved by using hearing aids or cochlear implants. Today we realize, however, that accessing acoustic cues is an important but often insufficient step in restoring speech perception, particularly among the elderly. Individuals with similar audiograms who receive very similar hearing aid technology do not show equivalent outcomes. Even with the most advanced digital processing hearing aids, problems with communication in noise remain. Offering our hearing aid clients the age-old adage “it takes time to get used to hearing aids” is inadequate service and falls short of what we should expect from ourselves as hearing professionals. In addition to hearing aid fitting, comprehensive aural rehabilitation involves several components tailored to the individual’s needs including: (1) tips to enhance communication, (2) training in the use of special devices beyond hearing aids, and (3) training to use cues that are audible. There is ample evidence to support the benefit of these strategies (Hawkins, 2005; Laplante-Levesque, Hickson & Worrall, 2010). In addition to improvements in speech perception, enhancements are seen in communication function, psychological well-being, health-related quality of life and communication strategies, while self-perceived hearing handicap is reduced (Chisolm et al., 2007).

This article focuses on auditory training, a term applied to formal listening activities designed to optimize speech perception (Boothroyd, 2007). Overwhelming evidence of the effectiveness of auditory training comes from the field of neuroscience. The human brain is not hardwired; it has the ability to change in response to experience. Structural and physiological changes are induced in the brain as a consequence of training and learning. This positive feature, termed “plasticity,” is retained throughout the lifespan, even in adults (see review in Pascual-Leone et al., 2005). Plasticity changes have been documented using behavioral approaches, as well as imaging and electrophysiological techniques. Auditory training is designed to exploit the plasticity of the brain in response to structured stimulation.

Auditory training may be either analytic, synthetic or a combination of the two. Analytic training involves mastery of the building blocks of speech, such as syllables and words; synthetic training emphasizes cognitive skills and global comprehension of the sentence and/or message. While the outcomes of analytic training remain mixed, synthetic training or a combination approach is known to improve sentence recognition and overall communication (Sweetow & Palmer, 2005). Professionals tend not to provide auditory training because of the poor reimbursement and the time required. Yet access to training is now available readily over the Internet at no or very low cost. In fact, today, computerized auditory training is a reality. Training regimens using principles of perceptual learning are adaptable through a hierarchy of listening tasks, provide immediate feedback to users, employ both auditory and visual/orthographic cues, and expose listeners to multiple talkers. Auditory training yields a small but reliable change in speech perception. Other advantages may include reduction in self-reported hearing handicap or communication difficulties; transfer of training to cognitive skills such as attention, reduced listening effort and improved multisensory integration; and benefits beyond improved speech perception and communication, such as quality of life.

There are several commercially available auditory training programs: Listening and Communication Enhancement (LACE) and ReadMyQuips (RMQ) are two examples of online programs designed for adults with hearing loss (Sweetow & Henderson-Sabes, 2004; Sense Synergy, 2015). LACE is a self-paced training program using a combination of analytic and synthetic approaches. Training includes listening in noise, listening to fast talkers, and listening in the presence of competing speech. In addition, speed of processing, use of contextual cues and memory tasks are targeted. Participants also receive helpful communication tips throughout the training period. Improvements in perceptual skills as well as cognitive skills have been documented (Sweetow & Sabes 2006; Olson, Preminger & Shinn, 2013).

A training program available to users of MyStarkey* is RMQ. Trainees are engaged in modified crossword puzzles, in which each box of the puzzle is to be filled with a word (not a letter) and each row or column with a witty quip. Puzzle “clues” are video recordings of one of four speakers reciting the quip to a selected row or column of the puzzle in the presence of background noise. RMQ relies on audiovisual training, which has been shown to be superior to auditory training alone in enhancing auditory perceptual learning (Bernstein, Auer, Eberhardt & Jiang, 2013). The program employs a hierarchy of signal-to-noise ratios (SNR), making the listeners’ tasks more challenging as performance improves. Consequently, listeners must progressively suppress distracting noise and rely on visual cues to maintain their performance levels. Difficulty ranges from 1to 16; one is almost quiet and 16 is the most unfavorable SNR. Listeners can replay the video clip and can also right-click on a box at any time to view the target word. 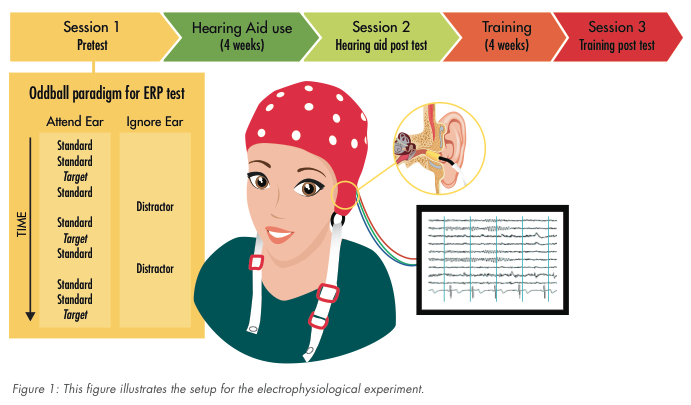 Investigation of the Efficacy of ReadMyQuips

Auditory training has been shown to transfer positively to enhanced detection of untrained stimuli and produce prolonged cognitive performance improvements (Sweetow & Sabes 2006; Ferguson, Henshaw, Clark & Moore, 2014). In a collaborative project between the University of Minnesota and Starkey Hearing Technologies, benefits of auditory training using RMQ after amplification were investigated. A selective attention paradigm was employed in which participants were asked to focus on task-relevant sounds (targets) while suppressing task-irrelevant sounds (distractors). Auditory event-related potentials (ERPs) data were collected using tonal stimuli. The setup used to present stimuli and collect electrophysiological data is shown in Figure 1. Speech perception was assessed using the Hearing in Noise Test (HINT).

In the electrophysiological experiment, participants were asked to identify a unique sound (oddball) heard among a stream of standard sounds in one ear, while ignoring a salient, attention-grabbing sound (distractor) presented to the other ear. The task evaluates selective-attention function by measuring target detection in the face of auditory distraction. Auditory training in noise is directly related to the cognitive ability of auditory selective attention. We evaluated the effects of amplification after four weeks of hearing aid use and after RMQ training. Participants in the control group engaged in active listening to books on tape and were tested later on their listening comprehension. The goal of the study was to evaluate the generalizability of training to the cognitive skill of auditory selective attention (Moore & Amitay, 2007; Green & Bavelier, 2003; Sweetow & Sabes, 2006; Ferguson et al., 2014) in individuals who were first-time hearing aid users.

Participants were adults ranging in age from 49 to 85 years. Their hearing loss ranged from mild in the low and mid frequencies to moderate and severe in the high-frequency range. HINT testing was conducted with hearing aids. Electrophysiological testing was conducted without hearing aids but with the volume adjusted for easy listening. All participants passed the mini mental state exam. A total of 22 participants completed the study with 11 in each group, namely experimental and control. Participants engaged in RMQ for at least 30 minutes each day for five days a week for four weeks. This same schedule was followed by participants listening to audiobooks. Participants were provided with laptops to complete RMQ training and listening activities. 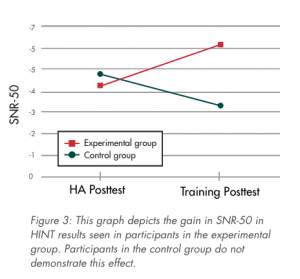 Speech perception testing using the HINT did not show statistically significant change after four weeks of hearing aid use but before auditory training. Although amplification has an immediate positive impact on communication function and users report subjective benefit with hearing aids (Chisolm et al., 2007), consistent effects on speech perception tests have not been documented in studies of acclimatization (Dawes, Munro, Kalluri & Edwards, 2014; see review by Turner, Humes, Bentler & Cox, 1996). However, after the hearing aid trial, we found a significant change in the ERP (referred to as the P3a) that is linked to the involuntary orienting towards distracting stimuli. Amplification seems to have led to an improved ability to suppress distractors; the salience of distractors was reduced after only four weeks of hearing aid use. Plasticity changes in ERPs brought about by amplification use may explain, at least in part, the cognitive basis for subjective benefit reported by hearing aid users. This reduction in P3a is depicted in Figure 2.

RMQ uniquely led to benefits in speech perception in noise as measured via the HINT. This benefit revealed in the HINT was not seen in participants in the control group. This interaction is plotted in Figure 3. In the auditory selective attention task, we were unable to rule out practice effects as both training with RMQ and listening to audiobooks resulted in improved target detection behaviorally. RMQ training effects were subtle, though, with participants displaying improved confidence in target judgments post training. 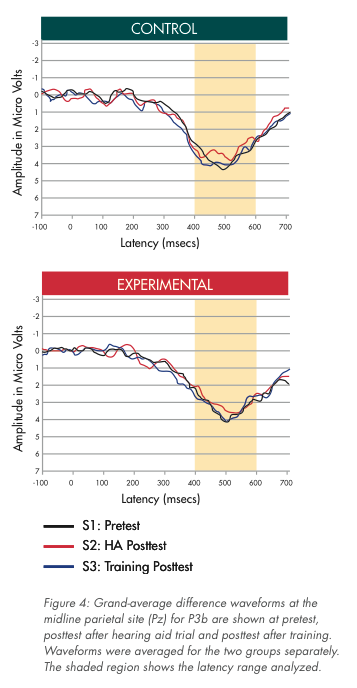 Overall, the amplitude of ERPs associated with target categorization (referred to as the P3b) did not change; this is shown in Figure 4. However, the change in amplitude of P3b was correlated with change in accuracy of target detection, but only for participants who received RMQ training, suggesting use of a specific cognitive strategy. This finding is not surprising because RMQ training occurs in the presence of noise, directly recruiting auditory selective attention skills. The correlation also revealed that some participants did not benefit from training. Unfortunately, we did not track the difficulty level that participants achieved in RMQ training. Also, we did not have a method to score the puzzles. Given the adaptive and listener-friendly format of the training, it is possible that some participants did not challenge themselves enough in terms of listening at poorer SNRs. These are some variables that need to be tracked to possibly improve outcomes. Neither amplification nor training influenced speed of cognitive processing; ERP latency effects were not significant after amplification and after training.

The implications of our research for audiology practice are many. We understand that amplification can help in fine-tuning auditory selective attention skills by reducing the distracting effects of noise. Counseling points for clients include the following:

The author wishes to acknowledge the following team members at the two sites who helped enthusiastically in the completion of this project in an efficient and timely manner: Luodi Yu and Yang Zhang were collaborators at the University of Minnesota; Dania Rishiq, Harvey Abrams, Sandy Jobes and Ryan Irey were counterparts at Starkey Hearing Technologies. I also wish to thank my mentor, Robert Melara, who helped with the design of the electrophysiological experiment.

National Institute on Deafness and Other Communication Disorders. (2010). Quick statistics.