Who is the REAL “Father of Audiology?”

Originally posted at HHTM On March 13, 2013. Reprinted with permission. 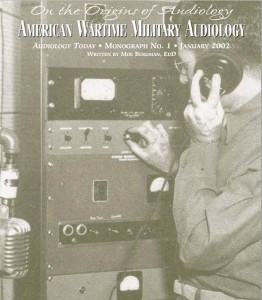 Around the world there is usually one individual that stands out as the person that began the profession of Audiology in their respective country.  These are often those that came to the US, or in later years, other countries as international students and took the profession home and began its practice.  These individuals are often thought to be the “Father or Mother of the profession” in their part of the world. There are many individuals that have taken the field and spread it across the globe serving the hearing impaired. Our Hearing International quest this week is to review the beginnings of Audiology to find that person that began the profession or became the true “Father of Audiology”.

As professions evolve, Audiology developed rather rapidly. With roots in the speech sciences of the 1920s and 1930s and the basics of audiometry by C.C. Bunch, the profession really got its start during World War II in the treatment of hearing impaired American veterans. Newby (1958) presents that the first use of the word Audiology has been traced to Trainor and Hargrave (1939). The term Audiology, however did not get regular use until 1945 when Raymond Carhart, then an Army Speech Pathologist and Norton Canfield, an Army Otologist applied the term to the field which had been created through the tow fields of specialization that these men represented. Probably best historical discussion of the development of Audiology during the World War II period is a 2002 Monograph to Audiology Today titled, The Origins of Audiology: American Wartime Military Audiology, by Dr. Moe Bergman. Dr. Bergman, along with his contemporaries, lived the infancy of Audiology. A time when there were many basic questions and very few answers about auditory evaluation and rehabilitative treatment of the hearing impaired. Bergman’s treatise reads like a virtual “Who’s Who” of Speech and Hearing in the 1950s, 60s, and 70s and should be on the reading list for every basic audiology course worldwide. It was this group of Audiology pioneers and their clinical experiences, developed in the shadows of War, that shaped the profession in their publications, textbooks, teaching, research, and leadership that molded Audiology into a robust, research based, clinical profession. While these professionals developed their skills during the War, the postwar period marked the advent of tremendous technological growth, the use of transistors and such that led to the development of tools for assessing the levels of sound individuals were exposed to, degrees of hearing loss, and in the development of smaller hearing aids. While all of these pioneers substantially contributed the development of the profession one individual, Dr. Raymond Carhart, clearly stands out as  the undisputed worldwide “Father of Audiology”. This week Hearing International focuses on Dr. Raymond Carhart (1912-1975), lest we forget our roots………

Raymond Theodore Carhart was born on March 28, 1912, in Mexico City, son of Raymond Albert and Edith (Noble) Carhart. There is not much public information as the Dr. Carhart’s childhood and early education but he received a Bachelor of Arts degree in Speech and Psychology from Dakota Wesleyan University in 1932, and went on to finish Master of Arts (1934) and Doctor of Philosophy (1936) degrees in Speech Pathology, Experimental Phonetics and Psychology at Northwestern University. A student of CC Bunch, he was one of Northwestern’s first PhD graduates — in speech pathology, experimental phonetics and psychology. Dr. Carhart remained at Northwestern with the title of Instructor in Speech Re-education from 1936 to 1940. In 1940 he was promoted to Assistant Professor and in 1943 to Associate Professor. The following year he joined the Medical Administrative Corps, U. S. Army, as a captain, ultimately serving 7 years in the Medical Administrative Corps. During the War, Dr. Carhart served as Director of the Acoustic Clinic and as Acoustic Physicist at the Deshon General Hospital in Butler, Pennsylvania until 1946. One of the three facilities designated for hearing rehabilitation during the War period.  After World War II, he then returned to Northwestern where he became Professor of Audiology in 1947, a position he held until his sudden death on October 2, 1975. In 1948 Carhart was appointed Assistant Professor of Otolaryngology at the Medical School in recognition of his work on the Chicago Campus; he was made a full Professor in 1952.

He may be best known for developing and refining speech audiometry, the measure of hearing ability, particularly as it pertains to the efficiency of hearing aids.  Most of us remember the “Carhart Method” of hearing aid evaluation that was the “tried and true” technique for about 40 years.  While this method was proven to be unreliable and invalid in the 1980s, the technique offered extreme face validity and patients still ask why we do not do this type of an evaluation for hearing aid fittings today.  Although his life was cut short he has lived on through his many students that became the pillar of the profession, conducting their own research, writing the textbooks, direct audiology programs, founding associations, such as the Academy of Dispensing Audiologists (recently changed to the Academy of Doctors of Audiology), American Academy of Audiology and the Academy of Rehabilitative Audiology. His students became generally the teachers of my Audiology generation.

As a student or a professional, I did not have the opportunity to meet Dr. Carhart, but I have had the opportunity to meet and work with a number of his students that have carried on his legacy.  One of my favorite Carhart quotes is part of his introduction to Mike Pollack’s first edition of Amplification for the Hearing Impaired in 1975 and it suggests his love of the clinic and those that practiced the profession.

“The researcher can gather fact after fact at his leisure until he has a sufficient edifice of evidence to answer his question with surety.  How different is the clinician’s task.  He too, is an investigator but the question before him is, “What can I do now about the needs of the person who is seeking my help at this moment?”  The clinician proceeds to gather as much data as possible about his client as he can in a clinically reasonable period of time.  He does not have the luxury to wait several months or years for other facts to appear.  The decisions of the clinician are more daring than the decisions of the researcher because human needs that require attention today impel clinical decisions to be made more rapidly and on a basis of less evidence than do research decisions.  The dedicated and conscientious clinician should bear this fact in mind proudly.  His is the greater courage.”

In the words, of Dr. Jay Hall, another of Carhart’s students, “stumbling into Northwestern University [circa, 1972] was one of the luckiest breaks in my life. The students were top notch, the academic setting stimulating and, best of all, I was among a Who’s Who in Speech Pathology and Audiology. I was assigned reception desk duty to earn my stipend and each day I had the opportunity to greet the notables who entered the then new Francis Searle Building, including the "Father of Audiology  – Raymond Carhart.”