Over the past few years, hearing aid signal processing has progressed to the point that for some listening-in-noise conditions, speech understanding for individuals with hearing loss is equal to or better than their peers with normal hearing.1 Hearing aid technology, however, continues to improve. One area where advancements are still needed relates to automatically achieve the best possible match between the listener’s intentions and the hearing aid’s processing. This can be enhanced by improving the importance functions given to speech and other environment sounds when originating from azimuths other than the front of the user—that is, more precise identification and interpretation of the acoustic scene. To address this issue, an enhanced signal classification system recently was developed for the Signia Xperience hearing aids. This approach considers such factors as 1) the overall noise floor, 2) distance estimates for speech, noise and environmental sounds, 3) calculation of signal-to-noise ratios, 4) estimate of the azimuth of speech, and 5) analysis of the ambient modulations in the acoustic soundscape.

Clinical evaluation of the effectiveness of this new signal classification and processing system recently was reported by Froehlich et al.2 The participants were fitted bilaterally with two different sets of Signia Pure RIC hearing aids, which were identical except that one set had the new dynamic soundscape processing that is present in Xperience. The listening scenario was designed to simulate a situation when the hearing aid user is engaged in a conversation with a person directly in front, and a second talker, who is outside the field of vision, enters the conversation. This is something that might be experienced at a restaurant when a server approaches. The target conversational speech was presented from 0° degree azimuth (female talker; 68 dBA) and the background cafeteria noise (64 dBA) was presented from four speakers surrounding the listener (45°, 135°, 225°, and 315°). The unexpected male talker (68 dBA) was presented at random intervals, originating from a speaker at 110°.

The authors report that the participants had little trouble understanding the conversation from the front, with median ratings of 6.5 (maximum=7.0) for both instruments. There was no significant difference between the two types of processing (p>.05) for this condition. For the talker from the side, however, there was a significant advantage (p<.05) for “new processing on” for speech understanding, and also for ease of listening. See Figure 1 for mean data.

While the significant findings from Froehlich et al2 are encouraging, it is reasonable to question if this new enhancement of speech from the sides could be detrimental to the effectiveness of the instrument’s binaural beamforming narrow directionality. That is, the processing has to be precise enough that unwanted signals from the sides are amplified as little as possible when the listening intent involves a narrow directional focus to the front.

Since its introduction with the binax platform in 2014, Signia’s Narrow Directionality has been the industry leader in optimizing speech understanding in background noise. For example, in 2016, a major manufacturer stated that they had developed a new speech-enhancement algorithm which “exceeds and supplants traditional directionality and noise reduction protocols.” A clinical study of speech-in-noise recognition (using the American English Matrix Test; AEMT), conducted by independent researchers at the Western National Centre for Audiology, London, Ontario, compared the findings obtained with this comparative product to those obtained with Signia primax.3 The results showed that competitive new technology fell significantly below the performance obtained with the Signia product (SNR difference =1.5 dB; p<.005).

During this past year, two major manufacturers have introduced new hearing aid models with new technology, reporting that the new technology has improved processing for speech recognition in background noise. Again, a head-to-head competition was conducted; in this case, the Signia product was the Nx.4 Again, the target speech material for the speech recognition measures was the sentences of the AEMT, with the target signal presented from 0°, and the competing noises from 7 loudspeakers surrounding the participant. The three brands of hearing aids were tested in three different noise conditions: Traffic noise (78 dBA), Cafeteria noise (74 dBA) and competing talkers (68 dBA). 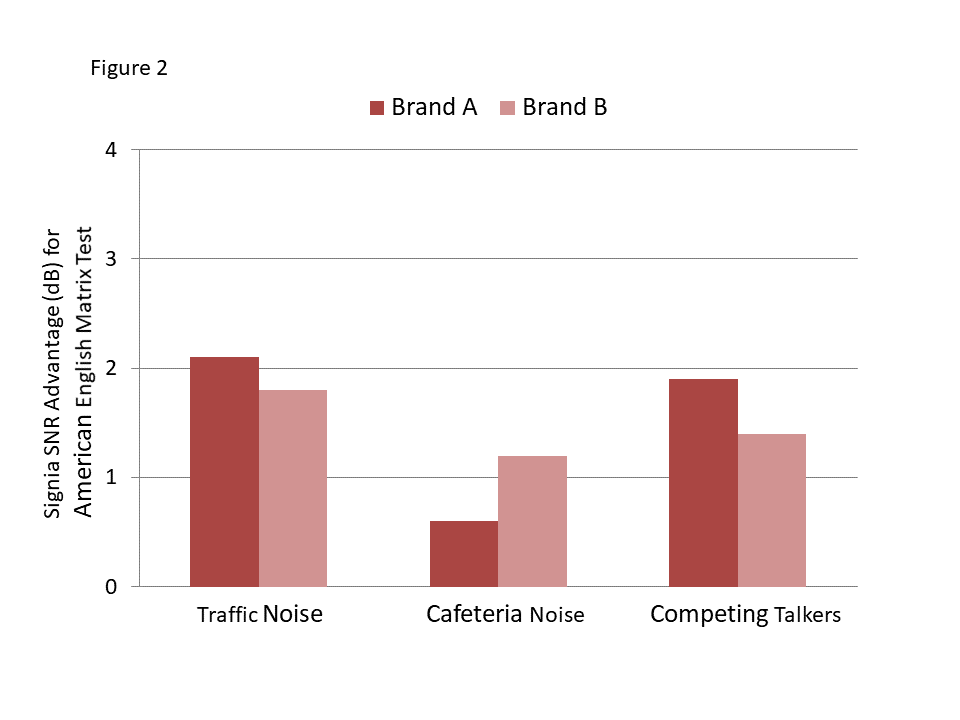 As mentioned earlier, the Signia Xperience platform must maintain a high level of speech-in-noise performance previously demonstrated with the Signia Nx. The expected finding would be that the speech recognition performance obtained using Narrow Directionality would be the same for the two instruments. The purpose of this research was to determine if this was true.

The research was conducted at the University of Northern Colorado, Greeley, Colorado, under IRB approval. Individuals meeting the selection criteria were recruited from the clinic files and were paid for their participation.

A total of 15 adults (9 males, 6 females) participated in this study. Participant ages ranged from 49-81 years with an average age of 67.3 years; all were experienced users of bilateral amplification. All had symmetrical downward sloping sensorineural hearing losses, with a mean audiogram ranging from a ~30-35 dB loss in the lower frequencies (250 to 1000 Hz), to a mean ~60 dB impairment in the high frequencies (3000 to 6000 Hz). All testing was conducted with the participants aided bilaterally.

The hearing instruments used in this study were the premier RIC models of Signia, Xperience Pure, and Nx Pure. The hearing aids were fitted with closed-fitting double-dome ear tips. For each participant, instruments were programmed to the NAL-NL2 prescriptive method (experienced user, bilateral fitting), verified with probe-microphone measurements and adjusted to be within +/-5 dB of prescriptive targets from 500 to 4000 Hz. Using the Signia app, the directivity of both products was set to the most pronounced directivity to the front.

The test paradigm used in this investigation was identical to that used in the Branda et al4 research discussed earlier. The array for the presentation of the target and competing speech material consisted of 8 loudspeakers surrounding the participant, equally spaced at 45° increments, starting at 0° (i.e., 45°, 90°, 135°, etc). The participant was seated 1.5 meters from all loudspeakers in the center of the room, directly facing the target speech signal at 0°. The target speech material for speech recognition measures was the sentences of the AEMT. Three different background noises were used, specifically selected to vary in intensity, spectrum, and degree of informational masking. The noises were as follows (dBA levels represent the overall output of the seven loudspeakers measured at the position of the head of the participant): traffic noise presented at 78 dBA, cafeteria noise (no identifiable speech) presented at 74 dBA and competing talkers presented at 68 dBA. The competing talkers were sentences of the AEMT presented uncorrelated from the seven surrounding loudspeakers.

Each participant was tested consecutively with the same product for the three different noise conditions. The order of the noise condition was counterbalanced, as was the ordering of the two different hearing aid models.

This study consisted of the comparison of two different Signia platforms, the Nx, and the Xperience. The focus of the research was to ensure that the Xperience maintained a high level of speech-in-noise performance which had been demonstrated by the Nx in previous research. The sentences of the AEMT, scored for SRT-50, were presented in three different background noises: traffic noise, cafeteria noise, and competing talkers. The resulting individual SNRs for each condition were used for analysis. In linear mixed models testing of the effects of the hearing aid and noise conditions, there was no main effect of hearing aid (Nx vs. Xperience, p = 0.282) and no interaction between noise type and hearing aid (p = 0.922). In other words, we see no evidence of a difference between the Narrow Directionality feature when used in either the Signia Nx or Xperience hearing aids. As we would expect from our earlier study, there was a significant effect of noise type (p = <0.0001), with the highest (worst) SNR in the competing talker scenario and the lowest (best) SNR in the traffic noise scenario. These findings are displayed in Figure 3. 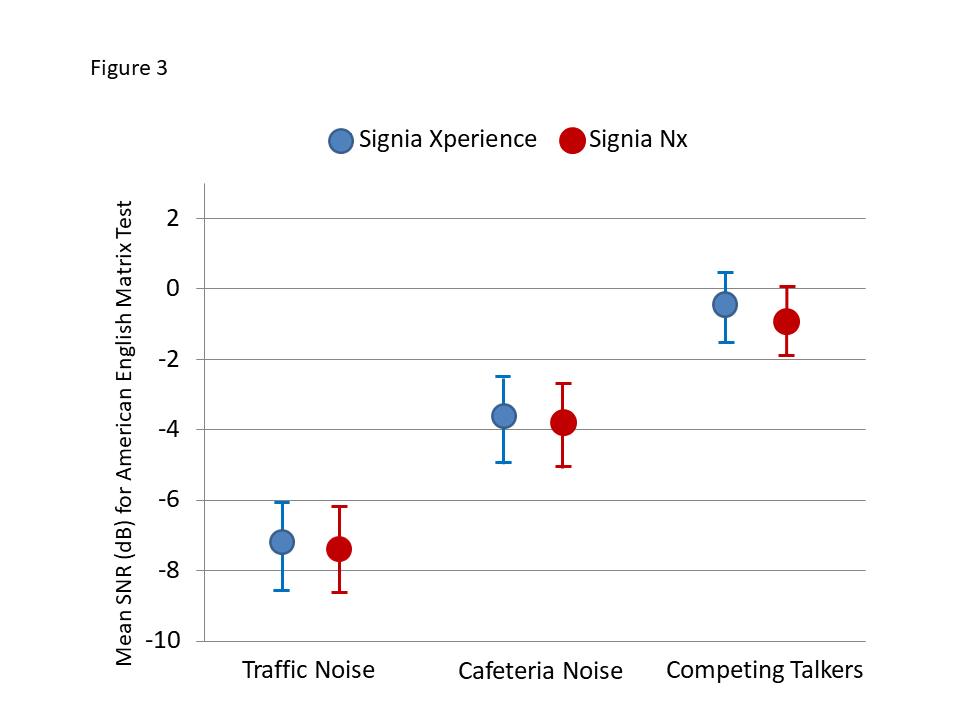 Recent signal processing developments from Signia have included features that involve a focus on speech other than that which is in front, enhanced ambient awareness, and also the specific listening needs when the hearing aid user is moving. As reported by Froehlich et al2, Signia Xperience provides very encouraging results in all of these areas.

The purpose of the current research was to ensure that the Narrow Directionality feature of the Xperience was equal to that of the Nx model—previous research has shown that the speech-in-noise processing of the Nx is superior to that of premier models from competitive manufacturers. Indeed, the results of this research revealed that there was no difference in the speech recognition findings for the two different instruments. This allows us to reasonably assume that Xperience also is superior to the competition for these important listening conditions. For those who were questioning if it is possible to obtain excellent soundscape processing for speech, while still maintaining a high level of narrow directionality, the answer is yes.