Preamble: I, like many of our members, am also a member of other allied groups. In my case, it’s the other CAA – the Canadian Acoustical Association (and yes, I am also a member of the Canadian Automobile Association as well). In a recent issue, there was a discussion about the effects of wind turbines on people’s health. The authors bemoaned the fact that the public was frequently confused at public meetings held in Quebec about this because they confused sound pressure and sound power… well, I too was confused so Alberto Behar was asked to unconfused me.

Let’s dig a little bit deeper. As the philosophers in the antiquity used to do before getting into their long and deep discussions (at least that is what we are told so): let us start by the beginning. And, and the beginning, there are the definitions.

To better understand the concept of power, we will start by describing another basic concept – the acoustical energy. It is described as a form of energy associated with the vibration or disturbance of matter. Sound is a mechanical wave and as such consists physically in oscillatory elastic compression and in oscillatory displacement of a fluid, generally air.

Sound power is the energy rate – the energy of sound per unit of time generated by a sound source. It is measured in Watt (W). Sound power of a source is the total power emitted by that source in all directions. As such, it describes the source and is independent of its surrounding. As an example, a small compressor located in a small room, will be quite noisy. Not so if it is located in a large auditorium, since its sound power remains the same wherever the compressor is located (provided nothing internal changes). Figure 1A shows our compressor in the small room. The sound level will be quite high. In Figure 1B we have the same compressor (same sound power) in a larger room, where the sound level will be lower.

What about power level? Well, the same as with sound pressure, we like to compress the enormous range of sound power found in real life into something more manageable. For that purpose we use the decibel notation, where

The relation between the weakest sounds pressure that we can hear and the one that can destroy our inner ear cells is almost 1:1,000,000. Quite large and difficult to manage, right? Transforming sound pressure to SPL implies the same mathematical procedure used for sound power that reduces this relation to only 120 decibels (dB). Decibels are easier to measure and use. (You may want to refresh your knowledge of Sound Pressure and Sound Pressure Level. An easy way is by going back to the article “Let's Talk Basics!” published in Canadian Audiologist where it was treated more extensively, including the concept of dBA).

Is there a relation between SWL and SPL? Yes, there is. But before writing it right away, let’s analyze what is happening with our compressor from Figure 1 and the noise it is generating. We stated above that the SWL is something that belongs to the source and is independent of where the source is located. We also stated that the noise in the larger room will be lower than this in the smaller one. What we mean by “noise” is simply the sound level (SPL), something that we perceive and measure with the sound level meter.

So, what is going on here? Well, what happens is that the sound pressure level decreases when we walk away from the source of noise. This is related to something called sound intensity that we won’t get into details right now. The net result is that the relation between SPL and SWL is as follows:

One derivation from the above formula is that the sound level decreases by 6 dB every time the distance source – receiver is doubled.

For example a lawn mower (SWL = 100 dB) will generate 70 dB at a distance of 10 m. However, at 20 m the SPL will be 63 dB. And it will be 57 dB at 40 m. One can see that the noise level (and its perception too) is drastically reduced at the beginning, but as one gets further and further from the source, the further reduction becomes unimportant, as it can be seen in Figure 2 (distances are on the horizontal axis and sound levels on the vertical). 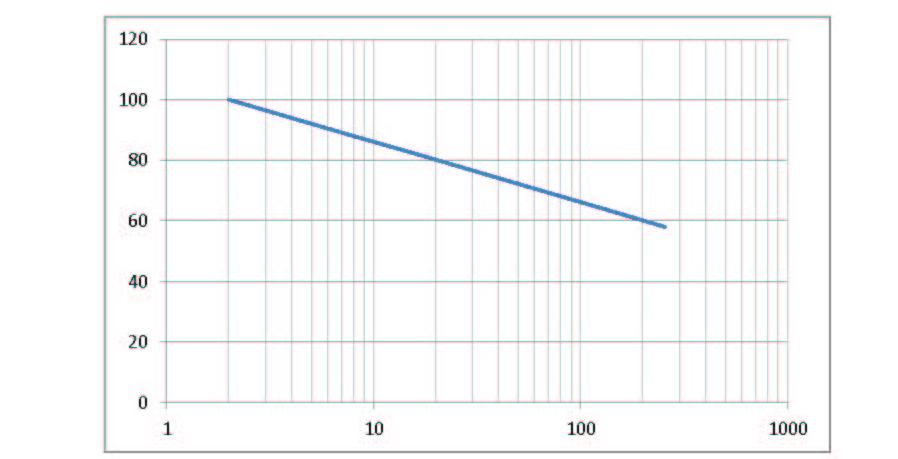 4. What’s the Use (Do We Really Care About) Sound Power?

As mentioned above, sound power is a measure that characterizes a sound source. As such, it is important when purchasing a machine or a device, since it allows for comparison between two products with respect to the impact that it will have in the workplace or the home. Besides, its disclosure is now required by the European Union as well as by Canadian authorities in specific circumstances.

However, in everyday life, it is not needed nor used and as with acoustic intensity, it is confined to the world of acoustical specialists.