The speech intelligibility benefits of directional microphones in hearing aids have been well documented.1 There is little disagreement that hearing aid directionality can be beneficial for hearing aid users in noisy situations in which a user’s goal is to understand speech. Hearing aid manufacturers have various strategies for optimizing microphone directionality including adaptive directionality, binaural beamforming, and automatic steering algorithms. Manufacturers have historically focused their development efforts on technical improvements to directional processing. Technical advances such as binaural beamforming make it possible to attenuate many decibels of background noise, but only under very specific situations. A common goal of most of these strategies is to reduce the need for the hearing aid wearer to change programs manually. By automatically adapting, hearing aids can help maintain speech intelligibility as the acoustic environment changes.

Twenty adults with normal-hearing and 19 adult test subjects with hearing impairment participated in the experiment. Test subjects in the normal-hearing group had air-conduction hearing thresholds of 20 dB HL or better in the frequency range 125 to 8000 Hz, with the exception of 3 subjects with 6 kHz thresholds of 25, 30, and 30 dB HL. Subjects with hearing impairment had mild-to-severe sloping hearing losses. In all but 2 of the cases, left and right air-conduction hearing thresholds were symmetric within 20 dB. Mean audiograms for the hearing-impaired subjects are shown in Figure 1. Additional details about the hearing-impaired test subjects are shown in Table 1. 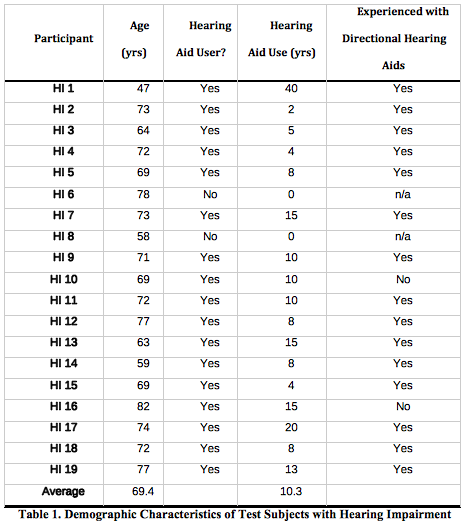 Speech-in-noise testing was conducted using Dantale II, the Danish implementation of the Hagerman speech intelligibility test.6 The test adaptively varies the level of a speech signal, in the presence of speech-shaped background noise, in order to find the point at which 50% of the words are perceived correctly. The sentences are all 5 words long and are all in the form of a person’s name + an action verb + a numeral + an adjective + a direct object.

Four Tannoy i5 AW loudspeakers were arranged around the perimeter of a 2 m diameter circle. Speech material was presented through one of the loudspeakers, and speech-shaped noise was played from the 3 other loudspeakers. Two conditions were tested, as shown in Figure 2, where speech is presented from 0° and noise from 135, 180, and 225°. The listener faced 0° in Noise Condition A (NC A) and faced 90° in Noise Condition B (NC B). When measured at the position where the listeners would later sit, the levels of the speech-shaped noise was identical for each of the loudspeakers.

All test subjects were fit bilaterally with ReSound Verso behind-the-ear hearing instruments, model VO-977. In order to maximize directional benefit, the instruments were fit using completely closed Comply-brand foam earmolds. The hearing-impaired test subjects were fit with the default ReSound Audiogram+ fitting rationale for inexperienced or experienced users, depending on their experience with amplification. Fine-tuning was limited to addressing subjective complaints of loudness. Normal-hearing test subjects were fit with a 10 dB flat insertion gain, as estimated by the fitting software. For all test subjects, adaptive hearing aid algorithms were turned off to the widest extent possible. These included expansion, noise reduction, wind noise reduction, and environmental gain offsets. The only adaptive algorithms left on were those relating to feedback control for the hearing-impaired test subjects.

For Noise Condition A, test subjects completed speech intelligibility tests for OO, OD, and DD modes. Because the test setup was symmetrical, only one of these asymmetric directional settings was tested – the OD configuration. For Noise Condition B, the OO, OD, DO modes were tested. Prior to each round of testing, test subjects also completed 2 unaided practice rounds. This was done in order to reduce the impact of inexperience with the speech intelligibility test.7

Real-ear measurements were performed for all test subjects in order to ensure that the earmolds were tightly sealed and that the level of the amplified sound from the hearing aid was dominant over any direct sound reaching the ear canal. Adjustments to earmold size and placement were made when leakages were detected.

In order to investigate which microphone modes were significantly different, a series of planned comparisons, using single-factor repeated-measures ANOVAs, were then performed for each noise condition and each subject group. The results are shown in Table 2. All comparisons were statistically significant, with each directionality mode being significantly different than OO and with each directionality mode being different than one another (OD vs DD for Noise Condition A and OD vs DO for Noise Condition B). 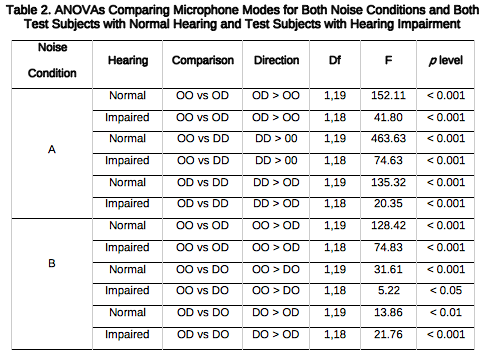 Figure 5 and Figure 6 show the benefit of each of the directional modes over the OO configuration, for Noise Condition A and B respectively. In Noise Condition A, for both normal-hearing and hearing-impaired subjects, both the asymmetric directionality and bilateral directional patterns resulted in better performance than bilateral omnidirectional. The bilateral directional setting provided the most benefit. In Noise Condition B, the DO asymmetric setting performed better than OD for both subject groups. However, the bilateral omnidirectional pattern resulted in better performance than either of the asymmetric patterns. This was expected for the OD asymmetric pattern, but the explanation for the comparison of the DO to OO patterns is less straightforward. However, the difference between OO and OD is less than 1 dB for the hearing-impaired test subjects and thus unlikely to be clinically significant.

These results confirm those found by Hornsby and Ricketts for Noise Condition A, for which they tested in a similar setup.5 The results provide even greater statistical significance, possibly due to the differences between the setups, speech intelligibility tests, and number of test subjects. The results can furthermore be generalized to normal-hearing listeners wearing hearing aids.

Hornsby and Ricketts also tested a setup similar to Noise Condition B, but with the speech loudspeaker located closer to the listener.5 The authors did not find a difference in performance between the bilateral omnidirectional mode and the asymmetric DO mode, but a statistically significant difference was found in the present experiments for both the normal-hearing and hearing-impaired test subjects. Furthermore, Hornsby and Ricketts did not find a difference between the OD and DO asymmetric modes, but the present experiments found a small significant difference, again for both the normal-hearing and hearing-impaired test subjects. The explanation for the differences in these findings could lie in the greater statistical power offered in the present experiments by having used a greater number of test participants. However, there may be other explanations due to differences in the physical setups. Therefore, the reader should use caution when comparing the 2. Rather, the results may be seen as complementary. The position of speech loudspeaker in closer proximity to the listener’s head, in the setup of Hornsby and Ricketts, may have served to increase the amount of attenuation provided by the physical size of the head, and thereby better isolate the left and right ears to the loudspeakers on their respective sides.5 In the present experiments, the ears were possibly less effectively separated from the loudspeakers on their respective sides, perhaps leading to an influence on the left ear in detecting speech from the right side of the head. When the hearing aid on the left ear was set to directional mode, the influence of the attenuation to the speech on the right-hand side may have caused the degradation in speech reception thresholds compared to when the left-hand hearing instruments was set to omnidirectional mode.

Speech intelligibility and environmental awareness are factors that are largely determined by the availability of appropriate auditory input to the ears. Ensuring that the brain receives appropriate input is therefore a critical aspect in providing for natural auditory perception. This could be taking advantage of an improved signal-to-noise ratio for sound coming from in front, but it could just as well be audibility for sound coming from other locations. Traditional directional solutions of bilateral hearing instruments can optimize audibility and beamforming characteristics, but they do not necessary lead to a natural, binaural processing of sound. The underlying assumptions made by such systems are that the signal of interest is stable and predictable, which is not the case in the majority of real-world listening situations. The brain’s remarkable ability to shift attention, based on the hearing aid wearer’s intent, is only usable if the necessary binaural input is provided. This study shows which ReSound microphone modes benefit speech intelligibility, while also demonstrating the importance of the binaural microphone modes that allow the user to decide on the signal of interest.

The experiments here have examined 2 acoustic situations that were previously shown by Hornsby and Ricketts to be challenging for fixed, asymmetric directional programs.5

The authors would like to think Derya Schjerlund Ceylan, Astrid Haastrup, Lotte Hernvig, and Peder Thyme for collecting the experimental data.