Reprinted from: http://hearinghealthmatters.org/pathways/2016/loudness-recruitment-commentary/ with kind permission.

Auditory loudness recruitment at one time was a popular phrase among audiologists. In fact, in some of the early books devoted to clinical audiology, chapters about measuring recruitment, were often a focus (see Katz, 1972). In modern-day audiology, however, recruitment is a seldom used word. I would venture a guess that most of our younger audiologists barely understand clinical implications of the term. Certainly what was known as recruitment back many years ago still does exist. It also, I believe, has strong implications to much of the clinical work that is being done today. Therefore, I thought it was worthwhile to string together this commentary on some of my thoughts, perhaps random, about recruitment and its impact or perhaps, lack of impact on modern-day audiology. It is also interesting, to consider that perhaps what we have known as recruitment for many years, may actually be “brain gain” in the area of modern neuroscience — we will briefly discuss this also.

Abnormal growth in loudness with increases in stimulus intensity is a common definition of loudness recruitment (Carver, 1972). The actual phenomena often does not manifest itself until one reaches relatively high sensation levels. However in all fairness, there has been some different views on this but we will not elaborate on those here other than just to mention that some believe that recruitment may take place at lower levels of intensity. However, classic loudness recruitment is best demonstrated by comparing the ear with sensory hearing loss to the ear in the same subject with no hearing loss. If one is to attempt to balance the loudness between the two ears by alternating stimulus presented to one ear and then the other, notable differences are observed at the lower levels but this difference disappears at higher levels (See figure 1). By definition, the only direct way that recruitment can be measured is by the alternate, binaural loudness balance (ABLB) which is similar what was just described (see for elaboration: Feldmann, 1967). However, the phenomena also appears to also be expressed in difference limen for intensity, the acoustic reflex and even evoked potentials.

Loudness recruitment was first described by Fowler in 1928 (Fowler, 1928). Since then, it has been associated with cochlear dysfunction. In the 1950’s recruitment was the impetus for looking at how it influenced difference limens (DL) for intensity. Individuals with recruitment were shown to have reduced (smaller) DLs than normal hearers. This was, and still is used by some to determine cochlear involvement and major diagnostic test (SISI) evolved from this research (Jerger, Shedd, & Harford, 1959). The recruitment phenomenon also appears to manifest in the acoustic reflex. This is commonly demonstrated by individuals with sensory hearing loss having acoustic reflex thresholds at markedly reduced sensation levels compared to normal. This apparent compression of intensity or loudness if you wish, has been commonly seen in the ABR with normal latency values reached at high intensities for those with sensory hearing loss. Again, these findings with the acoustic reflex and ABR align with cochlear pathology. Therefore the identification of recruitment or its associated phenomena has been a diagnostic tool to help the audiologist in the past. The usefulness of recruitment however, may and should not be limited to the diagnostic arena.

I found it highly curious that while participating in an international symposium on audiology a few years back, a useful comment was made about recruitment and amplification. In this case, a well known researcher related that he thought the ABLB would be highly useful in hearing aid evaluations –yet was not being used; he was observably perplexed as to why this was not the case. The measurement of loudness growth with increases in intensity could be valuable in considering compression and other factors key to fitting amplification properly. The ABLB is of course limited to those who have unilateral hearing loss but could prove helpful for many patients seeking amplification. Identifying the degree of recruitment in a given individual could have important implications across various clinical populations and audiologic techniques.

Though the concept of recruitment and its measurement is indeed important, there is potential controversy about its origin. For years it has been accepted that recruitment was a cochlear phenomenon and more recent views may challenge this. A report in the 1990’s first drew my attention to an alternative interpretation to the origin of recruitment (Henderson, Salvi, Wang, & Powers, 1996). In this report, animals were exposed to noise, creating hearing loss. At the auditory nerve level, this loss was reflected, however at higher levels of the system (inferior colliculus), responses were actually greater in amplitude than recorded from the animals pre-exposure! This also was the time that our psychology colleagues were prominently discussing “brain gain”. Brain gain is the central nervous system’s ability to offset sensory input that is compromised due the damage the sensory system. Is it possible that what we have called recruitment of cochlear origin for many years actually brain gain and a central nervous system property? I will leave it there as further discussion beyond the scope of this commentary.

The recruitment phenomena and its measurement has, and remains an important facet of audiology and should be embraced and further investigated by modern day audiologists. Clinical insights can be gained by its understanding and application. Currently an extremely important question about loudness recruitment is being asked: is its origin central or peripheral (cochlear)? The answer to this question could be profound impacting both basic and applied auditory science. 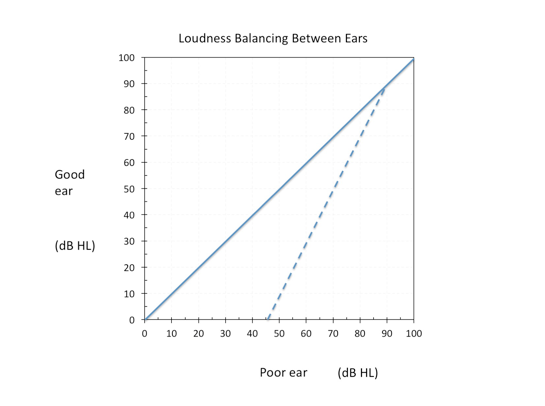