Here are two terms that are frequently misused: sound intensity and sound pressure.

Didn’t we use to talk about the intensity of a Beethoven’s musical passage? Besides, pressure sounds a bit pedestrian, like someone pushing you, while intensity appears more ethereal, sentimental, etc. Also, “intensity” is easier to say since its only one word.

High school physics teaches us that sound is the vibration of the air molecules, that when they impinge on our ear drum elicit the sensation of hearing. This is similar to when the arms of the tuning fork are vibrating, they are pushing the molecules that are touching them. Once set in vibration, they push the molecules in their vicinity and so on. The sound is traveling through the air creating the phenomenon called “propagation”.

What happens to the molecules that are in contact with our tympanic membrane? They cannot move further, because the membrane, as a wall, does not budge. (Well that is not exactly true, since the vibration of the molecule is transmitted with much smaller amplitude to the membrane). The molecules are pushing against a surface, in the same way as our hand may push against a wall. The result is “pressure”, like the pressure of a hand against the wall. In the case of the little molecules, it is “sound pressure” we are talking about. The dimensional units are “force per unit of surface” (N/m2).

But What About Sound Intensity?

This time, imagine a balloon that vibrates- its surface increases and decreases periodically. Here, again, we will have molecules pushing each other and the sound will travel from the balloon outwards, to the surrounding space. It is easy to understand that the further the sound travels its energy is spread over a larger surface, much like the light from a flashlight. Therefore the energy per unit of surface becomes smaller. So, now we can define another sound magnitude: the sound intensity, with the dimensional units being “energy per unit of surface” (W/m2).

For those who like Calculus, energy and force and integral relationships, and this relationship is not unlike voltage and current.

So, in summary, we have two completely different (but related) magnitudes:

One more difference- perhaps the main one from the practical point of view- what we measure using a sound level meter is precisely sound pressure. Measuring intensity is an entirely different ball game that requires sophisticated (and expensive) instruments that not everybody possesses and knows how to operate. And this also includes knowing what to do with the results of the measurement. Every audiologist has seen a sound level meter; very few audiologists have ever seen an intensity meter. The microphone array in an intensity meter is necessary since “intensity is also a vector quantity where the direction of the sound matters as much as its amplitude. In contrast, sound pressure (or sound level) is a scalar quantity where only the amplitude matters.

The figure illustrates a small hand held sound intensity meter. It consists of two microphones set one against the other, sometimes with a mechanical separator in between. 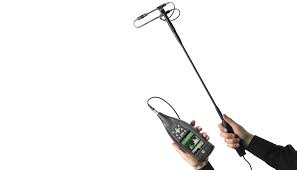 So, what about “levels”? The term “level” implies a mathematical process that reduces the span between the weakest sound pressure that we can hear and the one that can damage our hearing mechanism. This relation is around 1:1,000,000. By using levels it is reduced to only 120 units, called decibels (dB). Decibels are easier to measured and use. That is why the instruments used to measure sound pressure (as well as those measuring sound intensity) do so in terms of dB.

Although the decibels are obtained using logarithms, the dB scale is linear. An increase of 3 dB is equivalent to a doubling of the sound energy. A 10 dB increment sounds like doubling the loudness.

Other than audiologists and engineers working in industrial noise control where the direction of the offending noise is of interest, audiologists will almost always use sound level or sound pressure, rather than intensity. When in doubt, use the terms “pressure”, “sound pressure level” and “SPL” and you will be right 99% of the cases!