Terminology in the 21st Century 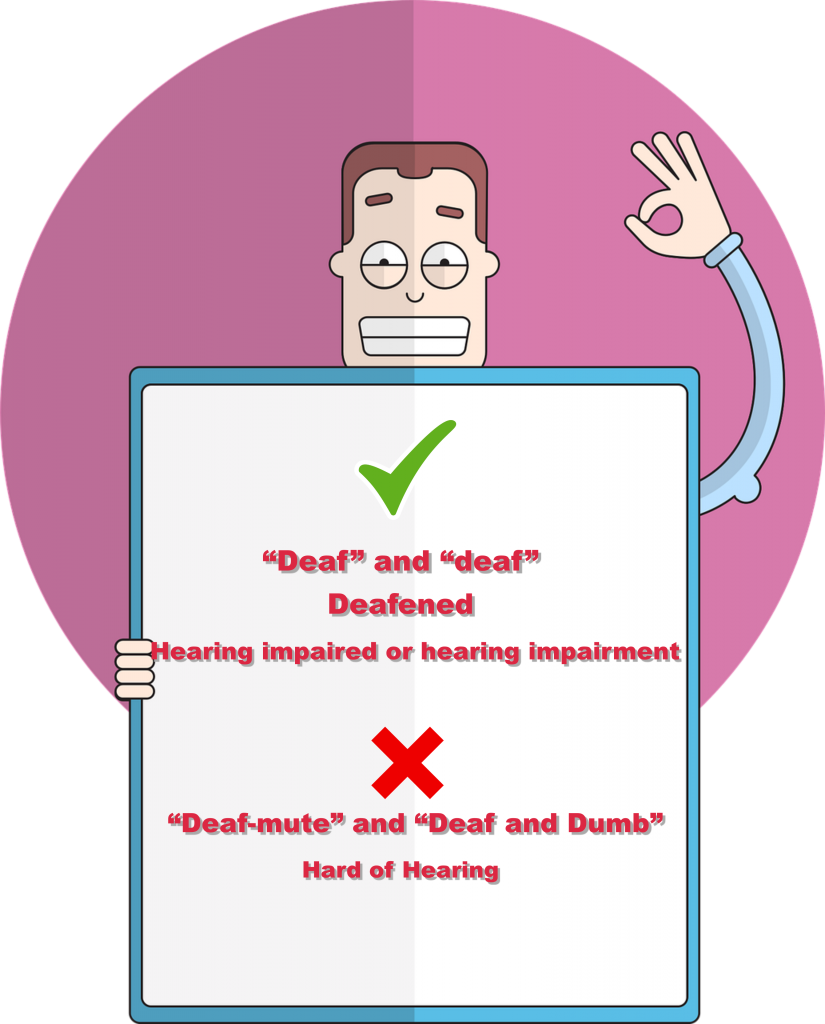 Various terminology is used to describe people with disabilities. The use of certain terms is understandably negative and should be avoided. For example, the terms idiot, moron, retardation, and imbecile were once widely used and accepted terms used to describe persons with varying degrees of intellectual disabilities. The etymology of the word ‘handicap’ is believed to be related to begging for money, and as such is an unacceptable term in professional literature as it implies that people with disabilities cannot be gainfully employed and are reliant on charity.

There are two schools of thought regarding the use of appropriate terminology: Person-centric and identity-first language. The American Psychiatric Association (APA) advocates the use of person-first language. For example, rather than saying “She is schizophrenic,” one should state “She is a person with schizophrenia,” or “is an individual with a mental disorder.” Brown University recommends avoiding the use of the article “the” with the disability such as “the blind." Instead, use "people who are blind.”

Identity-first language proposes a very different philosophy. In this approach, one would use terms such as “the Blind” or “the Deaf.” People who subscribe to this point of view feel that they are claiming their disability with pride. They feel that the disability is a core to their identity and as such wish to celebrate it. We will come back to this later when looking at terms specifically related to audition.

Let us now look at the terms that are used to describe hearing loss. Some of the commonly used ones include Hearing loss, Deaf-mute, Deaf and dumb, Hard of Hearing, Deaf, deaf, Hearing impaired, and Deafened.

In my view, hearing loss is an approachable generic umbrella term. It encompasses conductive, sensorineural, or mixed losses. A review of Internet references does not suggest these terms are negative or derogatory. However, some people have suggested that one cannot have a hearing loss if one was born deaf. That is, if one never had any hearing, to begin with, it was never lost. This reasoning does not seem logical to me for several reasons. First, it is extremely rare for someone to be born with no measurable hearing whatsoever. Second, the brain is set up to receive signals from the auditory system, specifically, the auditory cortex and certain areas of the brainstem. This clearly indicates that human beings were meant to have hearing.

“Deaf-mute” and “Deaf and Dumb” both describe the notion that people with significant hearing loss from birth both cannot hear and cannot speak.  These terms should never be used as they are both inaccurate and of course derogatory.  Most children born with hearing loss, when provided with appropriate auditory-verbal therapy, support and equipment do learn to speak extremely well and go on to achieve high levels of education. Some families choose sign language for their children and can achieve great outcomes.

“Deaf” and “deaf” are considered to be somewhat different terms.  Deaf, when used with a capital “D” (also known as “Big D Deaf”), typically describes members of the Deaf Community who use sign language as their method of communication.  The Deaf Community has its own cultural identity, social groups, drama productions etc. When used with a lower case "d", the term deaf or deafness is a general term to describe all degrees of hearing loss. Typically, the image the term "deaf" conjures up is a person who uses sign language, and therefore, the term deaf, whether capitalized or not, the version more commonly used to describe people who sign and cannot hear.

Many people in the Deaf Community prefer to use identity-first terminology. That is to say that many are not opposed to the term “the Deaf," as their deafness is an important part of their identity and are proud of their unique language and culture. I would never use this term to describe myself as I am neither a member of this community nor do I define myself exclusively by the status of my auditory system. However, I completely respect the Deaf community's choice of terminology.

Deafened is also a term you see out there, and is one of the terms I use to describe my condition.  Typically, it describes someone who has lost most of their hearing post-lingually. However, deafened people may have had their hearing assisted via high-powered hearing aids or cochlear implants.  There are organizations such as the Association of Late Deafened Adults in the United States, so this term is well accepted.

Hearing-impaired or hearing impairment seems rather innocuous. It can be used to describe a condition in which the ability to detect certain or all pitches is either partially diminished or completely missing. However, it fits the medical model of disability which focuses almost exclusively on the impairment and neglects to examine the environmental barriers that could be reduced or the social and attitudinal barriers that result in unnecessary exclusion.

Hard of Hearing officially refers to those persons with hearing loss which permits the use of the auditory channel for a certain amount of speech/language.  People who are hard of hearing typically use hearing aids, cochlear implants, and FM systems.

Personally, I do not like the term Hard of Hearing. The issue I have with the term “Hard of Hearing” is two-fold. First is the image it conjures up.  Specifically, I imagine an old person from the 1930s with a listening tube stuck in the ear muttering “What’s that sonny? I am Hard of Hearin’ and ya gotta shout!”. I find the term archaic, unintelligent, and unflattering. Secondly, the proponents of this term failed to achieve consensus amongst people with hearing loss that this is the correct term that shall be used.

It is interesting to note that in the United States, the group "Self Help for Hard of Hearing" (SHHH) changed its name to the Hearing Loss Association of America (HLAA). This new name has no negative connotations and is generic enough to encompass all people with hearing loss. It is a very welcoming term.

Some people have compared using hearing aids to using eyeglasses. While it is tempting to draw such an analogy, I do not think this comparison works. For most people with glasses, there is nothing damaged or unhealthy about the eyes. Typically, the lenses of the eye are simply not the correct shape. Moreover, eyeglasses do not convert the light energy from one form, digitize it, manipulate it and then attempt to reconvert it back into light energy again. What hearing aids do is far more complex than eyeglasses.

What we can do when it comes to hearing loss is to improve function. By this I mean we can use equipment and communication strategies to allow us to function better in the various communication situations we face. As such, we must look beyond "correcting" hearing by simply amplifying speech at various frequencies and instead examine the client's lifestyle, work, and social needs to ensure that auditory information is provided in the most accessible way possible. This includes strategies to reduce noise that contaminates the auditory signal, and use of visual (sign language, text) or tactile (vibrating alarms, hearing dogs) stimuli. Also, we can use Universal Design principles to ensure that a building, workplace, or even a service can be accessed by all people.

Ok, so my hearing is not normal. Does that make me an abnormal person? Maybe, but frankly who on this planet is completely normal. If you are not the ideal weight, not the ideal height, take medications for some medical condition, you too would not be perfectly “normal” either. Normal is a cycle on a washing machine, but that’s about it.