Dick Salvi as a Workaholic

Editors’ note: We should point out that indeed Dick Salvi works almost 25 hours each day (and 29 hours on Sundays) but it would be misleading to characterize Dick only as a “workaholic.” True, he loves his vocation but has many avocations and is a loving family man whose friends adore him. He seems to be able to fit this all in from 3:00–4:45 AM!

Dick Salvi was my PhD supervisor. He is also my mentor, research collaborator and more importantly, my forever friend. I worked and studied in his lab for more than 8 years (1993-2001), first as a visiting researcher and then as a PhD student, before I got my academic job in Halifax, Canada in 2001.

Interestingly, the first time I met Dick, he was a tourist, not a scientist. He and his colleague, Donald Henderson, were coming to visit my department in the medical school of South-East University, Nanjing, China in the summer of 1989. Unfortunately, this trip did not play out as initially planned: they were refused entry to my university at the last minute, just before they arrived at the gate. This was largely due to bad timing: they visited China shortly after the notorious political chaos of 1989 in Tiananmen Square.

To ensure that their visit to Nanjing was not totally in vain, I decided to accompany them for a tour around the city. Since taxies were not available in my city at that time, I got them two bicycles, thinking it would be the easiest way to get around. However, I was worried if the bicycles would be tough enough to stand up to these large men and if they would be able to ride the bicycles well in my city where there were almost no traffic rules. Everything turned out very well: the bicycles survived these large men (they weren’t ruined after all), and both adapted to the bicycle riding very quickly. The only thing that may have bothered them was that they got too much attention from locals because the occurrence of seeing foreigners was relatively rare at that time. I actually think that Dick secretly enjoyed much of the attention because he thinks that he is handsome (actually he is). Better yet, we got the privilege to ride the bicycles in a big park where it was usually restricted to pedestrians only. This privilege was given largely due to their foreign faces. This was ironic since the political atmosphere at that time in the whole country was not friendly to foreigners.

Dick is famously a workaholic, but he really loves and enjoys what he does. It is a hard job to follow his footsteps, as a research fellow under his supervision. Once upon a time in 1995, we found a chinchilla with very loud spontaneous otoacoustic emissions that could be heard with our bare ears. Dicks led us to run an experiment in which we simultaneously recorded the emission and the responses of single auditory nerve fibers. To fully exhaust the value of this animal, we continued the experiment for more than 36 hours, in which each of us took only a short nap of 1 or 2 hours. However, I don’t remember Dick ever taking a break during this experiment. Fortunately, our efforts paid off with great success earning us a paper in Nature. Of course, we had many cases where the outcomes were not as enjoyable.

Dick also brings his workaholic approach to other countries. He has maintained collaboration with researchers in many countries around the world. From my narrow point of view, his collaboration with Chinese scholars has been most successful. He started to form connections with Chinese researchers shortly after China opened its doors to the world in the 1980s. He started to accept research students from China into his lab in the early 1990s, and he has visited China many times since then on a regular basis. In the past ten years, his collaboration with Chinese researchers has reached a summit. He received 5-year funding from the Educational Ministry of China in 2012 to support his collaboration with the researchers in the Medical School of Southeast University, Nanjing China. In this institute, where I worked as a guest professor from 2011-2017, he was able to fulfill his study on a topic he wanted to do but could not do for many years in the US: the tinnitus-related brain plasticity using functional imaging methods in both human and animal subjects. Based upon the effort in those years, he and his Chinese partner obtained four-year funding in 2017 for key international collaboration from the Natural Science Foundation of China (the main funding resource for scientific research in China). This triangle collaboration (US-China-Canada) is ongoing and appears to be very productive.

Recently, however, I see that Dick has been shifting his lifestyle slightly from being a workaholic to enjoying life. We have seen an interesting view of him other than a scientist. Here is a photo taken of him in Tibet in 2016. 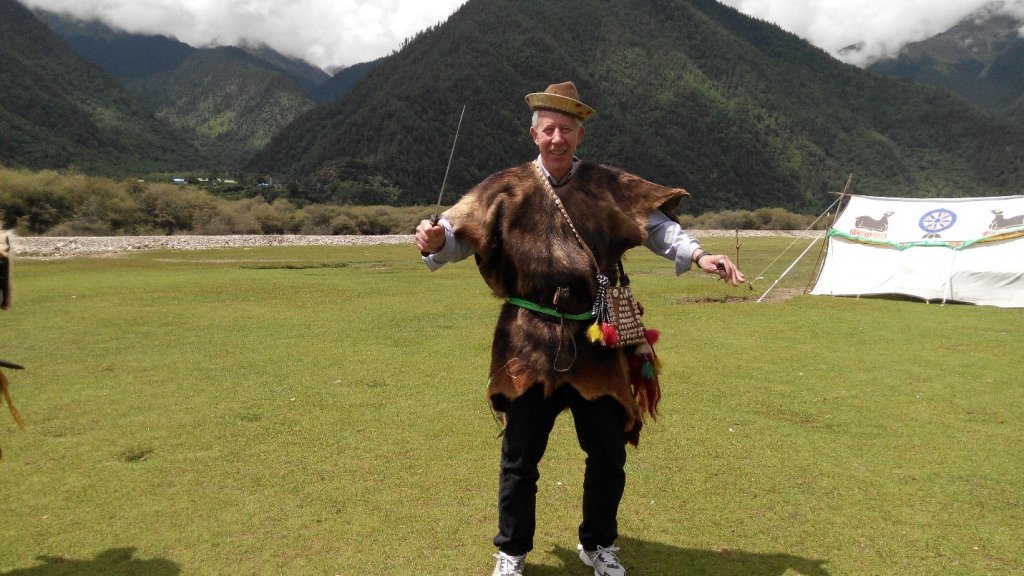