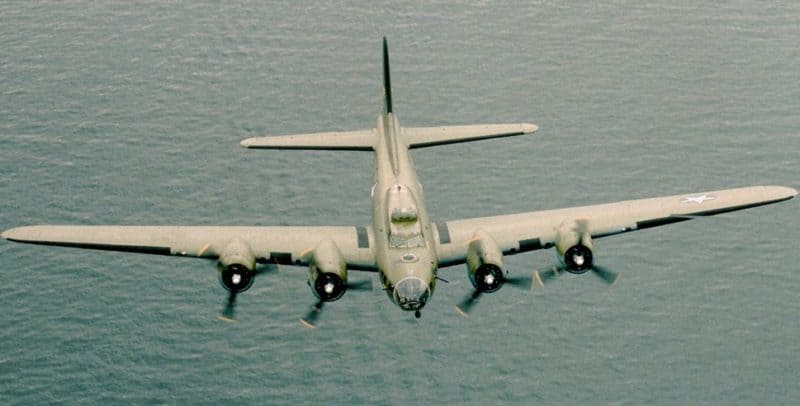 Reprinted with permission from: https://hearinghealthmatters.org/hearinginternational/2018/wwii-bomber-crews-and-hearing-loss-part-ii/ 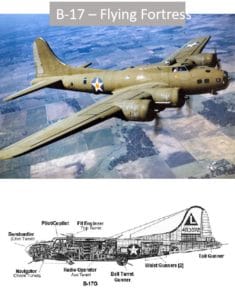 Over the past couple of weeks, I have been investigating the noise levels within the Bombers used in WWII.  After some preliminary research, it appears that there is not a lot of data relative to these levels.  Of course, no one was that concerned about noise levels at that time …. when you are being shot at and not sure you would make it home for dinner that night, hearing loss is kind of on the “back burner”.  Nonetheless, it appears that these measurements have not been conducted or, if published, it was a very obscure place, not known to the pilots. Thus, exposure to the noise levels in these aircraft seem to be, at best, very obscure. Hearing International wants to thank the Museum of Flight, the Liberty Foundation and some others that still fly these warbirds, for their input…. here’s what we have found out so far. 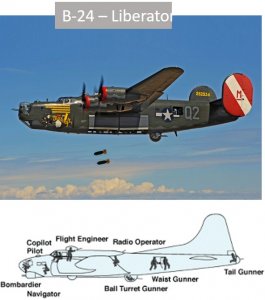 There do not seem to be “cut & dried” answers to the question of,  what were the noise levels in the B-17, B-24 and B-25. Those that fly these birds also indicate that the level of noise exposure would be somewhat different for the various planes due to the proximity of the crew to the propeller blades and, therefore, different members of the crew depending upon their duty station within the plane. So the levels that we may suggest are only guesses based upon the experiences of the occupants of these planes, those that continue to fly them and subjective speculation as to the levels in various areas of the aircraft. 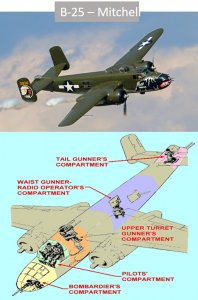 In terms of the noise generated by the airplane itself, Little (2018) indicates that the noise exposure question is more complex than it first appears. In his description of the noise in these planes he suggests that the aircraft noise to which a crewman was exposed would depend their distance from the engine noise. He indicates that the noisiest places would have been those that were the closest to the tips of the propeller blades. (The B-25 might have had the loudest cockpit of any American bomber, because the tips of the spinning propellers were only about a foot from the pilots’ canopy.) On the B-17 and the B-24, the crewmen who were the closest to the propeller tips would have been the pilot, copilot, flight-engineer/top-turret gunner, and, on the B-24, the radio operator. By contrast, I suspect that the tail-gunners would have been exposed to the least noise, simply because they were the farthest from the tips of the propeller blades. 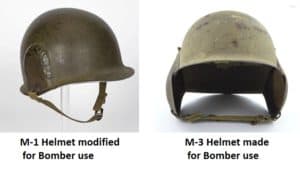 Yet another factor to consider would be the type of helmet and headphones that a crewman wore which were merely regular Army helmets simply modified to accommodate headphones for communication and did not offer much, if any, hearing protection.  The M-1 helmet was used in the early Bomber raids and M-3 Flak helmet designed expressly for Bomber crews appeared in 1943 for the rest of the War. The M3 has large hinged ear covers on its sides to accommodate a communications headset; the covers were lined with felt. Unlike M1 helmets, the M3 features a built in suspension system. The exterior had a flocking coating to prevent the airman’s skin from sticking to the metal at high altitudes and freezing temperatures. 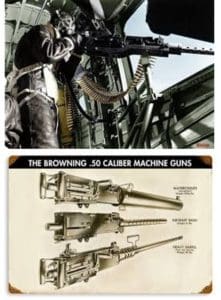 The outfits that sell rides (such as the Collings Foundation) never run the turbochargers, in an effort to minimize wear and tear on the engines. Due to the heavy loads in these planes you needed the engines to be screaming at full power especially for take-off and climb out to altitude. According to the pilots at various museums, the engines were run at full power and the turbochargers were on for much of each mission during World War II.  The high speeds of the engines and, especially, the propellers, is what produced the sound levels that damaged crewmen’s hearing.  Little (2018) further describes another compounding noise factor was the wind noise. He states that “until relatively late in World War II, the waist gunners on B-17s and B-24s fired from open hatches in the sides of the fuselage. He was not sure about the size of the hatches in the B-24 but the hatches on the B-17 measure 36 inches wide by 26 inches high. Considering an average ingress speed of about 165 miles per hour, for up to four hours; plus the egress, at well over 200 miles per hour, that’s a lot of noise for up to 8 hours! He recalls that in a B-17 flight that he was able to stick his head up through the top of the radio compartment. I still remember how loud it was, just from the wind blast – and that was without any turbo boost for the engines.

With its 13 Browning M-2 .50-caliber machine guns posted at Chin, Top, Ball and Tail Turrets, Waist and Cheek guns, the B-17 was indeed an airplane that earned the respect of its combatants. In addition, the flight crews loved the B-17 for her ability to take and withstand heavy combat damage and return safely home.  While it was a safe and robust plane, it was anything but quiet with not only the airplane and wind noise but the during combat, these 13 guns fired often at once with an impulse noise of 132 dB SPL, which when firing repeatedly could have almost been constant for 2 to 4 hours during the mission.  Of course, Chao and colleagues (2013) have suggested that the extremely low temperatures in these planes sometime -40 degrees F could have even increased the noise levels more than that at lower temperatures. 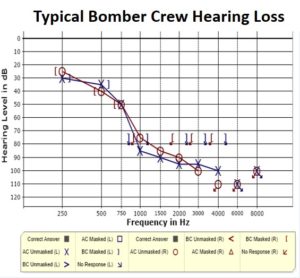 I saw these veterans in the clinic for many years and really could not understand how they could get such a hearing loss in just 25 or so missions over Germany and Italy. Many had been in quiet occupations since the War, but had substantial hearing loss that often did not respond well to amplification. They usually had a severe to profound high frequency sensori- neural hearing loss, poor speech recognition as well as tinnitus many with Loudness discomfort issues. After even a cursory study of the noise levels that were possible in the bombers it is easy to see why there was substantial hearing loss created by these missions. 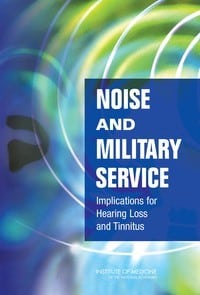 During the 50s, 60s, 70s, 80s, and 90s the Veterans administration did virtually nothing for, not only the bomber crews but most all of these WWII heroes, no matter which branch of service. The WWII veterans and their families with military generated hearing losses were left to the civilian hearing aid market for treatment. Published in 2005, the Institute of Medicine (now called the National Academy of Medicine) carried out a study mandated by Congress and sponsored by the Department of Veterans Affairs to provide an assessment of several issues related to noise-induced hearing loss and tinnitus associated with service in the Armed Forces since World War II. The resulting report, titled Noise and Military Service: Implications for Hearing Loss and Tinnitus, provides findings regarding the presence of hazardous noise in military settings, levels of noise exposure necessary to cause hearing loss or tinnitus, risk factors and timing of the effects of noise exposure, and the adequacy of military hearing conservation programs and audiometric testing. The report recommends steps to improve prevention of and surveillance for hearing loss and tinnitus, and stresses the importance of conducting hearing tests (audiograms) at the beginning and end of military service for all military personnel. The report also outlines areas where additional research is needed, including topics specifically related to military service.  This report was long overdue and very much needed, it changed the attitude of the VA toward hearing impairment for all veterans, especially the WWII heroes. For many, especially Dad, it was too late.