It may come as a consolation to some that even Brian Moore has performed at least one failed experiment. I unearthed this fact while researching the encomium for Brian’s Silver Medal from the Acoustical Society of America, awarded in 2003. The experiment in question was performed some 57 years earlier, when a young Brian had built his own chemistry lab in his bedroom, stocked with sulphuric acid from old car batteries and various mail-order items. The ensuing clouds of choking chlorine gas required a swift exit down the stairs, test-tube in hand, into the safety of the garden.

By the time I started my PhD in Brian’s lab, in the early 1980s, the days of failed experiments were long gone. If anything did go wrong, Brian Glasberg (“BG”) would run the new conditions while Brian dined with the rest of the lab at one of the varied and exquisite lunch venues he favours, and the paper would be submitted by the time the computer had cooled down at the end of the day. At that time the computer really did need time to cool down, being the size of a large desk. (So did the programmer, thanks to the delights of Texas Instruments Assembly Language). Brian had just retired from his programming career, roughly about the time the cassette tape drives were replaced by floppy disks the size of dinner plates. In addition to BG there was a third tall bearded lab-member, leading one experimental subject to refer to “The Three Brians: Brian Moore, Brian Glasberg, and the Brian who is called Mike Shailer.” For many years later, when I visited different labs, people would remark “So, you did your Ph.D. with Brian Moore, then?” the next question occasionally concerned what I may have learnt from the great man, but was usually a terrified “did you ever go out drinking with the three of them?” Brian always claims to have been a reluctant participant, but, whatever the truth, the partnership with BG has of course been extra-ordinarily successful. I recall leafing through the annual cumulative index published by JASA, which listed each author in bold usually followed by a small number of publications in plain type. Searching for an article by Brian I noticed that there was more than a page of plain type after his name, and so idly searched the publication to see if anyone else had been so prolific. I did manage to find one, but that turned out to be BG. Another colleague, when told that he had published as many articles as Brian one year, replied “Yes, but I’m in a mad dash. Brian is running a marathon.”

Fast forward to 2013 when Brian retires, several times it seemed, and many award ceremonies and celebrations of his career followed. These included the BSA Chairman’s Award in 2013, and, in the following year, the Gold Medal of the Acoustical Society. I don’t suppose many of us were fooled by his supposed retirement, or at least we shouldn’t have been. (As Figure 1 shows, the great never truly retire). Two years later he had obtained three new grants and his lab was buzzing. In the seven years since 2013 he has published 143 new articles, which have been cited a total of 1,327 times - more than any of his former graduate students, or, I suspect, anyone else in the field. He’s recently completed a stint as associate editor for Hearing Research and has just taken up a similar role for Trends in Hearing, all the while carving out a second career as an expert witness for court cases. Despite being neither Canadian nor an Audiologist, he thoroughly deserves this special issue, and we all look forward to not quite catching up with his publication record for many years to come. 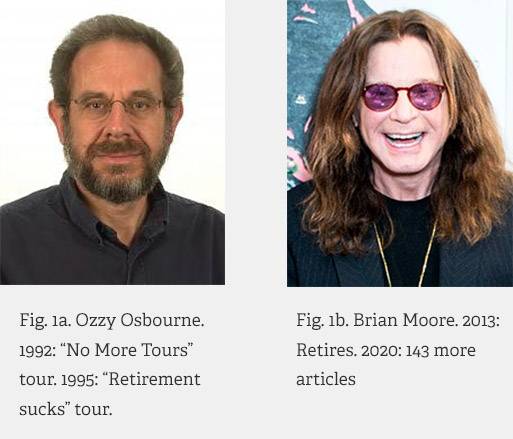