50 years of Audiology Research. Who Could Ask for Anything Moore?

Without a doubt, Brian Moore has been one of the champions of academic audiology. A glance at his publication list attests to a wide range of research interests. His most influential work can be judged by citation numbers. His textbook An Introduction to the Psychology of Hearing is cited 5666 times! He started his career investigating loudness and pitch perception and his work is widely read. I am personally impressed by his studies of auditory-filter shape and bandwidth.

In addition to his rather academic work, Brian has worked on issues more germane to clinical audiology. For example on the design of hearing aids, on detection of cochlear dead regions, and most recently the effect of aging on speech perception.   One indication of academic productivity for a researcher is the h-index. This provides a score based on the number of publications and the citations of those papers. Brian’s score exceeds 100! (Google Scholar). This, seriously, is something to be proud of.

In addition to the research papers, Brian has written many useful full texts relating to hearing loss, such as: “Hearing”, “Perceptual Consequences of Cochlear Damage”, “Cochlear Hearing Loss”. He has always been good at knowledge translation.

Professor Moore definitely stimulated interest in audiology research worldwide and was particularly influential in the UK with the British Society of Audiology. I regret that we did not see more of Moore over here in Canada.

Now for a personal observation. I can't remember ever seeing Brian Moore without a beard. Did he ever shave in his whole life I wonder? The first time I met him was at a scientific meeting at Keele (UK) over 40 years ago. See in the group photo, the young Brian had a beard then. Was his academic success in part due to the beard making him look more serious? Brian also had (at least later in life) a gravelly voice that sounded really authoritative. And, of course, he never got old; he looks the same today as he did 30 years ago. 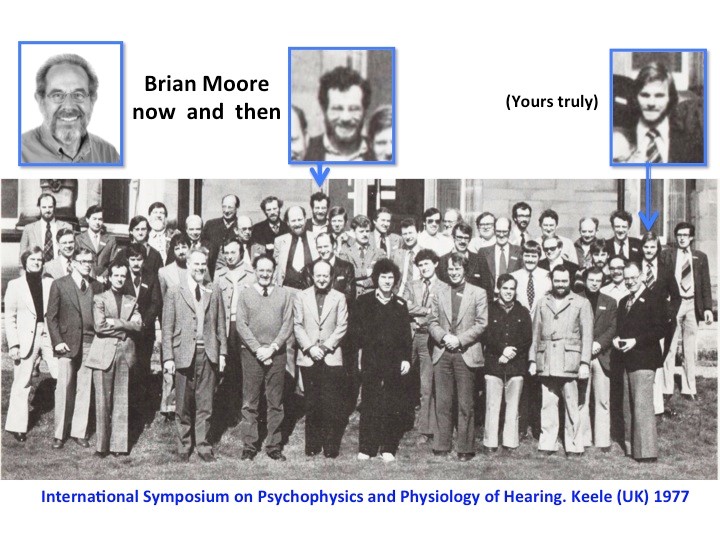 Brian has lasted a long time in academia. He wrote his PhD thesis in 1971 and he is retiring at age 75? That would be 50 years worth of new knowledge to the field of audiology. Well done! Who could ask for anything Moore?