A Temporal Window on the Life of Brian

I was a PhD student of Brian’s from 1987 until 1990, having got a “taste” for the field from taking part in numerous soul-destroying hearing experiments in his lab as a second-year Cambridge undergraduate. Impressed by the sadism of psychoacousticians, I progressed to Brian’s inspiring hearing module in the third year, and to an undergraduate research project under his careful supervision. The premise was elegant: look at all those lovely auditory filters Roy Patterson and I have been measuring using the notched-noise masking technique in the frequency domain; let’s see if we can do the same thing in the time domain with maskers before and after a tone-burst signal. The result was the “temporal window” model of temporal resolution, and a paper that remains one of my, and Brian’s, highest-cited outputs.1 The temporal window is a phenomenological model: there is little direct neurophysiological data to support the central premise of a persistence of excitation over time. However, it is notable that, after near-instantaneous non-linear filtering and compression in the cochlea, the auditory system behaves very much like a linear energy integrator, at least with respect to temporal aspects of masking.2–5 This curious property of hearing, which was revealed by Brian’s approach to non-simultaneous masking, has yet to be explained. 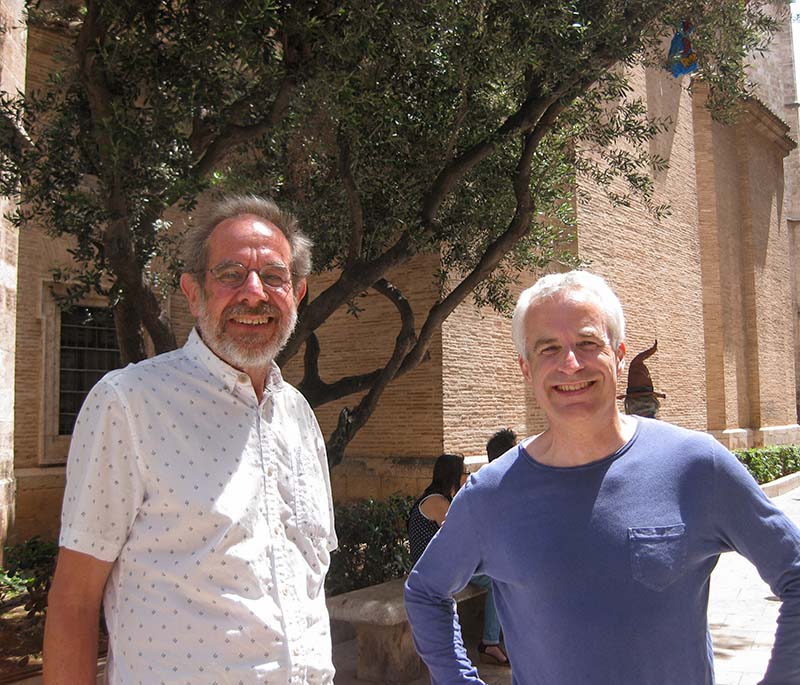 Having been given a kick start in my career on the back of Brian’s genius, I resolved to accept the beneficence of the ear-gods and continue to study for a PhD on the same topic. Brian was an outstanding supervisor. His knowledge is encyclopaedic, he is a brilliant (and remarkably patient) elucidator of difficult concepts, and he is reassuringly calm in a crisis. He was always approachable, friendly, and encouraging to me and to my fellow students. The only aspect I found intimidating was when he ghosted in behind you while you were playing a video game on one of the BBC microcomputers: oh, the shame and remorse! Some of the experimental equipment was of considerable antiquity – how does a main experimental computer with 32 kilobytes of random-access memory sound to you, kids? – but the atmosphere in the open-plan lab was collegiate and inspiring, a perfect research environment. That was all down to Brian’s chilled-but-no-nonsense managerial style. Brian Glasberg and Michael Shailer provided the comedy and technical nous. I loved working there, and I now look back on this care-free period in my life with fondness and not a small degree of painful longing. There was a line on the wall that you were supposed to exceed when standing on your thesis. I was at a clear disadvantage in this respect compared to some of my loftier contemporaries, but I was very proud of the outcome of my collaboration with Brian, even though it fell short by several inches.

Even then, Brian’s output was remarkable, despite being a strict nine-to-five worker. He could write a paper in a morning, have a lunchtime refuelling at the “Grad Pad,” and then design and set up an ingenious new experiment in the afternoon. His many hundreds of highly cited publications are an outstanding legacy, and his books have educated generations of hearing scientists. An Introduction to the Psychology of Hearing, was my bible. I have always tried to emulate his clear, unpretentious, scientific style. Anyone who has seen him speak will know that this clarity extends to his presentations, which are always beautifully judged and delivered.

Brian strides over the field of psychoacoustics like a laid-back colossus, albeit one who wears socks with his sandals. He’s not the Messiah, but he’s a very clever boy. He has made vast inroads into so many different aspects of our field – frequency selectivity, pitch, loudness, temporal resolution, auditory scene analysis, speech perception – as well as contributing greatly to the design and success of modern hearing devices through his translational research activities and industry consultancies. He has received numerous prestigious awards for his achievements, but he remains one of the most likeable and generous people I have ever known. There is no chance I would be where I am today without Brian’s influence and continued support and guidance, and I am forever in his debt.