Sometimes late at night, accountant Laura Weiner thunders through the New River Tunnel in Fort Lauderdale, revving her Harley’s engine. "I love that sound,” she says1. It is what many call the HOG’s sweet sound. But, this sound is not a squeal, and this HOG is not for eating. 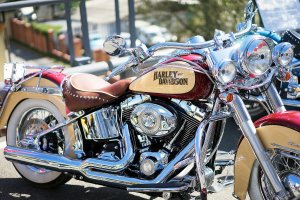 And, evidently, many other motorcycle riders like the sound. In fact, the Harley-Davidson (abbreviated often as Harley) “sound” is one of the Milwaukee, WI company’s main selling points. It is said by Harley riders that it is something no other engine has. But, describing the sound is not easy. It has been described as a “low, guttural growl,” “two long vrooms followed by four shorter vrooms,” like saying “potato-potato-potato during idling,” or other descriptions. Regardless of the difficulty of describing the sound verbally, Harleys are said to have a distinctive design and exhaust note. For those who do not know, Harley-Davidson sells heavyweight motorcycles designed for cruising on the highway.

And, many owners, who often also refer to the bike as a HOG,* tell Harley-Davidson that they buy a Harley just for the sound. It is for this reason that late in 1994 Harley-Davidson made an attempt to trademark the sound. They were concerned that the “thump-thump-thump” of its engine (a noise that thrills or chills, depending on the listener’s attitude toward bikes and bikers), would become a generic term, much like nylon, DuPont’s early synthetic whose name was not protected. Harley-Davidson claimed the trademark was needed because rival manufacturers were trying to mimic the sound. So they filed a sound trademark application for its distinctive V-twin engine sound.

Is the Sound Really That Critical to Harley-Davidson?

Harley-Davidson concentrates so much on its “sound,” that engineers work in “total silence” rooms at their product development lab to identify and isolate where the engine sounds originate. Their goal is to minimize intake and mechanical noise so they don’t intrude on the main sound attraction, the low, mellow exhaust tone, according to Steve Piehl of Harley.

“The mark consists of the exhaust sound of applicant’s motorcycles, produced by V-twin, common crankpin motorcycle engines when the goods are in use”.

Can Sound Be Trademarked?

Most are aware that a slogan, logo, and a name can be trademarked. But, most don’t know that a sound can also be trademarked. For this, the sound must “uniquely identify the commercial origin of the product or service.” This is what Harley-Davidson based their trademark application on. They, and most of their owners, believe that when you hear a motorcycle, its sound is so distinctive that the product is immediately identified, and the Harley sound is distinctive.

Within a year of the application submission, thirteen individuals and companies (including rivals Suzuki, Kawasaki, Honda Motor Co. and Yamaha Motor Co.), requested a delay in the patent office’s ruling in order to present their own comments2. They contended that numerous cruiser-style motorcycle brands used a single-crankpin V-twin engine that produced a similar sound. Their objections were followed by extensive litigation, and finally in 2001, Harley-Davidson dropped their efforts to federally trademark the sound. Their reason for dropping their federal trademark rights was credited to the tens of thousands of dollars in legal costs without an end in sight. Still, Harley-Davidson’s legal counsel claims that they still hold trademark rights in the sound even without a registration3.

Even though the US. Trademark Office never ruled on Harley’s application, some inside the Agency questioned Harley’s ability to prove that its design providing the sound were unique to Harley-Davidson’s bikes. To show how difficult it is to trademark a sound, as of 1998, only 23 of nearly 730,000 active trademarks had been issued to protect a sound, and most of what had been granted were for artificial sound arrangements (MGM lion Roar, NBC’s three-note musical chime, etc.).

Harley-Davidson Vice President of Marketing, Joanne Bischmann, commented on their decision to drop the sound patent trademark saying that its customers know well both the look and sound of a Harley. Its customers would not be fooled by imitations4.

“If our customers know the sound cannot be imitated, that’s good enough for me and for Harley-Davidson.”

Below is the January 17, 1995 application by Harley-Davidson, Inc. to have the sound of their motorcycles trademarked. The spokesperson for the company stated that competitors had attempted to copy their unique sound, which would confuse consumers and undermine the value of their motorcycles.

Mark: MOTORCYCLE EXHAUST SOUND Int. Class No.: 12
To the Assistant Secretary and Commissioner of Patents and Trademarks Washington, D.C. 20231

The above-identified applicant has adopted and is using the trademark described in the accompanying drawing for motorcycles in International Class 12. Applicant requests that said mark be registered in the United States Patent and Trademark Office on the Principal Register established by the Act of July 5, 1946.

The mark consists of the exhaust sound of a Harley- Davidson motorcycle.

The sound mark is emitted when the goods are in use, and three specimen recordings which incorporate the sound mark as actually used are presented herewith. 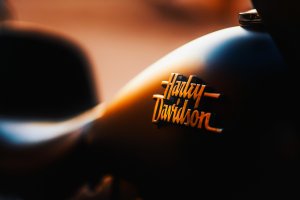 Beginning in 1920, a team of farm boys, who became known as the “hog boys,” consistently won races for the Harley Davidson factory racing team. The group had a hog, or pig as their mascot. Following a win, they would put the pig (a real one) on the back of their Harley and take a victory lap. The bikes were nicknamed “hogs” as a result. In 1983, the Motor Company formed a club for owners of its product taking advantage of the long-standing nickname by turning “hog” into the acronym H.O.G., for Harley Owners Group. Harley-Davidson attempted to trademark “hog”, but lost a case against an independent Harley-Davidson specialist, The Hog Farm of West Seneca, NY, in 1999 when the appellate panel ruled that “hog” had become a generic term for large motorcycles and was therefore unprotectable as a trademark.

On August 15, 2006, Harley Davidson Inc. had its NYSE ticker symbol changed from HDI to HOG.